“Every man has a property in his own person. This nobody has a right to, but himself.”

The forced closure for several months by the Duterte government of all resorts, hotels, restaurants and shops in Boracay, both errant and compliant enterprises, raises the question of private property protection and compensation for the affected private owners.

NEDA has announced that the closure of the entire island from tourism is “very insignificant, only 0.1% of GDP.”

On Twitter, I asked NEDA, DoT, DENR, and Malacañang if they will compensate the losses of the environment-compliant enterprises, especially since the amount is “very insignificant” anyway. Or would the Duterte government not care because this is just tourism in Boracay and not in Davao? As expected, the response I got from the government was the sound of silence.

In 2017, at least 3.7 million people visited the island, less than a million of which came from abroad.

There was also a surge in tourist arrivals in the first quarter of 2018 partly due to cruise ships that visited Boracay. For this year, 27 cruise ships were set to visit the island and some have already canceled.

Tourism is an important revenue earner for an economy or a country. The Philippines being an archipelago with lots of beautiful islands and white sand beaches is unable to optimize this potential yet. For instance, tourism receipts in 2016 was only one-third (⅓) that of Malaysia and Singapore and one-eighth (⅛) that of Thailand.

In terms of visitor arrivals, the nearly six million visitors in 2016 was good enough but at the rate Cambodia is attracting visitors, it might overtake the Philippines in about three years (see table 1). 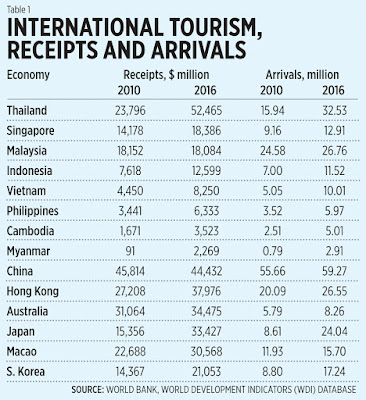 A rising tourism earner in the Philippines is the gaming sector. Huge hotels and casino resorts have sprouted in Metro Manila and more are poised to come in.

A friend who works in one of the big hotels at the Entertainment City told me that the minimum bet at the casino is P2,000; the maximum bet of course is the stratosphere. Only rich locals and foreigners would have the resources to make that kind of bet. The extent of job creation in the casino is very high with lots of workers and security officers being employed.

Revenues for the big hotels and the government-owned gaming regulator and operator at the same time, PAGCOR, are huge (see table 2). 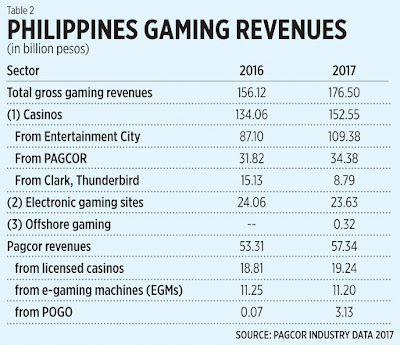 Based on these numbers, one thing is noticeable — revenues from Philippine Offshore Gaming Operations (POGO). These are Philippines-based online gaming outfits that exclusively serve foreign markets and players (which means people in the Philippines cannot access their games). The same friend told me that the bulk of gamers in this new trend are from China.

Two big hotel-casinos are coming to Boracay soon. The timing of their planned entry has added suspicion to the wholesale closure of the island from tourism. It is possible that the forced closure with no government compensation will drive many resorts to bankruptcy and this will open up new space for new players like these two big hotel-casinos.

The Duterte administration’s wholesale closure of Boracay for months is tantamount to indirect expropriation of private businesses. This sends bad economic signals to local and foreign investors. It also sends a bad political signal to the federalism push. The central government purports to give more power to the provinces and regions then it moves to totally disempower them. However you look at it, the move is bad for Philippine business, bad for ordinary Filipinos.
--------------