Matter is energy … Energy is light … We are all light beings.”
— Albert Einstein

Several recent events in the Philippines energy sector which when implemented, might mean an extended and long-term penitence for electricity consumers nationwide.

One is the planned expanded “environmental rights” to be put in the draft Constitution by Retired Chief Justice and Consultative Committee (ConCom) Chairman Reynato Puno. Two, the Energy Regulatory Commission (ERC) meeting with anti-coal groups Sanlakas and Philippine Movement for Climate Justice (PMCJ) with the ERC saying that it will “explore the possibility of incorporating environmental policies into its relevant upcoming policies…”

The ConCom chairman’s plan will open up a floodgate of endless environmental militance. It will be harder for companies to put up new airports and expressways, new malls and commercial districts, new factories and industrial zones, new universities and residential condos, new coal or gas plants because militants and environmental lobbyists can easily assert that the area is “reserved” for nature. But they can easily lobby to put up expansive “green” solar plants, wind farms, etc.

Chairman Puno said the expanded environmental rights will cover “Right to clean air and clean water, right to a healthy environment and ecology…”

If that is the case, government should prohibit candles and gensets in cases of brownouts. Gensets are noisy and run on diesel and hence, very polluting. Candles often cause fires. People should rely only on intermittent wind-solar as much as possible. If the wind does not blow and if the sun does not shine, people will be then left to endure brownouts.

Chairman Puno also said that there will be “stronger writ of kalikasan in the bill of rights so that it may not be subject to withdrawal or revision by the Congress or the Supreme Court.”

This is related to the second event as there are many anti-coal groups which also hate any brownouts that coal plants precisely want to prevent.

In August 2012, a group of ecologist-militants and allied organizations have successfully stopped the construction of a 600 MW coal power plant in Subic on the “writ of kalikasan” argument issued by the Supreme Court. The delay in the construction of that big power plant has contributed to higher price pressure in the Luzon grid in recent years.

Anti-coal activists think that all MW are the same.

Below are some numbers for ASEAN countries from the International Energy Agency (IEA). Demand for power generation is in million tons oil equivalent (mtoe), electrical capacity in Gigawatts (1GW = 1,000 MW), and electricity generation in terawatthours (TWh). 2000 and 2015 data are actual, 2016 are estimates, 2025 and 2030 are projections (see table). 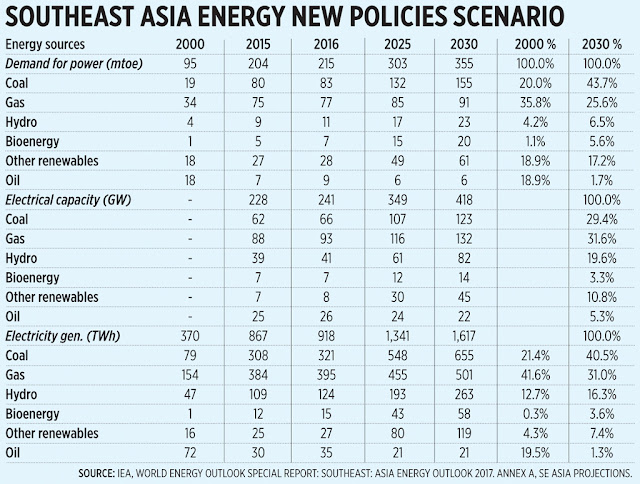 During the S&P Global/Platts’ Philippine Energy Forum last March 20, 2018 at Grand Hyatt BGC, S&P analyst Deepak Kannan observed that from 2000 to 2016 in the ASEAN, “Oil continues to be a dominant source of energy accounting for 34%, coal demand has more than tripled accounting for 17%.”

It is not wise that environmental militance be incorporated in the Constitution. Any environmental advocacy should be done via legislation, not put in the charter. The ERC should also be wary not to commit anything to the anti-coal groups because they hop from one venue to another to promote their ecological-socialist agenda.
----------------