Before the China virus — a.k.a. SARS-Cov-2 which causes Covid-19 — scare, pneumococcal diseases caused by a bacteria called Streptococcus pneumonia and their treatment were in the news. The bacteria can affect people of all ages, from babies to senior citizens, and pneumococcal diseases are a leading cause of death among children below five years old. When the bacteria invade the lungs, they can cause pneumonia and death. They can also invade the bloodstream and cause bacteremia, or invade the tissues and fluids surrounding the brain and spinal cord and cause meningitis.

The best way to combat the bacteria is pneumococcal conjugate vaccine (PCV). The Department of Health (DoH) first procured PCV10 in 2012 — this vaccine protects against 10 strains of the bacteria. Then the DoH shifted to tridecavalent PVC13 in 2014, which protects against 13 strains of pneumococcal bacteria, after the World Health Organization (WHO) cost-effectiveness studies showed that PCV13 is more cost-effective than PCV10. PCV13 was then included in the Philippine National Formulary.

The three bacteria strains not covered by PCV10 are serotypes 3, 6A, and 19A. Serotype 19A in particular is more serious, can lead to meningitis, invasive diseases, and severe pneumonia. Pneumonia is estimated to kill over 50,000 people in the Philippines yearly, the third most deadly disease in the country.

An issue came out in late 2019 when some individuals or groups questioned why PCV procurement — a total of P4.9 billion for 2020 — specified only a single vaccine, PCV13.

I got curious about the difference between the two vaccines, I made my own brief research and I found these four studies and report (see Table 1). 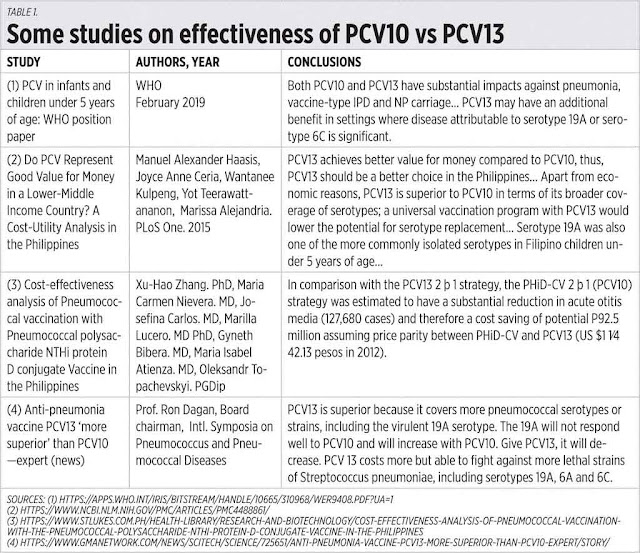 So from a technical and medical perspective, PCV13 is superior. From a financial and fiscal cost, PCV13 is more costly by about 10%. An estimate of the fiscal cost if universal vaccination is done nationwide was made in 2015, the only study I have encountered so far (see Table 2). 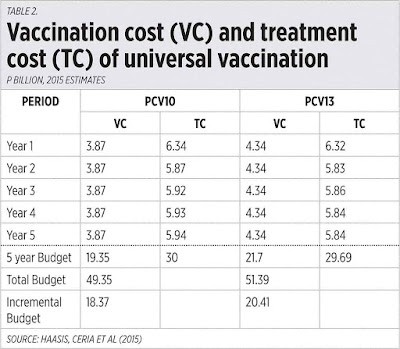 From this 2015 study, it comes to a difference of P2 billion over five years, or P400 million/year for vaccines of PCV13. Updated to 2020 costs this comes to about P500 million/year — but PCV13 will protect thousands or millions of children from more virulent diseases. The DoH should be guided more by thousands of children’s lives that will be saved, than the extra cost of half a billion pesos that it can save.
----------------