The enhanced community quarantine (ECQ) which the government hoisted over the entire Luzon has resulted in large-scale business and economic losses. The overall impact on the 1st quarter GDP will be known in about two months from now, but the decline in electricity demand is known daily.

I got weekly data for March 2020 from the Independent Electricity Market Operator Philippines (IEMOP), and also the data for March 2019, and I computed the difference between the two periods. There was a big decline in power demand starting March 15, the day the Metro Manila quarantine was implemented, followed by ECQ for the entire Luzon on March 17. Big declines in average demand of 5.5% and peak demand of 8%. The customer effective spot settlement price (ESSP) at the Wholesale Electricity Spot Market (WESM) was down by 60% to only P2.08/kWh (see Table 1). 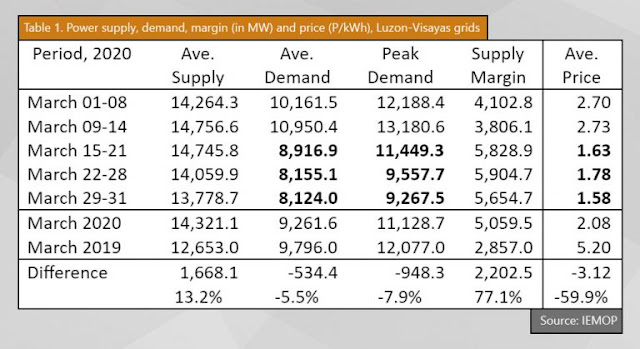 This means big savings for residential customers and the few commercial and industrial customers that are allowed to continue operation. It also means big losses for both generation companies (gencos) and distribution utilities (DUs) like Meralco in terms of decline in revenues. I assumed a 5% decline in megawatt hours (MWH) for March 2020. My estimated losses for gencos in the Meralco franchise area alone is about P934 billion and for Meralco itself, about P33 billion (see Table 2).

Now the Laban Konsyumer Inc. (LKI), headed by my new friend Vic Dimagiba, sent me its letter to the Philippine Independent Power Producers Association, Inc. (PIPPA) dated March 26. LKI is asking the private independent gencos to accept a Force Majeure provision of their Power Supply Agreements (PSAs) with DUs and electric cooperatives because electricity consumers in Luzon should be spared from paying fixed charges for generation capacity that was not consumed, that GenCos will have windfall profits for “ghost” deliveries.

My understanding of this letter is that LKI wants the contract price under PSAs, say P4/kWh, to be forced to go down to the WESM level of P2.08/kWh for March 2020. Otherwise they will demonize and lambast the gencos as greedy.

This is an irrational demand by LKI on the following grounds.

One, a PSA contract price is an important incentive for companies to stay, even expand in the power generation business. Otherwise they might consider going into hotels, restaurants, hospitals, and other businesses and leave the country’s power supply situation further in peril.

Two, it is selective as it targets only the power supply sector for some parochial interests. LKI did not write similar petitions to water companies, telecom and internet companies, food manufacturers, trucking and logistics companies, etc. It did not say that they should bring down their prices in this period, otherwise LKI will demonize and lambast them as greedy.

Three, customers are charged on their actual electricity consumption, not on electricity produced that was not consumed. The claim of “windfall profits for ghost deliveries” is an illusion.

Four, as shown in Table 2, the gencos, and even DUs like Meralco, have already suffered big revenue losses of nearly P1 billion for this March alone.

Five, I am not a lawyer but I think the Force Majeure provision mainly applies to “Acts of God” and not Acts of Government. The ECQ is an economic and business punishment imposed by the government in exchange for the public health goal of “flattening the curve” of the China virus infection, a.k.a. COVID-19.


The Department of Energy and the Energy Regulatory Commission, among the entities cc’d by LKI, should not entertain this irrational letter from LKI. People should learn to respect business contracts, wait for voluntary waivers or price reductions but not forced waivers and price controls.
---------------