Japan is not a hard lockdown country but it still experienced a contraction of -2% because it was already contracting in the previous quarter with -0.7%. Japan is now technically in an economic recession.

The most adversely affected countries in Asia are China and the Philippines. From high growth of 6%+ in Q4 2019, they just went negative the next quarter.

The Department of Finance (DoF) showed sensitivity to the plight of many losing businesses. It has tweaked the CITIRA (Corporate Income Tax and Incentives Reform Act) bill, changed it to CREATE (Corporate Recovery and Tax Incentives for Enterprises Act) bill with the following tax adjustments, among others: corporate income tax (CIT) cut from 30% to 25% by July this year; applicability of net operating loss carry over (NOLCO) extended from the current three years to five years; the 5% gross income earned (GIE) transition has been prolonged from two to seven years to four to nine years.

These are perhaps the deepest tax cuts the Philippines ever experienced. Bravo, DoF.

Now some sectors want to push very parochial interests and want to penalize Philippine businesses with more expensive energy which will be passed on to consumers.

HB 2184 or the “Low carbon economy bill,” authored by Deputy Speaker and Antique Representative Loren Legarda, plans to penalize fossil fuel energy and establish the emission Cap-and-Trade System in the industry and commercial sectors to reduce greenhouse gas emissions. The bill was discussed in a public hearing by the House Committee on Climate Change on Feb. 26.

A quick survey of GDP size and coal consumption would show that this bill is very parochial and anti-business. The Philippines’s coal use in 2018 was only 16.3 million tons oil equivalent (mtoe), among the lowest in Asia. The world’s four biggest economies are also among the world’s biggest consumers of coal energy (see the table). 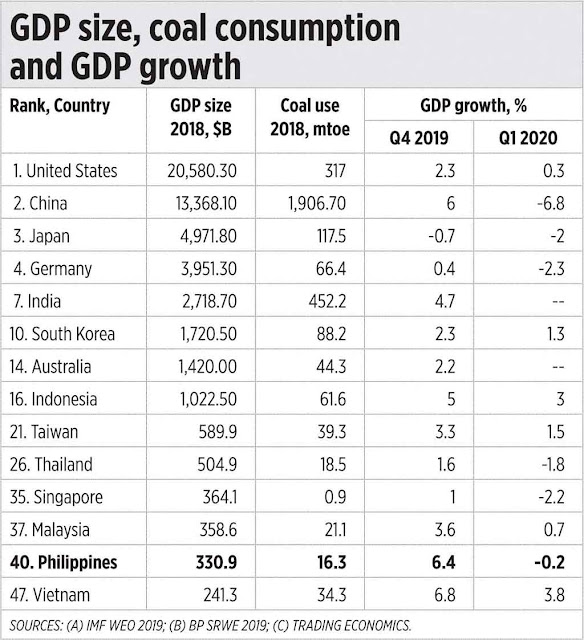 So this low carbon bill would want even more expensive electricity, a more unstable power supply, and more potential blackouts because it will restrict the already small fossil fuel capacity in the country. The lobbyists want more subsidies and mandates, direct and indirect, to variable renewables that by nature are intermittent and weather dependent. Adding batteries to solve intermittency problems would add extra costs to power. And even so, there are days and weeks that are cloudy and non-windy so there is little or no solar and wind power produced to store in batteries.

Congress, the DoE and the public should ignore parochial and self-serving interests to further penalize the Philippine economy, instead of jump starting it after the downturn caused by the COVID-19 pandemic. Expensive energy to “save the planet” — from whom and from what? From Al Gore and the UN, from less rain and more rain, less floods and more floods, less storms and more storms?

Posted by Bienvenido Oplas Jr at 12:04 AM