Among my favorite, most memorable shirts, below. (1) pilipinasforum@yahoogroups.com, "where immortals argue", we formed in 1999, verrry active political and economic discourses. It helped me focus my advocacy towards Minimal Government, a small political movement we formed in 2004. I was granted an Atlas International Fellowship that year, I attended the Mackinac Leadership conf in Michigan, the Atlas liberty conf 2004 in Chicago, among others.

Then the 2009 Atlas commemoration of the 20th anniversary, fall of the Berlin Wall (Nov. 1989) held in Washington DC. It was also my last Atlas-sponsored conf abroad. 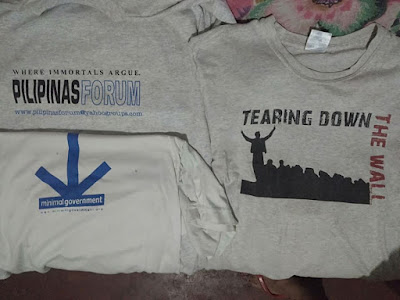 Thanks again to Jo Kwong, former Atlas VP for Institute Relations, for her support and belief in me, she sought funding for my travels in Atlas liberty forum 2008 in Atlanta, Liberty Forum in March 2009 in LA, then Nov. 2009 in DC, Tearing down the wall conf. Jo resigned in end02009 I think, and Atlas has stopped sponsoring me after that, 11 years now.

But it was ok with me. I am happy that other friends see my contribution to free market movement until now, 16 years since 2004 -- ATR, PRA, IPN, FNF, Heartland, Geneva Network, etc. FNF and PRA especially. Thank you, friends.

Last July 2019, I went back to Washington DC to attend the Heartland 13th ICCC. After the conference I visited some friends, including Jo Kwong. I was very happy to see her again since 2009. She picked me up from a Metro station and brought me to her house in old Alexandria, VA. I also have beer with her hubby.