I just found this, my guest article in Manila Times nearly 10 years ago, reposting.
Below it is part of the one-page statement by various organizations on price control that will be implemented tomorrow. It was posted by PHAP in the DOH Advisory Council members (about 75 names and email ads), me included.


The drug price control or price regulation policy will turn exactly 1-year-old on August 15, 2010. A year after its implementation began, has the policy achieved its goal of making essential, popular and branded drugs become more accessible to the poor?

To help us answer this question, let us see some sales data from two drugstore chains, MedExpress/Manson drugstores and Watsons, which, starting this year, has become the second biggest drugstore chain in the country. The officials of these stores gave me permission to use their data for this article.

MedExpress’ sales data for the price-controlled drugs showed the following: From August to December 2009 vs. same months in 2008, sales volume fell by 3.4 percent and sales value tumbled 34.3 percent. From January to May 2010 vs. same months in 2009, sales volume has managed a 7.3-percent increase but the value plummeted by 65.4 percent, whacking the retailers’ margins.

It is time to move on, abandon politicized pricing of certain drugs, and focus our energy on the bigger issue of healthcare coverage for many Filipinos. 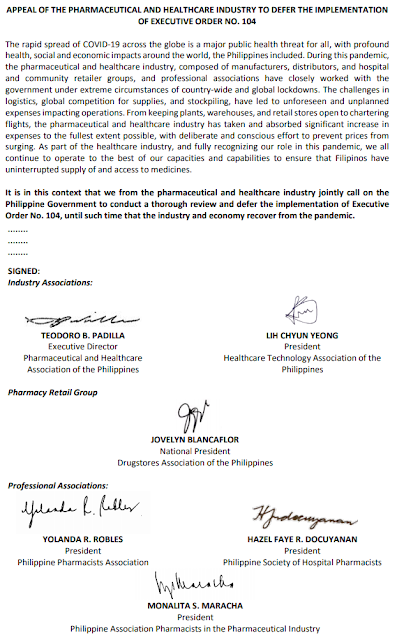