The adverse impact of prolonged community quarantine (CQ) in Metro Manila and the rest of Luzon since mid-March is shown by the huge decline in electricity consumption. From the Independent Electricity Market Operator Philippines (IEMOP) data for Luzon-Visayas grids, I compared the April-May 2020 data to the same months in 2019 and the result is really bad.

Meanwhile, the country’s biggest energy company, Meralco, has been attacked recently based on half-truths with three or more agenda: refund consumers due to “overcharging,” push for free electricity up to 200 kwh, and kill coal and mandate more wind-solar energy. The sporadic attacks as reported in other newspapers came from the Power for People Coalition (P4P)/Gerry Arances, Bayan Muna leaders Neri Colmenares and Congressman Carlos Zarate, and Tony la Vina.

Let us check the facts to see if these claims and agenda hold water or thin air.

First, Meralco “overcharging” in May 2020 billings due to averaging of December-February electricity consumption for the March-April billings, “least favorable to customers because December usage is usually higher than normal” so the average is inflated.

Meralco’s mistake is not overcharging but that they used the consumption in the coldest months as the reference period for March-April billings, which created a moral hazard problem — consumers consumed more electricity since they would just pay the low kWh average for the cold months. Then the ECQ was extended to May, and the moral hazard problem was extended by another month, and when the actual meter reading was made, mid-May minus mid-February, the actual electricity consumption in kwh was big, and this created the surprise and conspiracy theory of “over-charging.”

Second, that Meralco should “waive the electricity bills of customers consuming an average of 200 kwh or less… and the first 200 kwh of households who consume 200 to 500 kwh.” To cover generation, transmission, distribution and other charges.

This is socialistic and parasitic thinking. Power plants do not get free fuel, free labor, free interest payment for their loans, etc. The same for the grid/system operator, the distribution utilities (DUs), and electric cooperatives (ECs). It is very unlikely that Bayan Muna would demand this kind of irrational electricity freebies from all other DUs and ECs in the country, they just target the biggest and richest DU for media mileage and other political interests.

Third, Meralco has a “preference for dirty energy from coal and fossil fuels” when “coal power causes sickness and makes people sick” so the solution is more renewables like biomass, solar and wind (BSW) plus a silent endorsement for natural gas.

Again, this is not so. Among the richest and most developed economies in the world with healthier people who have a high life expectancy are the major coal consumers — the US, Germany, Japan, Taiwan, Australia, South. Korea, Malaysia, etc. Coal consumption in million tons oil equivalent (mtoe) is divided by population to derive the kilos of oil equivalent (koe) per capita (see the table). 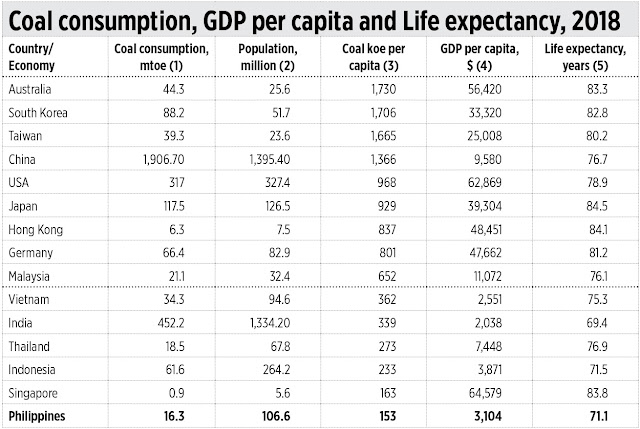 The Philippines’ coal consumption of only 153 koe per person in 2018 is the smallest, the lowest among developed and emerging East Asian countries and yet certain lobbyists of renewables want to further restrict coal power development in the country. DUs like Meralco and ECs should get more coal power contracts, not less.

Fourth, variable renewables like BSW are cheap and abundant enough to replace coal power. Far out. In 2019, the BSW plants reached 1.7 gigawatts (GW) or 6.7% of total installed capacity of 25.5 GW. But BSW’s actual electricity generation was only 3.3 terawatt hours (TWH) or 3.1% of total power generation of 106 TWH. In contrast, coal power constituted 41% of total capacity but produced 55% of total electricity consumption in the country.