Jayant Bhandari on the recent US riots

I am reposting some recent fb postings by an Indian-Canadian friend, Jayant Bhandari. I don't agree with everything he says but he's frank and clear, I like it. So here goes...

It is much easier to clean a swamp of crooks who know they are crooks but cleaning an ideological swamp of indoctrinated, politically correct, virtue-signaling people is not easy. Trump has certainly exposed how deep and wide the swamp is, but he cannot drain it.

I think as long as there is a democracy it is impossible to drain the swamp. The institutions must reflect the character of those who vote. Under the current form of democracy, it is the bottom 50% (plus 1) who decide. Populists get to the top, for that is what the psychology of the bottom 50% enables. Then the elected truly believe in what started as populism. After 3 generations, the way of thinking enabled by universal suffrage is set in concrete.

We should progress towards no government. And all efforts should be to minimise the size. Whosoever runs should be of merit.

I think the only thing that can help without burning the whole place down is to restrict democracy to 6% of the population. I know doing this sounds impossible, but no more impossible than burning down Harvard. Restrict to landowners, tax payers, men, above 35 years of age with a productive life, etc. This is what the US was like in 1780.

(US getting for another civil war) I think it is inevitable. This not because there are crazy people in the society, but because their craziness has been rationalized by the larger society, and the institutions are morally incompetent to put the crazies on a leash.

This is Minneapolis Sheraton after it passed through the hand of the rioters. This is what leftists do. They reduce everything to medieval existence. They have a natural pull towards subsistence, wretched, Malthusian existence. 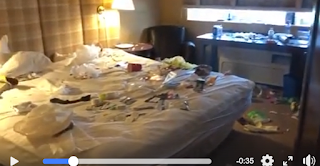 Leftism is a product of low-IQ. Leftists have no goals and no values. They throw stones and destroy monuments. They don't understand production. They are feral. They have only animal instincts.
--------------

This is truly sad that politically indoctrination has corrupted the passions of so many Americans. They have become do-gooders, with their emotions unconstrained by reason. They have bought into the leftist narrative. Secretary of Defence and Chairman of Armed forces have gone against Trump, again, mostly because they genuinely believe in it. The rot in the US institutions is far too deep and wide for Trump to change the course of its future. I wonder how different these Guardsmen are from what the kids during Mao’s Cultural Revolution were.

‘What I saw was just absolutely wrong’: National Guardsmen struggle with their role in controlling protests
https://www.politico.com/news/2020/06/09/national-guard-protests-309932

The Left is parasitical. It is anti-civilization, regressive and feral. Unchecked, it eats away the innards of any society. Universal suffrage was an unmitigated disaster for the West.

Police unions under fire from left as calls for reform ring out in aftermath of Floyd death
https://www.foxnews.com/politics/police-unions-george-floyd-aftermath

Rioters are always a tiny minority. 1% of society? Behind them are the vast majority who give their acquiescence. The biggest culprit is the tiny minority that has the responsibility to be asking to shoot the arsonists. This minority is missing, made impotent by political correctness, and comfortable life that they don't want to put at risk.

NYC mayor's daughter was arrested in NYC. I wonder how a mayor could let her daughter go out late at night when the city was burning. Theirs has to be a family of true-believers and do-gooders. And they must be an extra-ordinarily pervert. Look at the rings on the face. Perhaps, this is a mature stage of democracy, which throws out very pervert go-gooders as leaders. Look at Modi, Trudeau, etc. I wonder how their minds are structured.

Rule of thumb: When the US is not watching, the rest of the world starts to fall apart. China has a history of being non-aggressive. And why was India caught sleeping during Kargil? And why again now? Indian local-language media is going crazy talking about how much better the Indian army is compared to the Chinese. In 1962, the Chinese and the Indian GDP were similar. Now the Chinese GDP is 5x that of the Indian. And, contrary to the Indian media, the Chinese army is far better equipped and trained.

Posted by Bienvenido Oplas Jr at 3:07 AM