Some questions on Executive Order No. 104 (EO 104) — the new drug price control via the imposition of a maximum wholesale price (MWP) and a maximum retail price (MRP) which was issued on Feb. 17, to be implemented on June 2:

1. Is price control being imposed on the most prescribed innovator medicines in the hopes that the products will be pulled out, to make the less-prescribed medicines make money? Is the Department of Health (DoH) advancing pharma and health cronyism?

2. EO 104’s four criteria are subjective while RA 9502 (Cheaper and Quality Medicines Act of 2008) and its Implementing Rules and Regulations (IRR) have objective, legislated criteria, so why were all of these ignored?

3. From 2014-2019, only nine of 166 new molecules or modern medicines that were launched in developed economies were launched in the Philippines, and this after two years’ delay. What is the DoH explanation for this?

4. When the anti-COVID-19 medicines and vaccines are finally available abroad, they may not be made available in the Philippines because the price control penalizes and demonizes successful medicines — is this the DoH goal?

These are the questions I raised during the DoH Advisory Council’s virtual meeting last Tuesday, May 26.

Questions Nos. 3 and 4 were not answered by the health department.

EO 104 will cover 133 drug preparations, expandable to 205. Surprisingly, some medicines have an anomalous situation where the projected retail margin is big but price reduction to consumers is zero or almost zero. Consider these 17 drugs (see the Table). 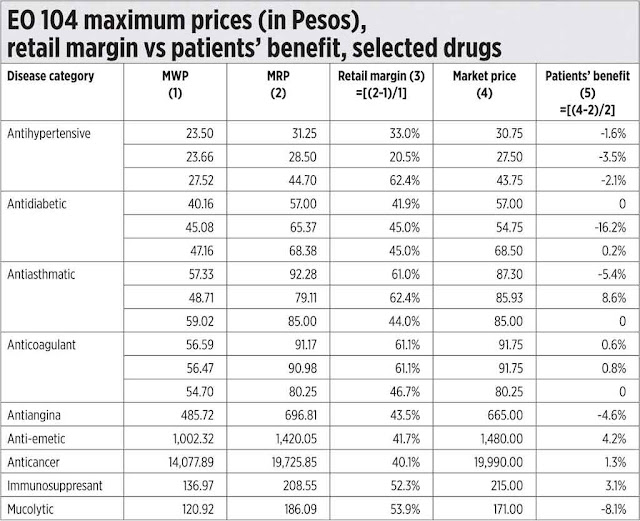 So EO 104 will have winners and losers. The favored winners will be: 1.) non-innovator manufacturers as their less-prescribed drugs will become more-prescribed if the successful innovator drugs (or companies themselves) pull out; 2.) retailers and drugstores, thanks to higher margins on certain products; 3.) Health Secretary Francisco Duque and some legislators like Senator Bong Go who will claim political credit for political intervention in pricing.

The penalized and losers will be: 1.) innovator manufacturers, since the law will force them to sell at low profit or at a loss, and they may consider pulling out their successful drugs, if not the companies themselves; 2.) physicians, who will have fewer drug options for their patients if innovator drugs are pulled out; 3.) patients, especially when the drugs they particularly need become unavailable; and, 4.) the Department of Finance since tax revenues will decline when some products or companies pull out.

There are other distortions that EO 104 has created, like certain drugs which were procured months ago by hospital pharmacies and drugstores and projected to be sold out by June 1 but are still there due to the COVID-19 pandemic. Low demand for certain products bought at higher prices and which must be sold at lower, MRP levels. There are two options, extend the transition period and EO implementation beyond June 2, or reimburse the price difference between acquisition cost and MWP. This cropped up during the Advisory Council meeting last Tuesday.

Then I heard on the radio Vic Dimagiba of Laban Konsyumer Inc. (LKI) praising price dictatorship, saying that the innovators’ federation scenario of potential tax losses of P28 billion under price control is teasing and provoking the government.

Vic should see the table in this column — some or many LKI supporters and donors may be among the losers of the price dictatorship that he advocates. The Finance department should remove the VAT exemption of drugs procured by senior citizens to raise more revenues — after all, the seniors, rich and poor, already get a mandatory 20% discount.

I saw the statement by the Joint Foreign Chambers of the Philippines (JFC) dated May 19, “Recommendations for Facilitating Business Operations of Healthcare Companies Under the ‘New Normal’” that was sent to officials in the Executive and Legislative branches. In their five-pages position, they stated, “the JFC urges the Philippine government to rescind the implementation of Executive Order No. 104… Alternatively… Institutionalizing price negotiation based on sound review of medicine prices and economic viability of reduced prices of pharmaceutical products.”


Amen to this. Market mechanisms and not political coercion will produce non-distortionary outcomes and compromise among various stakeholders.
----------------