The Philippines has perhaps the most draconian, most hysterical lockdown policies in East Asia and even in other countries in the world. From mid-March to end-May, all public transportation — planes, buses (provincial and Metro Manila), jeepneys, regular taxis and TNVS, tricycles and motorcycle taxis — were disallowed. Taxis were allowed to operate starting June 1, the rest were still prohibited.

Three economic dysfunctions have occurred. One, our GDP contracted at -0.2% in the first quarter (Q1) of 2020, the second biggest drop in the region from Q4 2019 next to China. Two, our unemployment rate in April rose more than three times the January level, the second highest next to India in the whole of Asia. And, three, our stock market is -18% lower than it was a year ago, the second lowest to Indonesia. Even though our COVID-19 deaths per million population are among the lowest in the world (see the table). 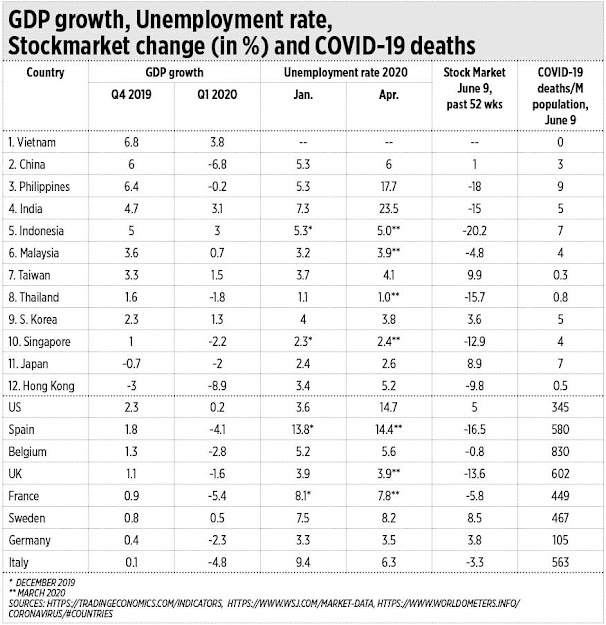 Other notable things and comments from the numbers shown in the table are as follows:

One, among the selected European countries, no-lockdown Sweden is the only one that did not experience a growth contraction in Q1 2020. It experienced a rise in unemployment but not as high as that in Spain, and has had growth in the stock market.

Two, hard lockdown US experienced modest growth in GDP and the stock market (DJIA) but it experienced a four-fold increase in its unemployment rate.

Three, no or light lockdown South Korea, Taiwan, and Japan have growth in their stock markets, also in GDP, except Japan which has had a contraction in growth even before the pandemic.

Four, the Philippines’ GDP was pulled down by low growth in household consumption (only 0.2% growth) while private investments contracted to -18.3%. The big challenge is to raise these two which constitute about 83% of GDP.

Six, the big decline in the Philippine stock market reflected not only the closure of many businesses starting mid-March, but also the deterioration in the investments climate. Two recent high-profile examples:

One is President Duterte’s unreasonable outburst against the two water concessionaires and the cancellation of their contract extension until 2037. Two is the non-renewal of ABS-CBN’s franchise, partly because of its issuance of Philippine Depositary Receipts (PDRs) to foreign investments, even while other media outlets like GMA have also issued PDRs and the issue was not taken against them.

I saw several documents with plans to jumpstart the Philippine economy. Many of these papers are good and proactive, except that there is nothing in them that admits the hard lockdown was wrong. Since it was not wrong, then the government can continue it today and tomorrow.

In particular, there is a big focus on the government’s Build, Build, Build (BBB) program. With so many restaurants and bars, hotels and shops, bus lines and other businesses already bankrupt or shutting down in the next few weeks and months, are the waiters and cooks to become construction workers? The bus drivers and plane pilots, are they to become backhoe drivers and crane operators? Are these easily doable? Likely not.

Then there is the mandatory social distancing which means that the cost of people mobility in public transportation — planes, boats, buses, vans, jeepneys — must further increase, or these public utilities will go bankrupt.