Rule of Law 29, Looting and burning are unrelated to BLM, race issues

Burning cars, shops, malls, have nothing to do with the killing of the Minneapolis policeman of George Floyd two weeks ago. Looting were done for the purpose of stealing 100%, zero relation with Floyd. The police officer and his buddies were already arrested and charged, publicized, that is rule of law. So all the looting and burning have zero justification, nada, zilch.

(All photos here I got from the web, various sources) 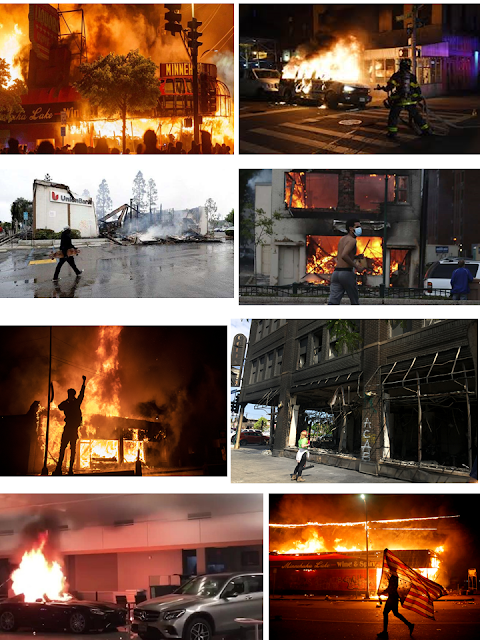 Big problem of the US, Europe. Criminal acts of looting, burning are now implicitly or explicitly justified, even glorified as righteous acts by many in media, NGOs, people themselves. They have accepted criminality as justified.

The armed citizens of America who came out openly with their guns as the protesters were passing by are correct in their action. Private property is private property. Not collective or communal or socialized property. Priv individuals are correct, justified, in protecting their cars and shops from criminal looters and arsonists.

Most US media especially the big ones like NYT, CNN, WaPo, are not likely to call these looters as criminals and thieves. They are not to blame for the stealing and burning that happened. For them there is one person to blame - Trump.

Todd Foster: It's been building for years as these run down, dysfunctional, Democrat inner cities excuses more and more anti-social behavior. Yes, broken doors policing may sound bad to us that may lean libertarian, but this is what you get when you start excusing bad behavior. You have two elements. You have Marxist whites using the protests as an excuse to destroy things. The welfare class blacks use the protests as an excuse to loot things. So you have department stores looted of everything and things like book stores burned to the ground. So like the Philippines, leftists are turning violent in America. It's just what low class people do when they're not civilized enough to live with the give and take of democracy. I do save plenty of blame for the enablers, including every moron protesting and taking knees in the name of a life long thug that met up with an incompetent cop.