This pandemic started with natural human fear of the unknown (Fotu). Then the socialists and authoritarians jumped in and expanded the hysteria. Socialists believe that many corporations, multimillionaires and billionaires are evil, so seeing many of them going bankrupt or poorer by the billions give them happiness.

Authoritarians hate individual freedom so closing all public parks, beaches, pools, malls, churches, etc.  give them happiness. Authoritarians by nature are hypocrites and always double talk. Take the BLM, Antifa rallies and protests in the US by tens of thousands, bonus of looting, stealing, burning. No social distance, hardly masks but ok with some city Mayors so long as public parks, churches, etc are closed to avoid crowd gathering together. 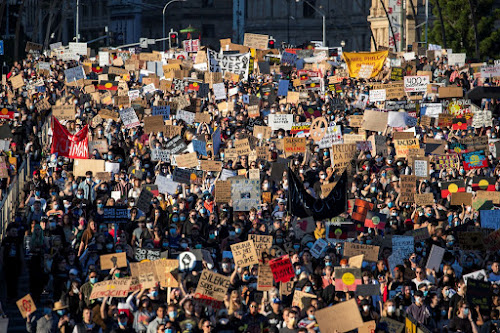 Socialists, explicit and implicit, are rejoicing that formerly huge corporations like airlines, hotel chains, fast food chains, are on massive financial bleeding and reduced to begging for state bail out money otherwise they will go bankrupt. This will weaken the corporate sector while strengthening the State and its powers. Money is no problem for the state because they can borrow or just print money by the billions and call it as QE or MMT or Econ Stimulus.

So from natural and spontaneous Fotu to deliberate, planned prolonged lockdown and massive restrictions on human mobility and entrepreneurship. The socialists and authoritarians, from politicians to NGOs, consultants and media, they are winning. A very successful political grab, simply by prolonging the hysteria and endlessly announcing and sharing 2nd wave, 3rd wave, nth wave. Keep scaring the public, forever if possible.

We should not call this as "new normal" or "better normal." This is abnormal. Thousands of consumers coming together benefit from huge bargains, Sales in malls and Dept stores. Thousands or millions of passengers benefit from budget airlines that pack people in tight seats but cheap air fares, also in mass transit like trains, and so on. But these are now prohibited or will soon be prohibited. Mass transit are cheap Bec people are packed tight. Beautiful resorts and parks in the provinces are seen by many people Bec of cheap airlines that pack people inside.

The consumers, passengers, entrepreneurs are the big losers of these abnormal policies and prohibitions. Invented by the socialists and authoritarians.

Similar to the city Mayors of Seattle, Minneapolis, NYC, DC, Chicago, LA, etc. Huge protest rallies, no social distance are ok. But churches and parks are not ok and should be closed.

(1) Tear Down this Plexiglass!
Tony with readersAnthony Gill   June 17, 2020
https://www.aier.org/article/tear-down-this-plexiglass/

I pray that masks are not the new normal. I implore our leaders to understand that the lack of trust in society is what prevents poor neighborhoods and cities from flourishing. Work to banish mistrust, not spread it further.

To paraphrase Ronald Reagan, who challenged Mikhail Gorbachev to eradicate another major symbol of fear and mistrust in the world, I urge us to tear down this plexiglass.

BLM Rallies Are Safe, Trump Rallies Are Not?
The starkest contradiction of all might be the reactions to President Trump’s rally planned for Saturday in Tulsa, Oklahoma. Local health officials are warning it could become a disastrous “super spreader” event—a term media outlets like The New York Times have been eager to repeat under headlines warning, “Trump’s rally in Tulsa Could Spread Virus,” using language they would never use to describe any of the large-scale protests, rallies, and riots nationwide…

Public officials in Tulsa have also adopted this double standard. The mayor and a cadre of other officials have publicly implored Trump not to go ahead with the rally, citing concerns about COVID-19. But these same officials dared not say a word against recent BLM rallies held in the city and suburbs, including a large one that got out of control and spilled onto a busy highway, where several protesters were injured.
------------------