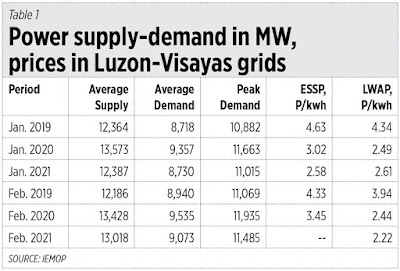 The indefinite lockdown policy of the government, turning exactly one year this coming March 15, remains the single biggest source of business uncertainties and economic contraction.

I checked the substitute bill and these three sections are highly suspicious:

“Sec. 38. Natural gas Share in the Philippine Energy Plan… required share of natural gas, in the form of a fuel mix, portfolio standard, and/or some other policy… be fully implemented.”

“Sec. 39. Off-take Support and Security… required to underpin investments in PDNGI shall be adopted.”

Three and a half years ago, this column (“Cronyism in Renewable energy, gas sectors?,” Sept. 7, 2017, https://www.bworldonline.com/cronyism-renewable-energy-gas-sectors/) wrote about the lecture in UPSE of FirstGen President and COO Giles Puno, where he lobbied for LNG — “1.) Holistic and defined energy mix, 2.) fiscal and non-fiscal policies, 3.) Secure LNG Off-take, similar to how Malampaya was underpinned.”

These three points are about the same as Sections 38, 39, and 40 of the Substitute bill — wow.

In a Viber interview with Lawrence Fernandez, Meralco Vice-President and Head of Utility Economics, he made an interesting observation that “Electricity consumers have been saddled for years by various subsidies and mandates to support (a.) renewable energy (RE) via Feed-in Tariff Allowance (FIT-All) and Renewable Portfolio Standards (RPS), b.) remote area electrification via Universal Charge Missionary Electrification (UCME), c.) off-grid RE development via RE Cash Incentive, and, d.) Malampaya gas via take-or-pay provision.”

These endless attacks to ease out or kill coal power in the Philippines and replace it with more intermittent RE and natgas which is also fossil fuel, are inconsistent with global energy realities. 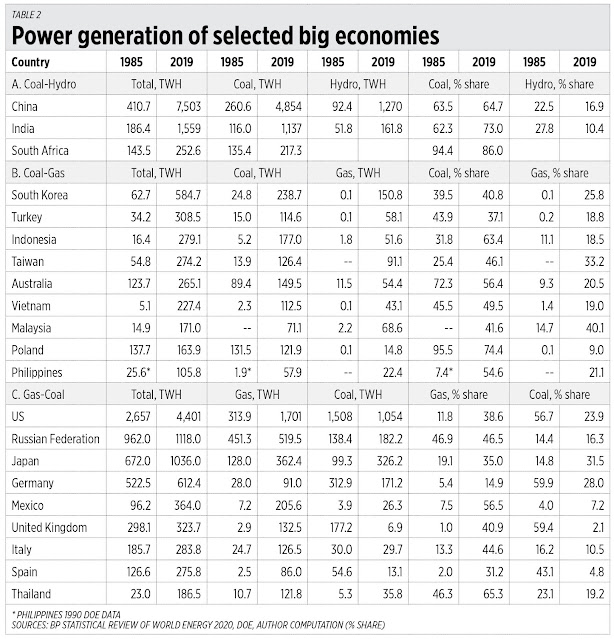 China, India and Indonesia, which constitute 48% or nearly half of the total world population, were 63%-73% coal-dependent in 2019. Among rich countries in 2019, Taiwan, South Korea and Australia were 41%-56% coal dependent. And the much richer US, Japan, and Germany were 24%-32% coal dependent.

If gas power is given priority or mandatory dispatch to the grid, there is little or zero incentive for the gas companies to bring down their prices and thus, ignore two important rules: the “least cost” mandate of distribution utilities (DUs) provision of the EPIRA law of 2001 (RA 9136), and Competitive Selection Process (CSP). The end result is more expensive electricity for consumers.

Posted by Bienvenido Oplas Jr at 11:35 AM