This morning when I opened my facebook, I received a notice from them: 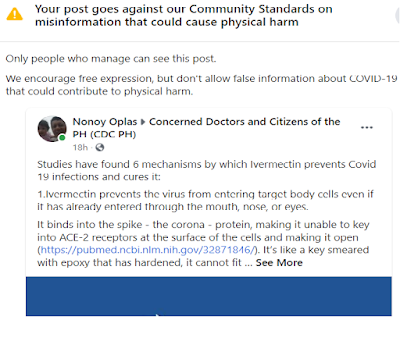 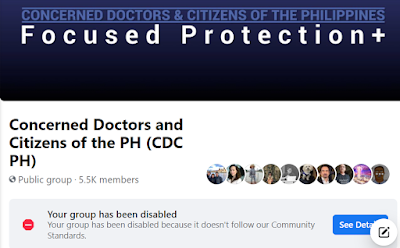 In my notification button, there was one notice from FB, I clicked it, 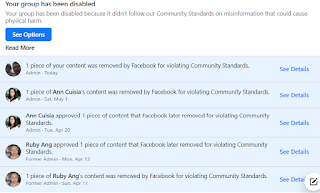 Here's what I posted that I got from a doctor friend which made fb angry or cite "against our community standards":
----------
Studies have found 6 mechanisms by which Ivermectin prevents Covid 19 infections and cures it:
1.Ivermectin prevents the virus from entering target body cells even if it has already entered through the mouth, nose, or eyes.
It binds into the spike - the corona - protein, making it unable to key into ACE-2 receptors at the surface of the cells and making it open (https://pubmed.ncbi.nlm.nih.gov/32871846/). It’s like a key smeared with epoxy that has hardened, it cannot fit into the keyhole anymore. This includes emerging strains with mutations on the spike protein that threaten to disable existing vaccines. Unlike the vaccines, this allows the immune system to develop antibodies – immunity - for each emerging variant spike protein encountered (https://www.who.int/news-room/feature-stories/detail/how-do-vaccines-work).
2.Even with the virus already inside the cells, Ivermectin prevents further entry to the cell nucleus to control it and shut down the immune response. This is why initially, patients don’t feel anything.
Ivermectin binds into Importin α/β1 heterodimer protein which the virus uses as the transport to enter the cell's control center - its nucleus (https://pubmed.ncbi.nlm.nih.gov/22417684/).
3.Ivermectin prevents the virus from replicating by inhibiting the Helicase enzyme it needs to do so. This is why Ivermectin may also be effective against some forms of cancer.
Ivermectin inhibits the Helicase enzyme necessary to initiate genomic transcription and eventually complete replication through protein translation (https://www.ncbi.nlm.nih.gov/pmc/articles/PMC5835698/)
4.Ivermectin prevents COVID-19-induced Cytokine Storm that triggers respiratory distress (ARDS) and attacks of immune cells on healthy organs resulting in organ damage, failure, and mortality.
A cytokine storm is the release of a large amount of pro-inflammatory signaling molecules called cytokines, causing multisystem organ failure and death. In SARS-COV-2, it also causes the leakage of fluids into the alveolar spaces in the lungs, blocking Oxygen intake. Ivermectin is an immuno-modulator that suppresses cytokine storms (https://pubmed.ncbi.nlm.nih.gov/19109745/)
5.A fatal effect of SARS-COV-2 infection is the blood becoming sticky and blocking blood vessels and Oxygen from being delivered to cells.
SARS-COV-2 infection uses the protein receptor CD147 in the membranes of red blood cells to make the blood sticky and cause blockage in blood vessels. Ivermectin alleviates CD147-mediated blood vessel blockage and blood clots (https://papers.ssrn.com/sol3/papers.cfm?abstract_id=3636557).
6.Ivermectin increases Interferon production and enhances its effects.
Interferons are like bullets fired by the body's immune system that destroy viruses like SARS-COV-2 upon entry. But when the viruses are so many that they overwhelm the body's immune system, the undestroyed viruses stick to the target cells and get in to use them to multiply and infect other cells. Increased Interferon production and enhancement in its effects were observed in Onchocerciasis patients administered with Ivermectin (https://pubmed.ncbi.nlm.nih.gov/7930742/)
Ivermectin prevents infection.
It shortens the period of viral shedding making one stop transmitting the virus sooner.
It is an effective anti-viral and an anti inflammatory drug.
Negating Ivermectin's capacities and not using it to save others is inhuman.
Pushing expensive drugs on the poor and needy is immoral.
Ask your conscience, "Am I doing what is right?"
Please pass on to all our doctors.
-------------
This afternoon, one CDC PH member, Mr. Mari Kaimo, wrote to fb:

"Three times now Facebook has shut down a group managed by the Concerned Doctors and Citizens of the Philippines in which we were freely and openly discussing the many possible medical and other solutions for the pandemic.
If Facebook truly does care for its subscribers, then it should DO THE RIGHT THING and HOLD A FACEBOOK LIVE DEBATE between the representatives of the Philippine Department of Health, the WHO and anyone else who Facebook has been taking orders from to suspend groups like ours or delete them completely. It is  time to bring these so-called "fact checkers" out of hiding so that we can all find out whether they are truly the experts that FB believes them to be.
It is time that we, as Facebook users, were given the right to confront our accusers and hold them to account for the lies they have been telling about us and our advocacy. If the science really is on their side, then they will win the debate handily. If, on the other hand, they have no facts or evidence to support their claims, then all of Facebook will see who it is who has been endangering people's lives all along. We at CDC Ph know for a fact that it is not us."
-------------
And FB has restored the group's page this afternoon. Thank you for listening, FB.
The original CDC PH page has 30k+ members and FB simply took it down. And the group started from scratch again sharing information, attracting followers. FB has bias against IVM and pro-vax, the main WHO, UN narrative. Many of my friends who posted articles, charts, graphs that show IVM safety and efficacy, they were suspended by FB. The social media has become a giant corporation that decides what information can be shared and cannot be shared. What narrative should be pushed, contrary opinions and data to be censored.
Posted by Bienvenido Oplas Jr at 6:42 PM