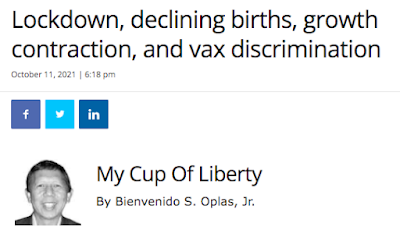 The Philippines’ lockdown is turning 19 months long this week. The “two weeks only” lockdown imposed on March 16, 2020 became two months, and is now approaching two years. One more proof that once government restrictions are created, they will hardly go away.

The mandatory social distancing, restriction on mobility, and prohibition of big parties have greatly affected the people’s health and social events like weddings. I checked the Philippine Statistics Authority (PSA) deaths and births data and the numbers are somewhat surprising.

This is not yet a “depopulation” situation but it can lead there over the long term if the trend continues.

Reviewing again the economic destruction caused by the strict indefinite lockdown in the Philippines, here are some numbers:

More government spending does not lead to more growth.

Until now there are still many economists and observers who argue that the solution to growth contraction is more government spending and borrowing. Far out. The cases of Italy, Spain, France, and the UK show that as they expanded borrowings in 2020, their GDP contraction worsened. Same trend follows for the Philippines and Thailand.

In contrast, some countries that limited their borrowings had either lower contractions or experienced growth in 2020. Examples are the US, China, Vietnam, and Indonesia (see Table 2). 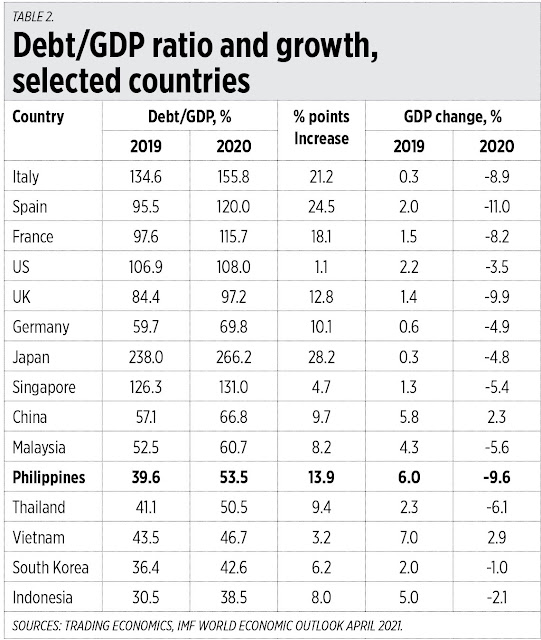 The government-imposed strict lockdown is the culprit, opening the economy with a minimum of health protocols is the solution.

Implicit mandatory vaccination via discrimination against those who do not have a vax card is now happening in some malls, enclosed restaurants and shops in Metro Manila and other big cities. This is a slippery slope, from an implicit vax mandate working slowly towards an explicit vax mandate via legislation someday.

There are two reasons why this move is wrong, anti-democratic, and anti-freedom.

One, this quote from a retired nurse in the US:

“Why do the ‘Protected’ need to be protected from the ‘Unprotected’ by forcing the Unprotected to use the protection that didn’t protect the Protected in the first place?”

Two, a government that imposes the discrimination by penalizing restaurants and shops that do not follow orders, does not discriminate in collecting taxes from the people. There is double talk by government, national or local, in this case. Similar to arguing that healthcare is a basic human right then saying that the unvaccinated should be denied healthcare.

About three months ago, I and some members of the Concerned Doctors and Citizens of the Philippines (CDC PH) met face to face with then Chairman of the Commission on Human Rights (CHR) Chito Gascon, and other Commissioners and officials of the CHR. While he supported mass vaccination, he recognized that it is a human right, an individual right, to choose not to be vaccinated for health, philosophical, and other reasons.

Chito was a friend since the 1980s in UP Diliman. He led a virtuous political life, from being a Chairman of the UP Student Council, to becoming a member of the Constitutional Commission of 1986, until his appointment as CHR Chairman in 2015.