I still believe that the mining industry is among the Philippines' biggest economic potentials. Just a small share of the total land area to be mined vertically downwards, create lots of jobs, earn lots of export revenues, government getting lots of taxes. The deep hole mined-out areas should be filled up and reforested under the existing mining law, but I believe it should be left as deep wide man-made lake. As water catchment during heavy rains and flood, reduce flash flood downstream, lake for tourism (take Caliraya Lake in Laguna, man-made lake with sail boats, expensive houses around it, etc), fishery hydro power generation. 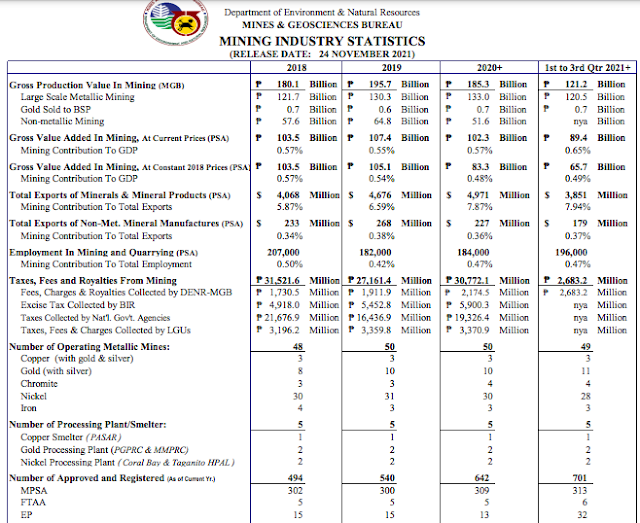 Meanwhile here are the most recent reports about the sector from BusinessWorld:

THE CHAMBER of Mines of the Philippines (CoMP) said it is not clear on whether mining policy implemented by the current government will enjoy any continuity in the succeeding administration in the absence of clear intentions expressed by the 2022 Presidential candidates.

On Dec. 23, the four-year ban on open-pit mining was lifted by Department of Environment and Natural Resources (DENR). Its Department Administrative Order (DAO) 2021-40 repeals the 2017 order issued by the late Environment Secretary Regina L. Lopez.

DAO 2017-10 banned open-pit mining, noting that “most of the mining disasters in the country were to due tailings spills associated with open-pit mining.”

In April, the government lifted the nine-year moratorium on granting new mining permits.

THE Department of Environment and Natural Resources (DENR) said it apprehended 14 illegal miners in Barangay Waan, Davao City on Dec. 11.

In a statement on Monday, the DENR said the operation was carried out by its Environmental Law Enforcement and Protection Service (ELEPS), which seized unlicensed equipment apart from arresting the persons engaged in unauthorized quarrying.

“The lifting of the open-pit ban does not… result in more illegal miners because their areas are separate from that of the large-scale miners,” Mines and Geosciences Bureau Director Wilfredo G. Moncano said.

THE Joint Foreign Chambers (JFC) of the Philippines said the government’s decision to rescind the ban on open-pit mining has been “a long time coming” and will encourage more investment.

“It’s been a long time coming and overdue. Metallic mining can be a major boost to the economy, particularly in rural areas in terms of employment and income,” Canadian Chamber of Commerce of the Philippines President Julian H. Payne said in a phone interview.