The new EO amends the one made by then-President Benigno S. Aquino III in 2012 which prohibited the grant of new mining deals in several protected areas, while awaiting the passage of a law that would increase the government’s share in mining revenues.

Republic Act No. 10963 or the Tax Reform for Acceleration and Inclusion (TRAIN) Act doubled the excise tax on minerals, mineral products and quarry resources to 4%, starting 2018.

“We are not paying attention to those calling for the EO to be withdrawn because the country is facing many problems. We need to find a source of funds and this is one path to recovery,” Environment Undersecretary Jonas R. Leones said in a Laging Handa briefing Monday.

Mr. Leones said there are 100 mining projects in the pipeline with the potential to generate P21 billion in revenue for the Treasury.

I think it's double, about $9B. Tampakan gold-copper mines (S. Cotabato) alone by SMI was originally $5.9B, King King (Davao del N) $2B and Silangan of Philex (Surigao del N) $2B. Tampakan was the single biggest FDI in the PH ever since, until LGU killed the proj upon the prodding of bright boys and girls anti-mining planet saviors mostly based in M.Manila.

Australia is a good model. Mining only 0.1% of land area yet mining output 9% of GDP. They export lots of metallic and non-metallic products.

Big legitimate money here, both corporate profit and government taxes. No need to steal. Metal prices can only go up or flatline over L-term, never go down because demand will keep rising but supply is restricted or killed by many planet saviors. Below, prices of gold, copper, silver, nickel today, way back last 5 years. 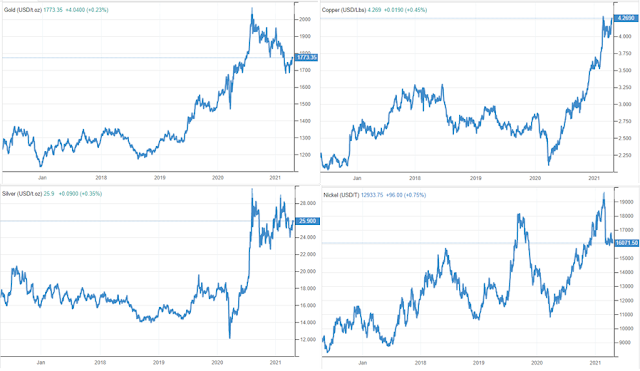