BWorld 481, Carbon tax is not good

Early this year, some sectors resumed their carbon tax-pushing agenda, proposing higher energy prices for many financially struggling companies and households while favoring intermittent renewable energy (RE) like solar-wind. These five reports in BusinessWorld capture this development:

5. “Diokno warns of risks associated with transition away from coal power” (March 27).

Good news in reports number 1, 3, and 5, the leadership of the Department of Energy (DoE) and the Department of Environment and Natural Resources said that the Philippines is not ready for, that it is not advisable to impose, a carbon tax. And the Bangko Sentral ng Pilipinas Governor warned about the “financial risks that may come with plans to move away from coal energy.” Thank you, Secretaries Alfonso Cusi and Roy Cimatu, and Governor Ben Diokno.

Reports number 2 and 4  were bad news, especially the one about adding 23 new solar projects and six new wind projects, on top of many big solar and wind projects that are already entitled to high feed-in tariff (FiT) or guaranteed prices for 20 years. Then there is the National Renewable Energy Program (NREP) plan to push hard the renewable portfolio standards (RPS) by raising the RE quota from 1% to at least 2.5% per year, so that they will reach the target RE share of 37.3% of the total power mix by 2030, and 55.8% by 2040.

Solar and wind have the highest FiT rates. Until 2020, solar FiT was P10.12 to P11.28/kwh, and wind FiT was P8.59 to P9.90/kwh. Compare that with the recent winners of Meralco’s competitive selection process (CSP): three coal and gas plants at only P4-5/kwh. And if a battery is added plus standby gensets running on diesel or bunker fuel, the cost of solar and wind can jump to the ceiling.

Among the carbon tax pushers is the World Bank (WB). In its recent report “Uneven Recovery” (April 2021), among the proposals are “Going green without hurting growth or the poor… Policy options include: (i) phasing out fossil fuel and energy subsidies, (ii) adjusting carbon prices…” Lousy proposals.

If we look at how many countries have industrialized and modernized, among the important reasons is that they have used cheap, stable, reliable, fossil fuel energy.

I computed the average electricity generation from 1985 (earliest comparative data available) to 2000, then from 2001-2019 of 20 countries and compared them with their average GDP growth over the same period. Power data came from the BP Statistical Review of World Energy (BP-SRWE) 2020 and the DoE, while the GDP data came from the IMF World Economic Outlook (WEO) database 2020.

With few exceptions, countries that have retained a high coal share to total power generation — at least 30% — have also experienced fast growth: China, India, South Korea, Turkey, Poland, and Taiwan. And countries that significantly raised their coal share in 2001-2019 compared with their share from 1985 to 2000 also experienced fast growth: Indonesia, Malaysia, Vietnam, the Philippines.

Countries that reduced their coal share in 2001-2019 experienced slower growth — the US, Canada, Australia, Germany, the UK, Italy, and Spain. Countries in Table 1 are ranked based on their total generation in 2001-2019. 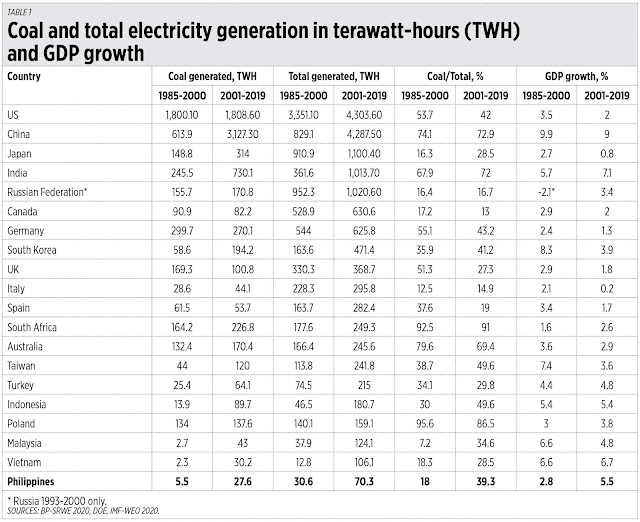 Meanwhile, power supply and demand data in the Luzon and Visayas grids show that in the first quarter (Q1) 2021 there has been a contraction or flat growth, while prices — both the customer effective spot settlement price (ESSP) and load-weighted average price (LWAP) — show continued depressed levels. Data for Table 2 comes from the Independent Electricity Market Operator of the Philippine. 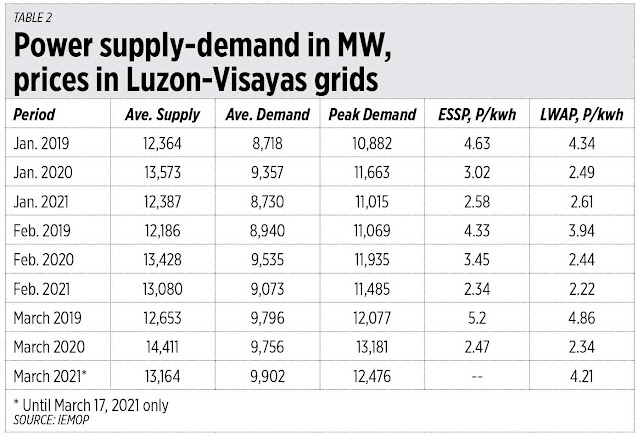 With the imposition of a curfew then a stricter quarantine in late March, this modest growth may turn out to be another contraction.

Environmental protection can continue by directing attention at old industrial plants that pollute, but their ECCs were grandfathered from the 1950s and 1970s — they do not have to meet modern emissions standards. And they should look into polluting jeepneys, buses, and many government trucks.

Economic recovery, fast and sustained growth, requires cheap, stable, and predictable energy. If the Philippines will stop building new coal plants while China, India, the US, Australia, South Korea, Indonesia, etc. keep building new and bigger ones, the dreaded emission impact is the same but we will deny ourselves the opportunity of additional affordable and stable power.
---------------

Posted by Bienvenido Oplas Jr at 8:13 AM