The PH econ contraction of the mid-80s, Marcos govt, and UPSE batch 1984

It is campaign period and the son of former President Ferdinand "Macoy" Marcos, Bongbong Marcos (BBM) is running for President in the coming May 2022 elections. Marcos was PH President from 1965 to 1985, 20 years. Martial Law and civilian-military dictatorship was 1972-83, ML officially "lifted" in 1983 but many political restrictions still in place.

Many supporters of the Marcos family spread the story that the economy was nice and humming during the Marcos period. Hmmm... fake news, beehhh. See for instance the numbers in GDP growth. 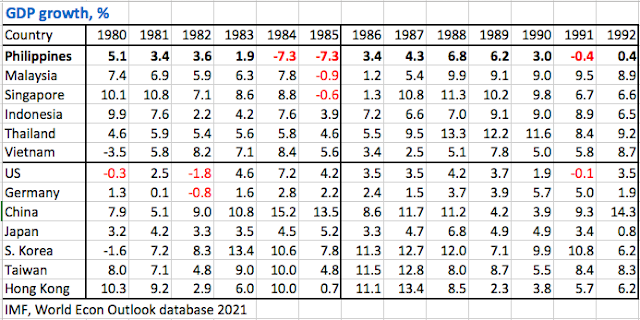 Yesterday, a friend and batchmate at the UP School of Economics (UPSE) posted this reminder from two officials of the Cory government then. 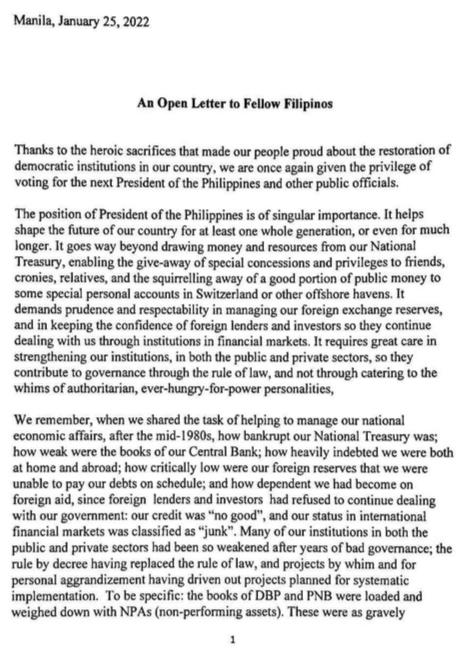 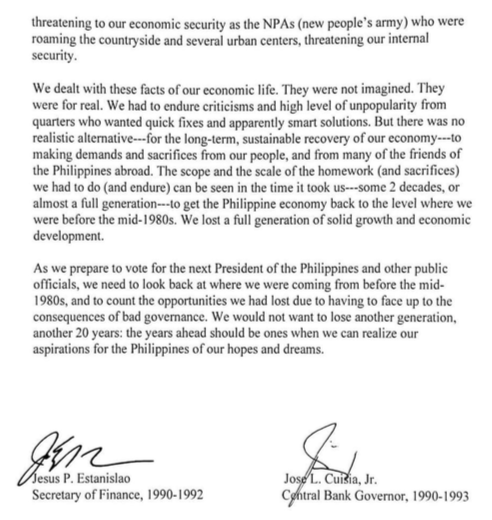 It was a mixture of nature-made and man-made catastrophe. Nature, the EQ and volcano eruption. Man-made, the killing of Bataan nuke plant in 1986 with zero alternative, hence the daily Earth Hours, up to 12 hours a day in 1990-91. The militarist coups of 87-89 were hang-over of the rule of guns and decree, not rule of law, that Gringo Honasan and his buddies at the PMA, their political backers, have gotten used to. Shame on them.

Our generation in UP was a melting pot. 1983 murder of Ninoy Aquino, lots of rallies in UP and outside UP in 1983-85 that I joined as I belonged to two organizations, UP ETC (Economics Towards Consciousness) and UP Sapul (Samahan sa Agham Pampulitika). I also have many activist dormmates and friends when I was staying at Narra dormitory. 1984-85 was heavy finance and economic bleeding as described above by Sec. Estanislao and Gov. Cuisia. 1986 was the "rewarding" with Cory in power.

My UPSE Batch 84, hah, it is legendary.
Here, the batch 25th anniversary, Silver Jubilarians in 2009 UPSE reunion. Lots of good looking boys and girls after 25 years. I'm partially covered at the back, beside Ricky Ongkiko and Gene Mercado, aww.

Vice Chairman was Buddy Angeles. Pinoy na Pinoy, medyo maitim, always smiling and approachable. Christian and Buddy team was a hit. I think they have no opposition at UPSESC election.

The duo would occasionally, not regularly, led some UPSE students in joining anti Marcos rallies in UP and outside, ayos na yon.

Of these batchmates, I am particularly indebted to the kindness of Butch Arroyo -- an Econ. Professor at Johns Hopkins Univ. in Washington DC. We were not close in UP then, he belonged to UP Ecosoc (Economics Society) while I belonged to UP ETC. But Butch was a member of pilipinasforum@yahoogroups that I formed and co-moderated in the late 90s to mid-2000s, there were lots of long discussions and even frequent fireworks in debates so we got to know each other more.

When I went to the US a few times to attend various conference, when I would be in Washington DC, I asked Butch if he could host me few days so I can roam around without spending extra in a hotel. Three times I asked him (2004, 2009, 2017) and three times he said Yes. Really cool and good guy. Thanks mucho, Butch. My forever gratefulness.

When I went to Houston around 2010, post conference I was hosted by my former officemates, Glo and Ronald Villanueva, UPSE alumni too but younger batches. Christian Garcia and his wife, Mayette Cuisia-Garcia also of batch 84, visited me at the Villanueva residence. They also live in Houston but in another suburb, Christian was an executive officer at a big energy company. I was very happy that they visited me.

My friends in UP ETC, many of them in the US and Australia. Jim Villar (batch 84) and Joey Dayao (batch 85) hosted me for a day and night of tour and drinks after my conference in LA in 2009.

The last UPSE alumni reunion was 2019. I attended all school reunions for the past 10-15 years, great way to catch up with friends and former classmates decades ago. And since there were always lots of beer and alcohol at the reunion, I would gulp lots of these drinks while dancing at performance of live bands, I would not bring my car and would hitch a ride with Ricky Zialcita and he would drive me home in Makati, several times. Thanks, Ricky.

These ugly lockdowns of two years made happy wacky reunions impossible. The militarists, politicians and bureaucrats in charge of these lockdowns are perhaps fans of Marcos the dictator, ewww.
---------------