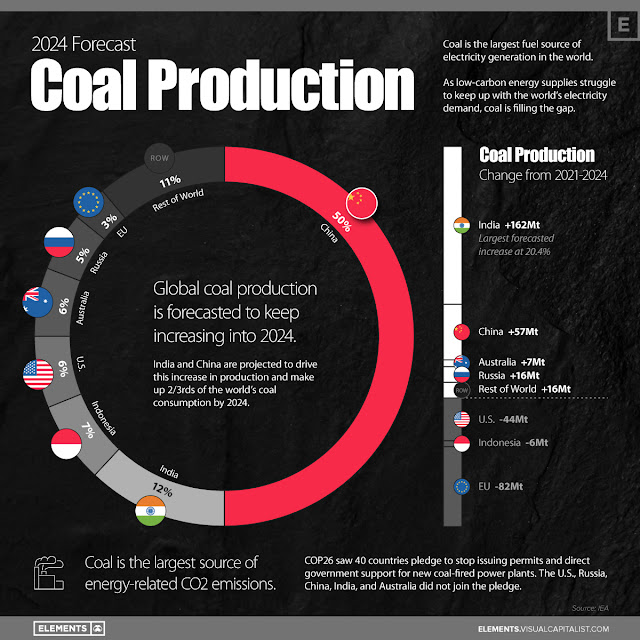 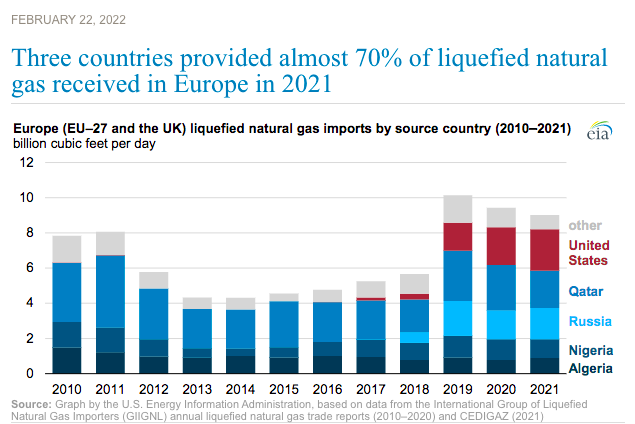 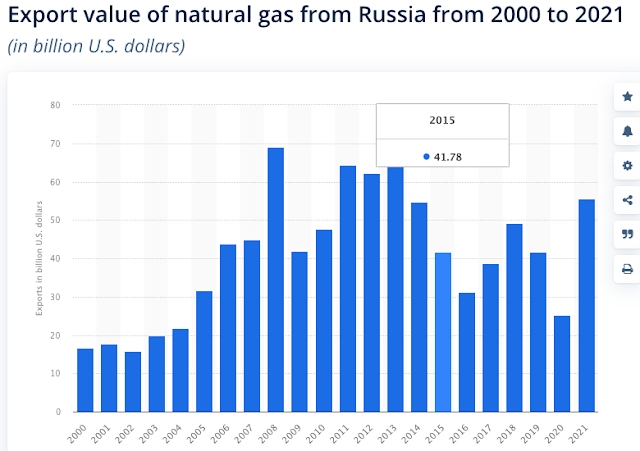 https://www.statista.com/statistics/1032435/russia-natural-gas-export-value/
5. Green Revolution? No Sanctions Planned for Russian Energy
Eric Worrall. February 25, 2022
https://wattsupwiththat.com/2022/02/25/green-revolution-no-sanctions-planned-for-russian-energy/
6. The Ukraine catastrophe and how we got here: Chronicle of a war foretold
I was there for the end of the Cold War — and we all understood how the new peace could collapse. We didn't stop it
By CHRIS HEDGES  FEBRUARY 26, 2022 12:00PM (EST)
https://www.salon.com/2022/02/26/the-ukraine-and-how-we-got-here-chronicle-of-a-foretold/
7. Shellenberger: Western Elites Are Putin's 'Useful Idiots'
BY TYLER DURDEN. SUNDAY, FEB 27, 2022 - 04:00 AM
https://www.zerohedge.com/geopolitical/shellenberger-western-elites-are-putins-useful-idiots
8. German Green Party Embraces Coal, LNG and Nuclear
Eric Worrall March 1, 2022
https://wattsupwiththat.com/2022/03/01/german-green-party-embraces-coal-lng-and-nuclear/
9. Russia's Most Important Export Partners
Martin Armstrong,  Mar 1, 2022
https://www.statista.com/chart/26948/biggest-export-partners-of-russia/
10. WB data on Russia trade partners
https://wits.worldbank.org/CountryProfile/en/Country/RUS/Year/2019/TradeFlow/Export#
11. Chaos Erupts In Energy Markets As European Gas Jumps 60%
BY TYLER DURDEN  WEDNESDAY, MAR 02, 2022 - 08:43 PM
https://www.zerohedge.com/commodities/chaos-erupts-energy-markets-european-gas-jumps-60
12. How Much Oil Does the US Import From Russia? Why Does the US Import Oil From Russia?
David Middleton March 3, 2022
https://wattsupwiththat.com/2022/03/03/how-much-oil-does-the-us-import-from-russia-why-does-the-us-import-oil-from-russia/
Meanwhile, here are some of my random notes early this month:
March 5:
1. Similarities bet Covid lockdowns + mass vax, and Russia-Ukraine war
1. Big pharma (US, UK, China,...) wanted a prolonged scare.
Big arms manufacturers (US, UK, France, Germany,...) want a prolonged war.
2. Big WHO, Big DOH and governments fan the prolonged scare.
Big Defense departments, Big NATO fan a prolonged war.
3. Big damage on economies by lockdowns, vax discrimination.
Big damage on economies by high oil gas coal prices, high inflation, economic sanctions.
4. Big media benefit from continued scare. From prolonged Covid to prolonged war.
5. NATO expansion via Ukraine membership right in Russia border is ok and not wrong. Russia invasion of Ukraine to prevent this from happening is not ok and wrong.
6. WHO and governments' incursion into individual rights to their own body and livelihood is ok and not wrong. Individuals opposing such incursion is not ok and wrong.
7. US-led economic and finance sanction of Russia is ok and not wrong. Governments' economic prohibition on the unvaxxed to work and move freely is ok and not wrong.
8. Big media are on the side of mainstream narrative. Putin and Russia are bullies, US and big NATO members are not bullies. Manda vax is not bullying, but the unvaxxed mixing with the vaxxed is dangerous bullying.
March 9:
2. On suspension of biofuels law in the PH
A good move by the DOE, https://www.bworldonline.com/energy-dept-floats-possible-suspension-of-biofuels-law/.
Corn should feed animals, not trucks and SUVs via biofuel in diesel. And people feed on chicken, pork products. Sugar should feed people, not cars via ethanol on gasoline. We like sugar in our coffee, ice cream, soda, sweetened drinks, etc.
Mandatory biofuels is among the ugly and insane policies to "save the planet" (from whom, from the UN and Al Gore? From what, from less rain and more rain, less cold and more cold?). And yes, suspend the coal tariff 7% on top of excise tax coal P150/ton. Advocates of e-cars say these vehicles help save the planet, but 80% of PH power generation comes from fossil fuels (coal, gas, oil plants). Instead of getting liquid fuel from the nearest gas station, they get electric fuel from coal plants in Pangasinan, Zambales, Bataan, or from gas plants in Batangas.
Meanwhile a dangerous plan by government, https://www.bworldonline.com/plan-to-declare-emergency-still-under-study-palace/.
One reason why oil prices were high even before the Ukraine war was high taxation of oil products. Excise tax alone, gasoline P10/liter, diesel P6/liter, LPG P3/kilo, coal P150/ton, etc. Then VAT, high oil prices means high VAT collections. Plus VAT applies also on excise tax, tax on a tax.
So if govt declares a "state of economic emergency", 100% it will be towards more govt intervention, like some oil price control, revive the ugly OPSF scheme, electricity price control, etc.
As famous US economist Thomas Sowell said it,
The first law of economics is to recognize scarcity.
The first law of politics is to ignore the first law of economics.
March 12:
3. On NATO expansion
Good article by former DOF Secretary Bobby de Ocampo, https://opinion.inquirer.net/150933/keynesian-apocalypse.
NATO is mainly to blame. When Gorbachev allowed the breakup of USSR, disbanded Warsaw Pact military alliance in 1991, NATO should have been disbanded too. But the US under Bush Sr dishonored the agreement with Gorbachev to stop expansion of NATO. By 2004, NATO was already on the doorstep of Russia border with Estonia and Latvia joining NATO.
The purpose of expansion is to have more expansion. By 2008, US already proposed to invite Ukraine to NATO. Ukraine is huge, biggest country in Europe after Russia, its and area is equivalent to Germany + UK combined.  NATO can install and hide as many missiles on its very long border with Russia. Missiles from Ukraine can easily reach Moscow in about 3 mins. In 2008, Sen Ron Paul already warned of the unnecessary provocation of such move.
Then in 2014 the US instigated a coup in Ukraine, pro-US/NATO leadership installed. In 2016 or 2015, Henry Kissinger and other US political luminaries already warned of the danger of such provocation. Negotiations until 2021 and Biden said Ukraine will be welcome to join NATO.
In 1991, Putin was a city bureaucrat at St. Petersburg and not yet a national figure while Bush Sr, then Clinton, then Bush Jr, etc were all eyeing NATO expansion towards Russia doorstep.
War is beautiful for the US military industrial complex. Just the past 2 decades alone, US bombs were in Afghanistan in 2001 and they stayed there for 20 years. In 2003 US bombs were in Iraq, the reason was based on 100% lie,that Saddam has WMDs, none. 19 yrs now and US is still in Iraq. Then US bombs also fell in Bosnia, Yugoslavia in the 2010s. More US bombs in Libya in 2011, US bombs in Syria in 2014, etc.
Good observation by Charlie Kirk last Feb 24, "They told us for 4 yrs that Trump will start a WW3 and there was none. Look at Biden with just 400 days in officec and war broke out."
Not defending the invasion of Ukraine but neither defending or praising NATO expansion.
Both are wrong and this war could have been avoided in the first place
-------------------