These are my thoughts and comments in my various chat groups, consolidating them... 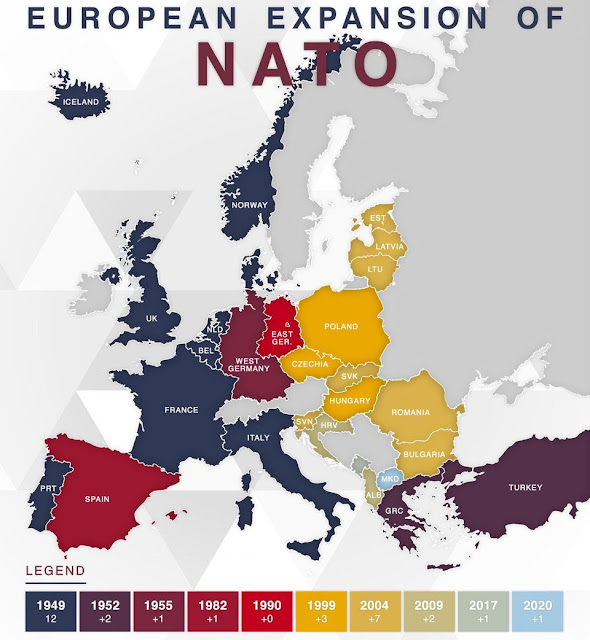 2. There is one way narrative. China expansion in SCS/WPS is wrong. NATO expansion in Europe is not wrong. PH, TW, ID, MY etc. shd be scared that CN expansion reaches their maritime waters. But Russia should not be scared that NATO members are right in front of them in the border. So Russia has zero justification to attack.

3. Ukraine should never join NATO, and US etc should never invite Ukraine to NATO. If NATO expands, right in front of Russia border, it's ok, not wrong. If Russia fights back the expansion, it's wrong.

4. Finland and Belarus should remain neutral -- neither NATO members nor Russia occupied -- have wide border share with Russia. Finland is rich, focus on trade and investment, not military alliances. It preferred to export Nokia and other goods to Russia than host NATO missiles in its soil. Why can't Ukraine do the same?

5. The purpose of expansion is to have more expansion. CN stole territories in the SCS precisely to steal more, especially atolls and islets currently claimed by other E Asia countries, expand EEZ claims from those atolls and huge rocks in the sea. So NATO expansion right at the border is meant to further expand towards Russia.

6. Russia is a bully, true.  But US is also a bully. They stayed in Afghanistan for 20 yrs when their stated goal was only to take out Taliban. They invaded Iraq 2003 based on 100% lie, that Saddam Hussein has WMD which did not exist. They helped bomb Bosnia, Belgrade, Yugoslavia etc around 2010s. They helped bomb Libya 2011, bombed Syria 2014, etc.

So most US and west propaganda are based on one sided painting who's the bully, that they are not bullies themselves. Which is a lie.

7. NATO kept expanding despite end of USSR and Warsaw Pact military alliance. Huge business in forever war policy because the US Germany UK Frame etc are huge arms manufacturers. Poor countries Estonia Latvia Georgia Ukraine being sucked into war war  thinking instead of focusing on more commerce. Now they can be cannon fodders in the US-Russia conflict.

8. ASEAN countries grew fast because they focused on trade and investment. Before, they have  NATO-like military alliance, South East Asia Treaty Organization (SEATO), formed in 1954 and disbanded in 1977. SEATO goal was to to counter communism in SEAsia. In 1975 communism won in VN, then Cambodia and Laos. But instead of strengthening SEATO, they abolished it in 1977. SEAsia said we focus on commerce, everyone agreed. So we have economic expansion via ASEAN, zero mil expansion via SEATO. ASEAN is a good model for small poor economies NATO members.

10.  Arms manufacturers -- from the US, UK, France, Germany, etc. -- are the big beneficiaries of the war. They are unhappy if there is no war. They were happy with Bush Jr, invaded Afghanistan and left after 20 yrs, invaded Iraq now 19 yrs there. Obama also went to new wars with US troops and bombs, Bosnia, Yugoslavia, Libya Syria,..  Trump they were unhappy as there was no new war. Under Biden, this is a big war, big money for them

To end this war, US and all NATO members should categorically and explicitly declare they will not invite or accept Ukraine. Also Georgia. And Belarus in case it decides to. And Russia should pull out all their forces out of Ukraine.

Ukraine and neighbors should focus on commerce, trade. Make money, not make wars.

Public discussion on Ukraine is all about confrontation. But do we know where we are going? In my life, I have seen four wars begun with great enthusiasm and public support, all of which we did not know how to end and from three of which we withdrew unilaterally. The test of policy is how it ends, not how it begins.

Far too often the Ukrainian issue is posed as a showdown: whether Ukraine joins the East or the West. But if Ukraine is to survive and thrive, it must not be either side’s outpost against the other — it should function as a bridge between them.

... 2. Ukraine should not join NATO, a position I took seven years ago, when it last came up.

... The test is not absolute satisfaction but balanced dissatisfaction. If some solution based on these or comparable elements is not achieved, the drift toward confrontation will accelerate. The time for that will come soon enough.

It All Comes Back to NATO
by ron paul monday february 28, 2022
http://www.ronpaulinstitute.org/archives/featured-articles/2022/february/28/it-all-comes-back-to-nato/

When the Bush Administration announced in 2008 that Ukraine and Georgia would be eligible for NATO membership, I knew it was a terrible idea. Nearly two decades after the end of both the Warsaw Pact and the Cold War, expanding NATO made no sense. NATO itself made no sense.

Explaining my “no” vote on a bill to endorse the expansion, I said at the time:

NATO is an organization whose purpose ended with the end of its Warsaw Pact adversary… This current round of NATO expansion is a political reward to governments in Georgia and Ukraine that came to power as a result of US-supported revolutions, the so-called Orange Revolution and Rose Revolution.

... NATO membership for Ukraine was a red line it was not willing to see crossed. As we find ourselves at risk of a terrible escalation, we should remind ourselves that it didn’t have to happen this way. There was no advantage to the United States to expand and threaten to expand NATO to Russia’s doorstep. There is no way to argue that we are any safer for it.

NATO itself was a huge mistake.

... I believe as strongly today as I did back in my 2008 House Floor speech that, “NATO should be disbanded, not expanded.” In the meantime, expansion should be off the table. The risks do not outweigh the benefits!

And a good point from my friend Alex E:

60 years after Dwight Eisenhower delivered his farewell speech warning about the military-industrial complex becoming a problem, it is this same military-industrial complex that has a built in economic and financial interest in the expansion of NATO. The original concept of NATO, as conceived by George Kennan the architect of post WW2 American foreign policy, was to contain the Soviet Union and the Warsaw Pact. When the Soviet Union collapsed in 1991 and members of the Warsaw Pact joined NATO in 2 tranches — including the Baltic states of Latvia, Estonia and Lithuana right next to the Russian border, Russia just accepted.   But when after the Bucharest NATO summit in 2008 still during the term of George W Bush declared that Ukraine and Georgia will become members of NATO, Russia strongly objected and drew the red line from there.

People think nothing could have been done to prevent Russia from invading Ukraine, but that's absurd: if Putin thought the costs of invasion outweighed the benefits, he wouldn't have done it. He's a rational actor not a madman. And today it's clear Putin calculated correctly.

After Russia invaded, a few people demanded that Europe stop buying its natural gas, but European utilities snatched up long-term Russian contracts, and the White House said, "Our sanctions are not designed to cause any disruption to the flow of energy from Russia to the world."

People who believe that nothing could have been done to prevent Russia from invading Ukraine thus imply that Russia's chokehold over European energy supplies was inevitable, but it wasn't. Europe could have easily increased, rather than closed, nuclear plants and natural gas

Britain could have increased fracking for nat gas but didn't. Why? Because Russia pumped $95M into anti-fracking advocacy. Noted the head of NATO, Russia “engaged actively with environmental organisations... to maintain Europe’s dependence on Russian gas” 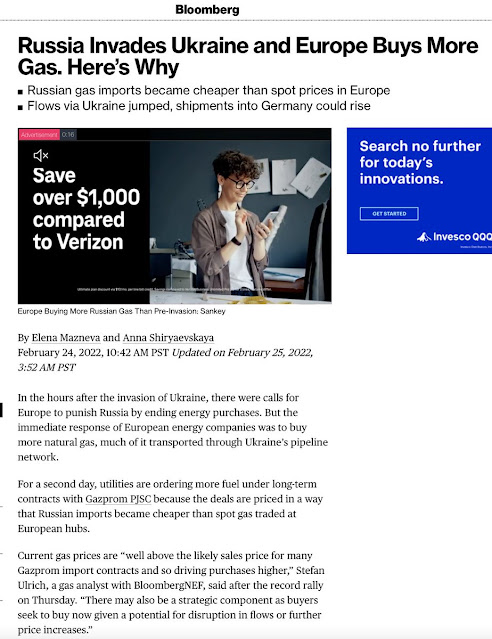 It looks like just after the sun set today the wind and sun together were generating less than 5 GW out of that supposed “capacity” of 125 GW.  Usage was about 50 GW at the time.  Oh, and Germany is also phasing out its nuclear reactors.  So aside from those tiny amounts of hydro and “biomass” at the bottom of the chart, that leaves coal, oil and natural gas; or alternatively, a blackout.  From Time, today:

Th[e] glaring omission in Biden’s sanctions package could be the consequence of a promise to the countries of Europe, cowering in fear as their dependency on Russian gas renders them impotent to fight back against Russia’s invasion. This is not unreasonable. Germany especially will suffer if Russian gas imports are blocked; Europe imports 40% of its natural gas from Russia, but for Germany it is up to 50%, on top of 45% dependency on Russian coal and 34% on Russian oil. Meanwhile, Germany is continuing to phase out nuclear, making it more reliant on Russian energy imports.