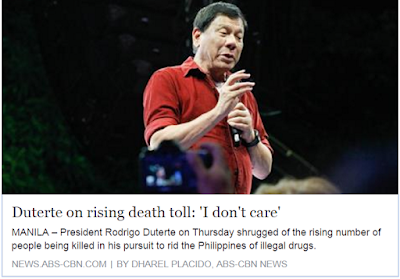 A friend in fb, Jasmin Romero of ABS-CBN posted the other day this report.

''I do not care. I really don’t care because I know na kapag iyang bangag na -- a user is always a pusher except you are the son of an Ayala or Gokongwei”' Duterte said….

Data gathered by the ABS-CBN Investigative and Research Group show that there have been 834 drug-related fatalities from May 10 to August 4.

I commented there, "gago na sagot ito from a President."

Then a low-life comment came from nowhere, from a certain "Ben Reyes".

As I posted in the past, I was not a supporter of Mr. Duterte during the campaign period. But when he won and laid down his economic programs, I became his supporter. Yes, I support many of his plans and programs on the economy, taxation, investment liberalization, infrastructure modernization, etc. But NOT his policy on extra-judicial killings (EJKs) where deaths by the hundreds are justified.

This Ben Reyes also posted these photos, again showing deep intolerance and angst at people who do not say Halleluiah to the EJKs of the President. 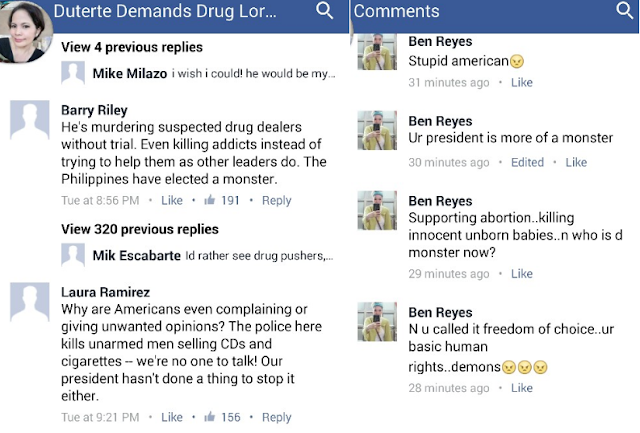 A murder culture has permeated many minds in the Philippines, from the President down to ordinary voters. This culture is characterized by intolerance, deep intolerance and impatience of contrary opinions.

And here is another low-life comment. Killing me or anyone else is now just an ordinary joke for these lousy minds. Low life. 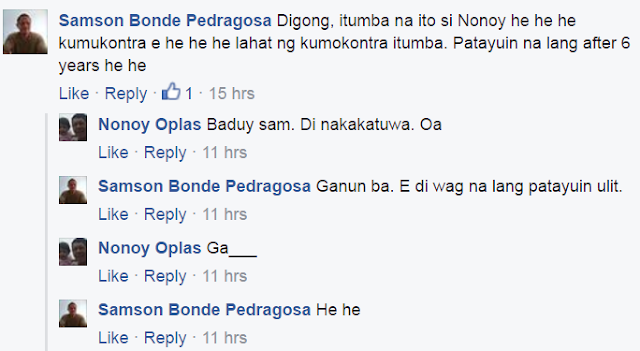 If we are to modernize as a country in the 21st century, we need a culture of tolerance to contrary opinions, a respect for the rule of law, not rule of men and mob rule. No one among the people that I know who oppose EJKs justify drug pushing and drug addiction. I myself have no sympathy to this kind of personal abuse and criminal act of drug pushing. But I cannot justify or support EJKs and murder without trials.
-------------