Brownouts, actual and potential, have returned to some areas of Metro Manila and surrounding provinces in the Luzon grid over the past two weeks. This is unfortunate because electricity demand has somehow declined because of the colder, rainy season and more power plants have been added to the grid.
This rare event was caused by heavy stress in the Luzon grid as a result of the unscheduled outage of several coal-fired, hydroelectric, oil, and geothermal power plants in the grid, many of them are already ageing. Among these coal plants were (a) 382 M-W Pagbilao’s unit 2 (U2), (b) 122 M-W South Luzon Thermal’s U1, (c) 140 M-W Southwest Luzon’s U2, and (d) 60 M-W Limay Cogen Block 5.

Among the hydro plants were (a) 50 M-W Angat Main U4 and (b) 180 M-W Kalayaan U1. Then 83 M-W from Makban Geothermal and 280 M-W from Malaya Thermal U1. Almost 1,300 MW of power went on unscheduled or unplanned outage, plus power plants on scheduled or planned maintenance shutdown.

The newly-commissioned wind and solar plants in Luzon cannot and will not be able to fill up the power deficit. If the wind DoEs not blow, wind power is zero; if it is night time or day time but very cloudy, then solar power output is zero or very low.

This situation again highlights the need to continue building new coal and natural gas plants. The proposal and lobbying by certain sectors and environmentalist groups to discontinue building new coal plants and build only intermittent renewable energy (RE) plants like solar and wind is not wise. The Philippines’ fossil fuel consumption remains among the lowest in Asia’s emerging and developed economies plus Australia. 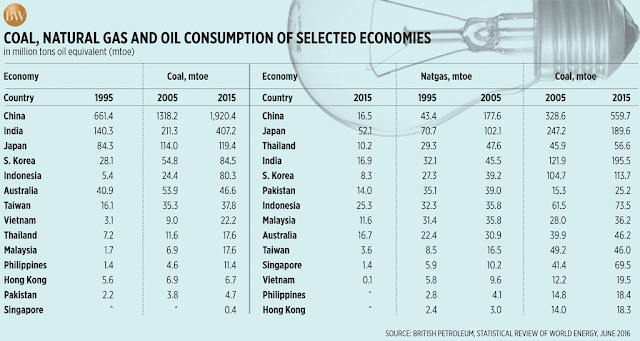 mns are for oil, unit in million tonnes, not mtoe)

Last Aug. 11, 2016, the Australian Energy Market Operator (AEMO) released its 2016 Electricity Statement of Opportunities (ESoO) report and it highlighted the growing importance of network and non-network developments to secure future electricity generation. Notable in its report is this warning,

“AEMO has modelled the impact of withdrawing a further 1,360 MW of coal-fired generation capacity to meet the COP 21 commitment under AEMO’s neutral scenario, with results suggesting potential reliability breaches occurring in South Australia from 2019-2020, and New South Wales and Victoria from 2025 onwards.”

“Reliability breaches” is a technical term for power outages or blackouts. And AEMO projects that it will take place in three to four years from now. Replacing coal power with additional RE capacity will not compensate for the loss of coal capacity.

AEMO was candid enough to categorically warn about the dangers of cutting coal power and pushing more renewables into the system. This candor is good because it will prepare both power suppliers and consumers of what’s going to happen few years on the road.

One explanation for such candor by AEMO is its independence from the government as the latter pushes for more REs.

In contrast, the Philippine Electricity Market Corporation (PEMC), AEMO’s counterpart here as electricity market operator, is government-dependent. It is headed and chaired by the DoE (Department of Energy) secretary and many board members are from the government, like the National Power Corp. (NPC), National Transmission Corp. (TransCo), and the Power Sector Assets and Liabilities Management Corp. (PSALM).

Since the DoE is the main implementer of RE Act of 2008 (RA 9513), DoE is naturally pushing for more intermittent REs into the system and that is what PEMC is exactly doing. The latter for instance produced a study in November 2015 saying that REs that are priority dispatch at the Wholesale Electricity Spot Market (WESM) have created the “merit order effect” (MOE) in reducing the market clearing price (MCP) at WESM.

So, since PEMC continues to be a government controlled corporation, can we expect PEMC to be more independent, more candid, in assessing the harm, actual and potential, of more REs in WESM and grid stability?

The most logical answer is no. The DoE cannot contradict itself, say that REs are necessary and say at the same time that REs are dangerous to the customers’ pockets and the stability of the national grid.

So the important implication here is that the independent market operator (IMO) as clearly stated in the EPIRA (Electric Power Industry Reform Act) some 15 years ago and now represented by PEMC, should be independent from government like AEMO. The DoE secretary and all other government energy agencies, including those in the “advisory” capacities, should get out of IMO or PEMC board.

Having less government intervention in the energy sector in general and the electricity market operation in particular is pro-consumer. Just give the consumers more choices, no or little coercion and they will choose the least costly, the more stable and reliable energy source.

Bienvenido S. Oplas, Jr. is the head of Minimal Government Thinkers and a Fellow of SEANET and Stratbase-ADRi. minimalgovernment@gmail.com