Demography 26, Once again on the RH law 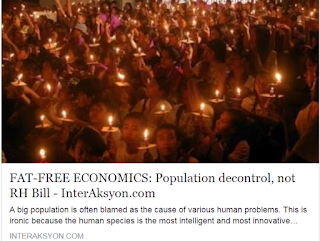 Four years ago, I wrote this paper in interaksyon and shared it in my fb wall with this note, "People are assets, not liabilities. Government should focus on promulgating the rule of law, not in expanding bureaucracies and in population control."

So my opposition to that measure was nowhere on the morality issues raised by the church. It's mainly an opposition to further government expansion. Things that can be done by civil society and volunteerism like donating pills and condoms, gobyerno pa? Gawad Kalinga, Rotary Homes, other NGOs are able to build thousands of houses for the poor via civil society, volunteerism route, NOT legislation and national coercion.

The pro-RH guys and campaigners then were gloating that because they could trump and debunk the church arguments, the more government, more state-sponsored population control argument was correct. So when I argued my position -- zero regard for church position, zero sympathy for "more government" -- many of them could not anticipate and rebut my position. But then again, it's all politics. The legislators, the DOH, PopCom, LGUs, etc. were just happy that government has further expanded.

I hardly read the church position on the RH then because I felt I could not and would not use them. My argument has zero regard for church position, catholic or otherwise. Mainly about Big government vs. civil society volunteerism.

I am pro-divorce, pro-abortion, pro-euthanasia, pro-same sex marriage, pro-drugs legalization, pro-gambling legalization, pro-taxation of church properties and income, etc. The anti-RH stance was the only position that I happened to align with the church, and it was for a different reason. :-)

Gawad Kalinga (GK) can build thousands of houses, more expensive than pills and condoms, via volunteerism. Why force the rest of the population to contribute to their "bright idea"? If an idea is bright, it does not need coercion, national coercion and arm-twisting to be implemented.

Those rich Rotarians from abroad would give money for housing for the poor here, to their fellow civil society leaders like local Rotarians. But NOT to the government when it builds housing for the poor. That is why a bright idea very often does NOT need legislation and national coercion. If done via legislation, 90-99% it is a stupid idea.

My Filipino friend in the US regularly donates to GK, yearly. He is updated by GK and so far, he is happy with the projects. He says that if he can confirm just one instance, not 2 or 3 but just one instance of corruption and stealing of his donation, he will automatically stop donating. See the system of reward and punishment via civil society? It is instant.

The same in rotary. One instance of corruption, of stealing donated money, those rotarians, their clubs, are blacklisted and implicitly shamed. Within months, not years. Goodbye to professional and business network, replaced by shame.

A friend said that distribution and allocation of tax money is up to the Legislature and the Executive, ganon  daw talaga. If so, then these things are ok with them:

1. Government will put up a jeepney and bus corporations, subsidized and funded by taxpayers of course. People can take them or not, no coercion/walang pilitan naman eh. Sila taxpayers lang ang obligado magsubsidize kasi palaging lugi.

2. Government will put up a new state university in all provincial capitals on top of existing ones. Students can enroll there or not, walang pilitan naman eh. sila taxpayers lang ang obligado magbayad.

3. Government will put up a "carinderia ng bayan" in all 42k+ barangays and villages nationwide. People can eat there or not, walang pilitan naman eh. sila taxpayers lang obligado magbayad sa subsidy. Magaleeeng.