Migration means mobility and freedom. The free movement of people along with their skills and talent, families and colleagues, culture and sports, science and technology, capital and investments, is the natural sibling of free trade of goods and commodities.

The world is far from real free trade in goods and free mobility of people, but the regional and global trend is towards more freedom, not less. The numbers to confirm this are freely available -- rising exports and imports, rising foreign investments, rising tourism. 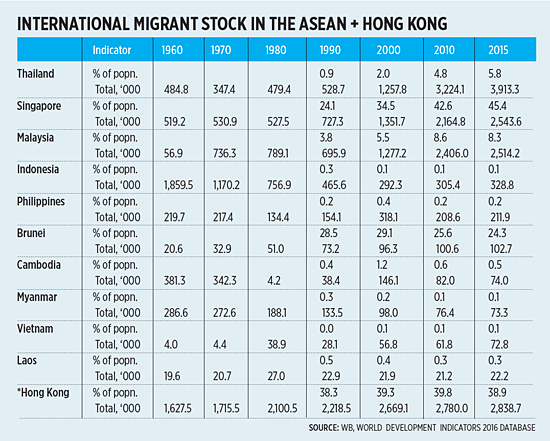 1. While there are more than 10 million Filipinos living and working abroad (workers and professionals, students, dependents), there are only 0.2 million foreigners who have migrated here, more or less permanently. The number of overseas Filipino workers (OFWs) based on Philippine Statistics Authority (PSA) is only 2.3 million, not 10 million, as explained in the table.

2. Thailand, Singapore, and Malaysia are the most migrants-friendly in the ASEAN. Perhaps they allow foreigners to own residential lands. These countries are also the top international tourism destinations in the region.

3. Laos, Myanmar and Vietnam are the least friendly to foreign migrants. While the first two are weak in exports and attracting foreign investments, Vietnam’s case is weird because it is a big exporter, its annual merchandise exports is twice that of the Philippines, yet just a few foreign migrants relocate there permanently.

4. Indonesia has a different path in migration. Nearly two million in 1960, down to more than one million in 1970, and only 0.3 million in 2015. Meanwhile, the number of Indonesians working and living abroad is rising, similar to the Philippine case.

While short-staying foreign tourists and visitors would stay in hotels, migrants would stay in apartments and condos. They contribute to rising demand for housing. Filipinos who work and live abroad do not necessarily abandon or sell their houses and condos here, they keep these to stay when they come home, or allow relatives and close friends to use them.

The housing shortage is a big problem for the Philippines and other developing countries.

In a speech by Vice-President and Housing and Urban Development Coordinating Council (HUDCC) Secretary Leni Robredo during the BusinessWorld Economic Forum last July 12, 2016, she said that the 1.4 million backlog as often reported could even reach 5.5 million, “if we will be able to have an honest-to-goodness inventory of all who do not have decent houses…. We are looking at a model demonstrated by Singapore and Hong Kong to be able to combat this problem.”

Data for Hong Kong is added in the table. Its 7.5 million local population + 2.8 million migrants + around 1-2 million tourists anytime (27.8 million tourist arrivals in 2014) is big considering its small land area. Yet housing is not much a problem there.

A quick solution to address the huge housing backlog in the Philippines is to encourage the building of more residential condos and townhouses not so much for ownership but for rental. There are at least two advantages for this.

One, more and more Filipinos are mobile these days. They may be working in Quezon City or Bulacan the previous years, they might move to Las Piñas or Cavite or Cebu in the next few years, or move abroad. Given the bad traffic condition in Metro Manila, living closer to work is a better alternative than driving long distance daily.

Two, there is less initial investments in renting than in buying a house. There is also less financial and emotional attachment to their previous house when they move out if the community has deteriorated, like getting flooded more frequently, more traffic congestion, more crime incidence, and so on.

What HUDCC and other housing-related agencies, local and national can do, is to reduce the bureaucracies and taxes for developers of condos and townhouses. These costs are ultimately passed on to unit owners, which they pass on to their unit lessors.

If there are more residential condos and apartments available, their price will naturally go down due to competition. Cheaper housing is one of the most important programs that any government can do for its people.

Bienvenido Oplas, Jr. is the head of Minimal Government Thinkers and a SEANET Fellow.
------------