Heavy rains and flash flood are natural and cyclical, nature-made and not "man-made". Big El Nino and drought is often followed by big La Nina and frequent/heavy rains. To help prevent or minimize flash flood, build more dams and "harvest" the water, instead of cursing the flood. After the wet months, or during El Nino years, we will thank the floods that deposited water in the dams.

Weird comment  from Cabanatuan City Mayor Julius Cesar Vergara, he  said, "The water really came from the mountains," Haaaaa. I thought the flood water came from the sea :-)

The problem here is that people and officials think there is only global warming and no global cooling. That there is only "man-made" CC and no "nature-made" CC. That less flood or no flood or more flood are all proof of "man-made" CC so more money should be sent to the UN, CCC, DENR, LGUs, other government bureaucracies and they will "fight" less flood and no flood and more flood. Instead of using that money to (a) build more dams in rivers upstream, (b) do large-scale dredging of silted rivers and lakes, or (c) build artificial lakes in low-lying areas as temporary dumping ground of heavy flash flood.

Three days ago, Rappler hosted the "Green SONA 2016" (State of Nature Assessment). For the climate alarmism movement, if there is less flood or no flood, we should be alarmed. If there is plenty of flood, we should also be alarmed. Whatever weather and climate -- wet or wetter, dry or drier, hot or hotter, cold or colder -- we should be alarmed, be worried, be scared. Thus we should send more money to the UN, CCC, DENR, LGUs, WWF, Greenpeace, etc -- and they will save us from less flood and no flood and more flood. http://www.rappler.com/.../142048-live-green-convergence...

For the "man-made" warming/CC religion, these non-stop rains and flooding elsewhere were caused by our modern life, by our cars, air-cons, energy-intensive industries and condos and malls and airplanes and buses. http://interaksyon.com/.../habagat-to-dump-rains-on-luzon... Thus, we should have less fossil fuels, less or no coal power plants. Modern life via reliable and cheaper electricity from coal is wrong, that is the message of CCC and Manny de Guzman, Lucille Sering, Yeb Sano, Tony la Vina, Sens. Legarda and Zubiri, etc. 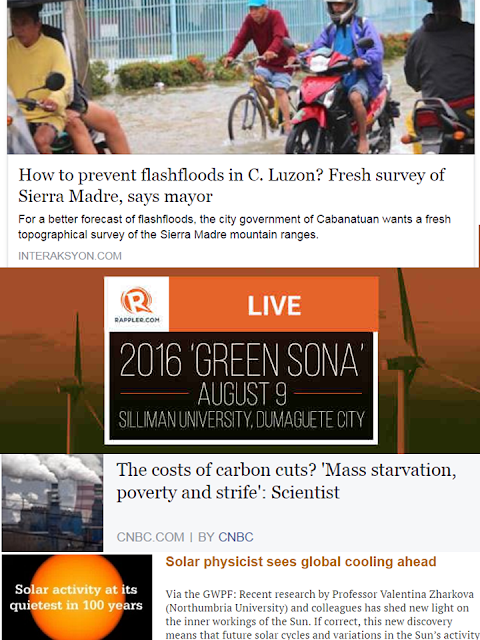 1. "In peer-reviewed research, Kelly argued carbon dioxide should be considered the byproduct of the "immense benefits" of a technologically advanced society. Cutting carbon, he added, could result in a dramatic reduction in the world's quality of life that would usher in mass starvation, poverty and civil strife. Massive decarbonization is "only possible if we wish to see large parts of the population die from starvation, destitution or violence in the absence of enough low-carbon energy to sustain society." http://www.cnbc.com/.../climate-accord-irrelevant-and-co2...

Posted by Bienvenido Oplas Jr at 1:19 AM