BWorld 78, If the US becomes protectionist, who loses?

As the US presidential election nears, many issues have become convoluted as expected in any major political exercise.

One issue that gets murky is trade.

Mr. Donald Trump has been vocal about some of his protectionist pronouncements like attacking the US involvement in the Trans-Pacific Partnership (TPP) while Mrs. Clinton is less gung-ho about protectionism.

Last July 26, 2015, Bloomberg produced an article, “If Trump Wins, Asia Loses.” This story was shared by many Filipinos in Facebook and other social media platforms because the Philippines was mentioned.

“An investor survey conducted earlier this month by Nomura Holdings, Inc. flags a long list of worries under a Trump presidency: from a possible rise in trade protectionism…

The Philippines faces risks because of possible immigration restrictions. The US is host to 35 percent of the total number of Filipinos working abroad, and Nomura estimates they account for about 31% of total worker remittances, a key source of foreign inflows for the local economy.

The Philippines has one of the biggest export exposures to the US in Southeast Asia and Trump’s pledge to bring jobs back to the US may threaten the nation’s burgeoning business process outsourcing sector. The industry caters mostly to US companies and attracts revenue that may equal the size of total worker remittances, about 9% of GDP, over the next two years, according to Nomura.”

There are a number of misinformation stated in this report.

One, in trade theory and practice, the big loser in protectionism policy is the protectionist country, not its trade partner/s.

By making otherwise cheap goods from abroad become expensive, that country is penalizing its own consumers and manufacturers. In which case, the title of the piece should be “If Trump (and protectionism) wins, America loses.”

Two, the US’ merchandise trade exposure in Asia is huge, indicating that US households and businesses make substantial income and savings when they export to and import from Asia than Europe or Central and South America. In 2014, 27% or more than one-fourth of its exports went to Asia, its second biggest continental trade partner next to its North American neighbors, and bigger than Europe. And almost 40% of its imports that year came from Asia or slightly lower than its imports from North America and Europe combined at 46.5%.

Three, while the Philippines exported $8.4 billion to the US in 2014, it also imported $10.1 billion from the US, so it makes little sense to antagonize the Philippines with protectionism when the US earns more from the partnership. The US BPOs here means those US companies provide good services and backup support to their customers worldwide by utilizing cheaper and efficient personnel in the Philippines.

The table shows merchandise trade of the United States by origin and destination, 2014, $ million and percentage. 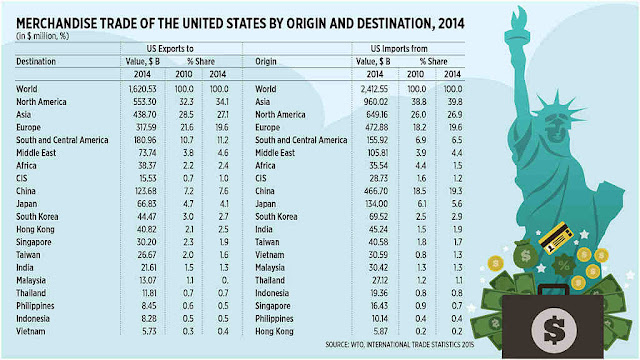 Four, a graphical presentation that the bigger loser of protectionism policy is the protectionist country, not the trade partner/s would look like this: Imagine a supply-demand curve with equilibrium or market-clearing price of P* for all trading countries. Country A becomes protectionist, its supply curve moves to the left so its new equilibrium price goes up to P1, higher than P*, or P1 > P*.

In contrast, countries B, C,... remain free traders, their respective supply curves move to the right, their new equilibrium price moves lower to P2, or P2 < P*. Consumers and manufacturers in these countries will be happy with more supply of various products and result in lower prices owing to trade diversion from protectionist to other free trader economic partners. There will be some short-term business dislocation, true, but firms and people adjust or even anticipate these changes and have plans B and C in place, including bigger trade among non-protectionist economies.

If America -- whether under Mr. Trump or Mrs. Clinton -- will become protectionist, America loses, not Asia. Free trade, more choices, more economic freedom, is the best policy that a government can give to its people.

Bienvenido S. Oplas, Jr. is a SEANET Fellow, head of Minimal Government Thinkers, and both institutes are members of the Economic Freedom Network (EFN) Asia.
---------------