BWorld 76, Solar can never power the PH and Asia

* This is my 3rd article in the special issue, BusinessWorld Anniversary Report last July 25, 2016. Due to limited space, the table was not shown but the arguments and texts are retained. 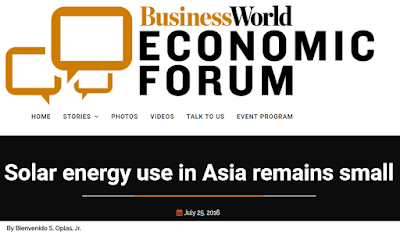 The rapid pace of economic growth in East Asia over the past two to three decades coincided with, or was facilitated by, high energy capacity largely coming from coal power plants.

The table on the right shows the following:

1. The Philippines has a small electricity production, only 83 TWh in 2015 or just one-half (1/2) that of Vietnam and Thailand and only one-third (1/3) that of Indonesia. This is a reflection of its low installed power capacity relative to its neighbors.

2. China and Vietnam have significantly expanded their electricity production in the last two decades by nearly 500% and 1,000%, respectively. This coincided with, or significantly contributed to, their high GDP expansion of 769% and 426% respectively for the same period. China has a very high level of coal use, 1,920 mtoe in 2015 while Vietnam has a very high % expansion of coal use, 616% in just two decades.

4. The eight other Asian economies have benefited from higher electricity generation, higher coal use, and coincided with or facilitated higher GDP size expansion in just two decades.

5. Solar power consumption in Asia remains very small. Less than 0.05 TWh in 2015 for six of the 12 economies — Vietnam, Hong Kong, Malaysia, Philippines, Singapore and Thailand. Thus, statements that many Asian economies have (a) significantly embraced new renewables like solar, and (b) their use of coal power is declining as they shift towards more solar and wind power – are preposterous.

During the BusinessWorld Economic Forum last July 12, 2016, the subject of Philippines’ power and energy policies was mentioned several times by different speakers.

In his keynote speech, First Pacific Co. Ltd. managing director, said that “The recent heightened interest in renewables is understandable. But let me say this: for now, renewables cost more than conventional power, which means higher power prices. There’s a cost to protecting our environment — no such thing as free lunch.” He added that we are heading towards sufficient power capacity and majority of these power plants are coal.

DoF Secretary Carlos Dominguez III partly mentioned the importance of a realistic energy mix that will not burden the consumers with high electricity prices.

In the panel on Disruption, Solar Philippines’ President Leandro Leviste argued that “solar is now cheaper than coal.” He added that batteries to stabilize solar output that currently costs an additional P2.50 per kWh to solar power can significantly drop by one-half by 2020. Still, he argued, that solar + battery prices, solar can replace all gas, oil, and diesel in the Philippines.

In the panel on Infrastructure Capacity, Eric Francia, President & CEO of Ayala Corporation Energy Holdings, Inc. showed one slide where the Philippines’ power capacity 2014 was only 15.6 GW vs. Vietnam’s 40+ GW.

Finally, in the same panel on Capacity, Erramon Aboitiz, President & CEO of Aboitiz Equity Ventures, Inc. (AEVI) said that the Electric Power Industry Reform Act of 2001 (EPIRA, RA 9136) is working. It stopped the financial drain of government with heavy NPC monopoly losses and debts, attracted investments from the private sector and competition has driven down power rates. He rightfully argued that in deciding the energy mix, affordability to consumers and stability of power supply should be a priority for the government. The open access and retail competition provision give customers the power of choice.

There are several ways that expensive solar energy will burden the consumers in the coming years. One, the high feed in tariff (FiT) of P8.69/kWh in 2015, that becomes P9.69/kWh in 2016, that will become roughly P10.70 by 2017, and further rise in 2018 and beyond as indexation to inflation rate and other factors are inserted. Two, this ever-rising solar price is assured for 20 years for each FiT-eligible solar company. Three, even consumers in Mindanao who are not connected to the Visayas-Luzon grids and not part of WESM energy trading are forced to pay this expensive FiT. Four, the priority or mandatory dispatch into the grid even if cheaper sources like coal that can be sold at marginal price of only P1 to P1.50/kWh during off-peak demand hours and days are available. And five, the impending renewable portfolio standard (RPS) will force, coerce and arm-twist many or all the distribution utilities (DUs) in the country to buy a minimum percentage from expensive renewables, the additional cost will be passed on to the consumers.

The government should step out of energy rationing and cronyism. Consumers should be given the freedom to choose, to buy from cheaper energy and avoid expensive electricity. Current legislation via the RE law of 2008 (RA 9513) that institutionalizes energy cronyism should be amended or abolished. This is one policy measure that President Duterte and DoE Secretary Cusi can consider in the next six years.