I am reposting this post last Tuesday by a friend, Bernard Ong. It has gone viral, shared nearly 6k since more than two days ago. Keep writing this kind of analysis, bai. Thank you.
-------------


HE CROSSED HIS RUBICON 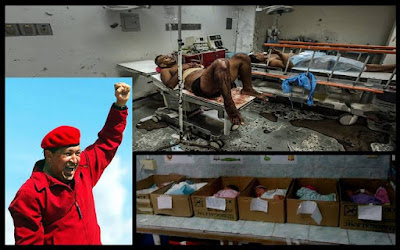 Updating my May 2016 post on Hugo Chavez. Very important lessons for the Philippines today. The photo collage shows 3 things: An emergency room in Venezuela - hospitals have broken down to the point that there are shortages of basics like soap, gloves & medicine. A nursery where babies are kept in boxes. And the man who started it all – who crossed his Rubicon, the “point of no return”, and dragged his country into the abyss.

In 1998, Hugo Chavez was elected president of Venezuela.

1. He promised “order" and a "strong hand to fight crime & corruption"
2. His friends, relatives, leftists & military cronies took key positions in government
3. He amended the constitution, giving himself greater powers; abolished existing checks and balances, congress & the judiciary; giving the military a major role in governance
4. He launched his paper, own radio show & TV show – where he mixed socialist rhetoric with songs & jokes
5. He alienated the Church
6. He waged war against "oligarchs" declaring "being rich is bad"
7. He nationalized companies in key industries – oil, finance, telecoms, transport, power
8. He demonized the US
9. He aligned with Russia, bought billions in arms from them
10. He allowed China to take over large areas of the economy.

Sounds familiar? Not a coincidence, Hugo Chavez is the template for modern-day socialist dictator wannabes.

Chavez stayed long in power, getting reelected several times & even coming back after being ousted by a coup. Venezuela was a major oil exporter & oil prices were high. Oil profits bankrolled his social welfare programs to buy popular support. He died in office in 2013.

1. He imposed currency controls to prevent capital flight. - This policy prevented companies from buying equipment, supplies & raw materials, eventually leading to shortages in production.
2. He imposed price controls – This policy drove local suppliers stop producing just as imports were scarce due to currency controls. This led to shortages & inflation.
3. His government spent far more than it could afford – This policy caused Venezuela to run huge fiscal deficits & incur heavy debts when oil prices collapsed from $120+ per barrel in 1998 to $60 in 2015.

Basically, Chavez didn’t know math & couldn’t care less about policy. In his mind, he was always correct & it was the world’s responsibility to adjust reality to his view.

There are shortages of everything – energy, gasoline, food, medicines. There is rationing & widespread looting. Crime is far worse. Consumers line up to wait for food from 4am. Those who buy “too much food” are arrested on grounds of violating laws against interfering with the production, transportation or sale of food. Pets like dogs & cats are let go by owners, because it is costly to feed them. Those are the lucky ones. The unlucky ones become meals to feed hungry humans.

Inflation was 150% in 2015, estimated at 481% in 2016, and 1642% in 2017. In Philippine terms, your one peso today will be worth 6 centavos in 2017. Tough labor laws make it impossible for business to fire workers. It doesn’t matter anyway as workers’ wages are unable to keep up with inflation - they provide cheap underpaid labor. GDP is forecast to decline 10% in 2016. There is massive unemployment. 75% of the population live in poverty.

And corruption? The richest Venezuelan today is reported to be Maria Gabriela Chavez, Hugo's daughter with $4.2 billion stashed overseas. She ignored daddy's "being rich is bad" dogma. Smart hija did not cross the socialist Rubicon.

Who does Venezuela blame for this policy-induced disaster? President Maduro – the successor of Chavez – blames the mess on a “conspiracy” by the United States.

We've seen his type here at home before. Marcos' 14-year dictatorship – hyped to fight communism & restore order – ended up sucking the Philippine economy dry & led to world-record plunder by the Marcos family. He too crossed his Rubicon when he imposed Martial Law & plunged the country into darkness.

The next time a leader says he is crossing his Rubicon, do your homework – check the policy implications, do the math, think steps & years ahead. If it does not make sense, step back from the abyss. Your country will need you to help clean up the mess after the disaster.
--------------