Private property and its protection is among the cornerstones of a free society. It bestows upon the individuals, households and enterprises exclusive rights what to do with their private property like a car or a piece of land -- use it, sell it, rent it out, or donate it.

When private property rights are unprotected, society can quickly degenerate into chaos and disorder. Gangs and bullies can confiscate other people’s houses, cars, or shops, and the enterprising people will flee and escape such society and only the lazy, bullies, and opportunists will stay.

Measuring property rights protection across many countries has been done by the Property Rights Alliance (PRA), a Washington DC-based think tank. It produces the International Property Rights Index (IPRI) annual reports and partners with independent, nongovernment and market-oriented think tanks and institutes from many countries around the world in spreading the philosophy and measurement of protecting private property rights.

The IPRI 2016 Report was released in partnership with 102 independent think tanks from 70 countries and it was launched on Aug. 10, 2016 in Delhi, India.

“Property rights are the linchpin of a prosperous society. They say what is yours, what is not, and how to exchange with others in order to create value... that is why they are human rights and essential to individual liberty.”

IPRI is derived by getting the score (1 to 10, 10 being the highest) of each country covered in three major areas:

(1) Legal and Political Environment (LP), which covers judicial independence, rule of law, control of corruption and political stability of a country or economy.

Thus, countries with high scores in two or all three of these areas will have a high IPRI overall score and global rank.

Below are the scores and global rank of ASEAN (Association of Southeast Asian Nations) countries and their neighbors in the region. Three ASEAN countries -- Brunei, Cambodia, and Laos -- were not included in the IPRI annual reports, mainly for lack of reliable data for comparative purposes. Myanmar was included only starting 2015. 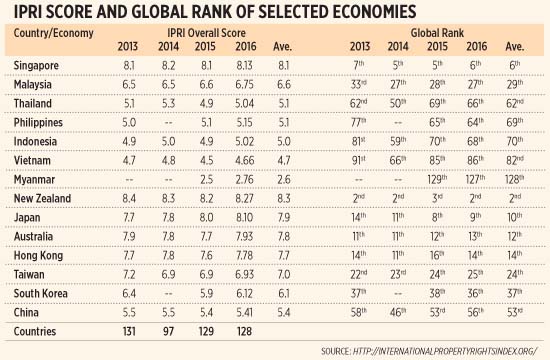 The table show the following:

1. The more developed the economy is (Singapore, New Zealand, Japan,...), the higher the IPRI score and global rank. Which implies that as private property is better recognized and protected, there are more economic activities that occur.

2. Emerging markets of the ASEAN except Thailand have improving global rankings: Malaysia, Philippines, Indonesia and Vietnam. The decline in Thailand’s ranking coincided with the rise of the military leadership there.

The continuing uncertainties in human rights protection due to the ongoing extrajudicial killings (EJKs) related to the drugs war of the Duterte administration may have some negative repercussion in the country’s future low scores and position in rule of law and judicial independence. These two are part of the Legal and Political environment (LP). There is danger of a possible decline in the Philippines’ overall IPRI score and global rank if these uncertainties continue for long.

The main functions, the raison d’etre or reason for existence of governments are to enforce the rule of law, to protect the citizens’ right to life (against aggressors, murderers, rapists, etc.), right to private property (against thieves and destroyers of properties), and right to liberty (against censorship, bullies and despots).

Private property rights as human rights are good incentives for the people to become productive citizens and stay away from being dependent on state welfare. Governments should stay the course in securing this philosophy and veer away from forcing equality by penalizing the hard working with high, multiple taxes, fees and permits.

Bienvenido S. Oplas, Jr. is the President of Minimal Government Thinkers and a SEANET Fellow. Both institutes are among the 102 independent organizations and partners of PRA in producing the IPRI 2016 Report. minimalgovernment@gmail.com