A declining share of agriculture gross value added (GVA) in GDP (gross domestic product) is often viewed negatively by many sectors because it implies that a country is not prioritizing rural development and job creation. Is this a valid observation? Let us review some agriculture data of the Philippines and compare them to its neighbors in the ASEAN and then we tackle that question in the latter part of the paper (see Table 1). 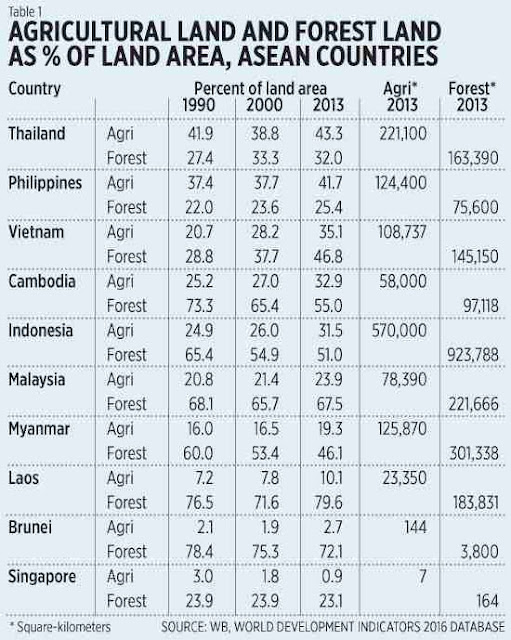 The numbers above tell us the following.

2. In land area devoted to forest, the Philippines and Singapore have the smallest forests in square kilometers. This is despite the increase in the Philippines from 22% in 1990 to 25.4% in 2013. Laos, Brunei, and Malaysia lead in this category.

3. In terms of deforestation (conversion from forest to non-forest land uses), the highest or fastest rate from 1990 to 2013 was experienced in Cambodia, which declined by 18%; Indonesia and Myanmar, which both declined by 14%. Still, their respective forest covers remain high.

4. Those that experienced an increase in both agriculture and forest as percent of land area from 1990 to 2013 are Thailand, Vietnam, and the Philippines. Laos too, though at low rate. One possible explanation for this would be a double counting in the case of agro-forestry plantations. The Department or Ministry of Agriculture would count them as agricultural lands while the Department or Ministry of Environment/Forestry would count them as forest lands.

5. Those that have big potential for more agriculture land expansion are Laos (only 10% in 2013) and Myanmar. Becoming big rice exporters like Thailand and Vietnam will be a big possibility for these two countries (see Table 2). 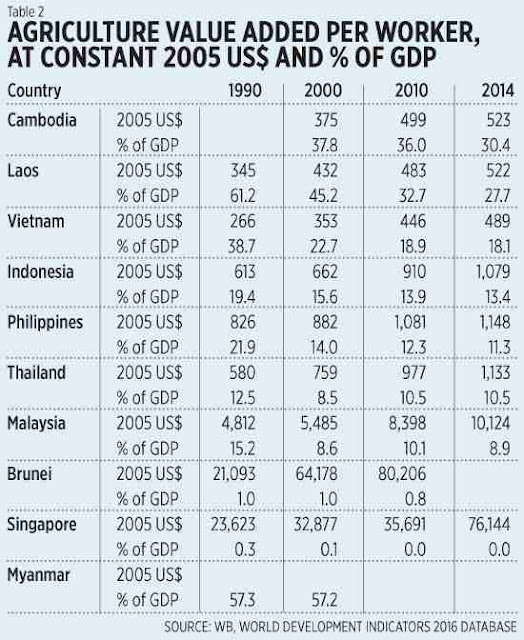 The above numbers tell us the following.

1. In terms of agriculture GVA per worker, Brunei and Singapore are the highest, their huge wealth allows them to employ high technology farming per hectare of land in the region. The Philippines is on a similar level as Indonesia and Thailand while the lowest, surprisingly, is not Laos or Cambodia but Vietnam.

2. Agriculture GVA as percent of GDP, Cambodia, Laos and Vietnam are the highest and the Philippines is again on similar level as Thailand and Indonesia.

3. Notice how the Philippines has reduced this ratio for more than two decades by one half, from 22% in 1990 to only 11.3% in 2013. Laos and Vietnam also made this fast transition of reducing the share of agriculture to GDP.

So, is a declining share of Agriculture/GDP bad for the economy in general and rural folks in particular?

No. The cases of our more developed neighbors Singapore, Malaysia and Thailand, as well as other rich East Asians like Japan, South Korea, Hong Kong, and Taiwan show that this is the trend that they exactly experienced.

This means that while agriculture is growing, the industry and services sectors are growing much faster and hence the denominator, overall GDP size, is growing faster too.

The services sector is important because it is the forward linkage of both agriculture and industry. Producing lots of vegetables, fruits, chicken, rice, fishery, and cattle products will be limited and compromised if there are not many restaurants, supermarkets, public markets, talipapa, carinderia, litson manok and related outlets -- all of which are in the services sector.

Proposals therefore to pour more public resources and tax money to the farmers like free or highly subsidized tractors, machine harvesters, seeds, irrigation, rice subsidy via the NFA, etc. to “correct past negligence” of agriculture may not be always correct.

Government support to agriculture should be limited therefore to basic infrastructure like modern farm to market roads and bridges, seaports for quicker delivery of bulk produce from big islands like Mindanao, Panay, and Mindoro. And more dams and big water impounding projects mainly for (a) controlling fast flood during heavy rains, impound the water, and (b) irrigation when the rainy season has subsided or ended.