Tax cut 26, Excise tax on petrol products should be reduced/abolished, not increased

"People try to live within their income so they can afford to pay taxes to a government that can't live within its income." - Robert Half 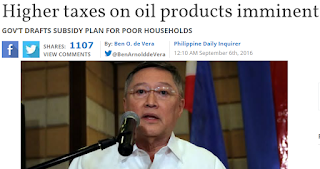 This bad tax measure has been proposed by the DOF and some legislators many years ago but never succeeded. This time, it looks different as the new Duterte government is hell-bent on having this become a law within the year or next year.

Bad. Very bad. But can be acceptable if personal income tax rates will be slashed to 20% max, better if 15% max. Otherwise, bad. Very bad.

This government can be bad if such huge tax hike in petroleum products is not compensated by huge income tax cut.

Last July 12, 2016 during the first BusinessWorld Economic Forum, among Sec. Dominguez's proposals was a zero income tax for those earning P1 M/year or less, which is very good. Things have changed in just two months.

It is misleading for the DOF to say that only the top 10% of the population are the biggest consumers of gasoline. The most affected will be the small and micro entrepreneurs who can not easily raise prices because of the competitive environment.

The only mitigating or compensating measure here would be a huge income tax cut, so that people will have more money in their pockets that they must shell out back to government in the form of higher consumption taxes like excise tax for gasoline and diesel. Imagine, from zero to P6/liter. Very parasitic thinking by government. And obviously inspired or pushed by the WB, IMF, ADB, other foreign aid.

It is very parasitic to claim that petroleum products are "public bads" that must be taxed as high as possible to have a "clean environment". NO. Petrol products are public goods, without them, there will be massive poverty, massive underdevelopment, massive hunger in this country.

People want to walk or ride bicycles or horses/cows over long distance because cars, buses, trucks, jeeps that use petrol products will be limited or curtailed? Huge volume of animal manure on the roads alone will make our environment dirty, foul and ugly.

If fisherfolks will use manual paddle of their fishing boats, if farmers will use carabaos or cows instead of faster and stronger tractors in tilling their farms, or harvesting and threshing their harvest, see the negative impact of very low agri and fishery productivity.

A friend, Peter A. commented,

"I'm all for this, our petroleum taxes are among the lowest among importing countries. I'd split the tax so that you can incentivize certain behavior. Higher taxes for fuel but a lower category similar to the current jeepney diesel subsidy to public transport (commercial passenger and trucks) , for private vehicles keep the higher tax category. In the long run you want to disincentivize individual car use as this makes livable cities difficult. This goes hand in hand with many other urban planning tools, like zoning, parking subsidies etc. Besides even with a Php 7 and Php12 tax, this is still lower than a few years ago so the economy can take it."

The low oil prices were important contributor for very low inflation rates in the PH in the last 2-3 years. Bringing back gas prices to near P50 or near P60 a liter, and diesel to near P40 a liter, will automatically push overall inflation rate to higher levels. And more poor people will complain. Then govt will say, "we need to raise further oil taxes to finance more subsidies to the poor." Vicious cycle.

If petrol taxes will rise at high levels, more people will buy motorcycles, or small cars with low oil consumption per kilometer, and the same traffic congestion we will experience. Meanwhile, the cost of transpo of rice, vegetable and fruit dealers, fish and meat dealers, both in trucks and boats, will rise. Which means they will pass the additional cost to the consumers. Petroleum is a public good, not public bad.

Peter added, "actually all we've learned from centuries of urban planning and learning how cities work show that this blunt initiative is effective in curtailing car use. It would work even better if, as I mentioned in my comment to Butch , we add more taxes on cars , parking ( add taxes and take out the inherent subsidies) and do congestion pricing. On a world wide level where cities have done this,it works. As for the inflationary aspect, take note that I'm for expanding the current subsidy on public transport, that includes any sort of regulated transportation that has a certificate of public convenience. We already have this with the jeeps, so expand this to buses, cargo trucks, taxis etc. So that the public good aspect is not affected. 80% of vehicles on the road is taken by 20% of the private vehicle owning public, we need to reverse this . If we take a look at the most succesfull capital cities private car use is but maybe 10%. This at least give the car owner a choice, to use public transport however ineffcient or pay a bit more. Add in all the other measures we'll surely have a more livable city."

Another reason why I want the PH to disintegrate into many countries. A central government will always impose a one size fits all policy. Whether a province or island has efficient mass public transport or not, the policy applies uniformly. The Manila-based government thinks that taking out more cars, motorcycles, buses from the roads to be replaced by trains (even if the infra in many areas are not there yet) will also apply to island-provinces like Masbate, Catanduanes, Bohol, Romblon, Camiguin, Biliran, Guimaras, Basilan, etc. For these islands, reliance on petroleum is very high, they cannot bike or run or ride a bus from their province to the next. They must ride a boat, then take a tricycle or jeep or bus to their destination. A rise in petrol prices by at least P6/liter will significantly affect their mobility, the cost of their goods and services traded across islands.