Variable renewable energy (RE) like wind and solar are far out from giving humanity sufficient, stable, and cheap electricity to sustain growth and fight poverty. For the simple reasons that they are very intermittent and expensive. Below are five of the common myths that we hear and read about wind and solar.

1. Solar, wind, biomass, and other REs will replace fossil fuels as major global energy sources in the near future.

Wrong. From the projections by the two of the world’s biggest oil and gas companies, these REs, which may also include geothermal, will produce only 8.5% of global energy demand (Exxon Mobil data) or 6% (British Petroleum data) by 2025.

2. The share of coal, gas, and nuclear will further decline as the world moves towards implementing the Paris Agreement of 2015.

Wrong. From both EM and BP projections, there is no let up in global use and demand for fossil fuel and nuclear sources in the near future. This is for the simple reason that people anywhere dislike power interruption even for one minute, much more frequent and involuntary outages lasting many hours, daily or weekly. 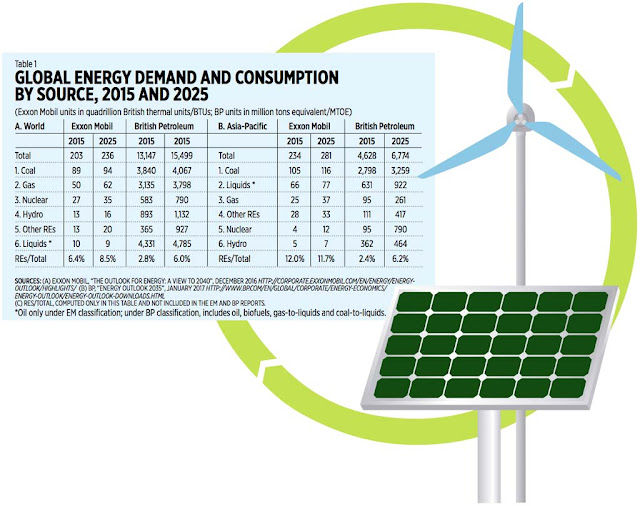 3. Solar and wind are cheaper than coal now, their overall costs will keep falling.

Current power prices in Mindanao are only around P2.80/kwh as many new huge coal plants compete with each other along with hydro and geothermal plants. No additional charges.

4. Solar and wind have no social cost (SC) while the SC of coal is very high.

Wrong. Solar and wind are very land-intensive and, as a result, more areas for food, commercial, and forest production are diverted to accommodate more solar and wind farms. To have 1 MW of installed solar power, one will need about 1.5 hectare of land. So to have a 300 MW solar plant, one will need about 450 hectares of land; San Miguel power has a 300-MW coal plant in Mindanao sitting on only 30 hectares of land, or hectare/MW ratio of only 0.1 for coal vs. 1.5 for solar.

Since solar has a low capacity factor, only 18% of its installed capacity -- from 450 hectares of land with installed power of 300 MW -- can actually produce only around 54 MW.

Majestic solar, 66.3 MW in CEZA, Rosario, Cavite is not included here because it is a rooftop facility and hence, does not occupy extra land area.

Wrong. CO2 is not a pollutant or evil gas. It is a useful gas, the gas that we humans and our animals exhale, the gas that our rice, corn, flowers, trees and other plants use to produce their own food via photosynthesis. More CO2 means more plant growth, more food production, more trees regenerating naturally, which have cooling effect on land surface.

The above five myths were among the topics discussed during the World Wildlife Fund (WWF) and Institute for Climate and Sustainable Cities (ICSC) “Roundtable on Philippine Energy Security and Competitiveness” last Friday, March 17 at UPSE in Diliman, Quezon City. The main speaker was Dr. Majah Ravago of UPSE and EPDP and she presented the main EPDP paper, Filipino 2040 Energy. The five reactors included Jose “Viking” Logarta of the ICSC and Dr. Christoph Menke of Trier University of Applied Sciences in Germany. Dr. Menke discussed the GIZ paper criticizing the EPDP paper. 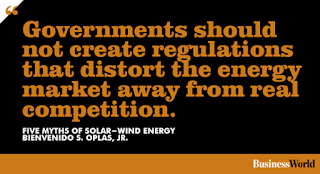 Governments should not create regulations that distort the energy market away from real competition. Insisting on dishonest claims like “carbon pollution” and “renewables to save the planet” only lead to more expensive and unstable energy supply, wasteful use of land and other natural resources.
-------------