If this is done in the Philippines or in any other country, then many people will stop working.Or they may work 6 days a week but also drink and party 6 nights a week and have zero savings. 100% formula to be poor. Then they will be entitled to those freebies that will not be given if they are not poor.

The targetted beneficiaries will expand every year, or every month. When anti-capitalism, anti-inequality NGOs, politicians, academics, etc. advocate that "If you are poor, you are entitled to lots of freebies", then more people will declare themselves poor, they will scream and curse if government does not give them the freebies.

Before, the poor were mostly walking or riding cows, horses and bicycles. Now the poor are mostly riding motorcycles, tricycles, e-bikes, jeepneys. Before the poor were using smoke signals or doves or snail mail to communicate, now they use cellphones with fb, twitter, emails. There is marked improvement in the quality of life of the poor yet by official measurements, "poverty remains high". Raket na, large scale.

I can understand new welfare programs, they are implicit and explicit admissions that some old but still existing welfare programs are not working and simply waste of taxpayers money. So if new welfare programs have to be created like the CCT, some old welfare programs should be abolished and defunded. This is not happening. The racketeers in these non-working programs create endless alibi that they are still relevant, and OP and Congress agree, so tuloy-tuloy ang over-spending, over-borrowing.

Now these two developments -- CPP-NPA-NDF negotiators in Europe who are mostly non-Filipinos anymore and have acquired European citizenship -- demand free land distribution to farmers. And squatters or illegal land settlers have moved further, became illegal housing settlers. And they were rewarded by the President, the houses they illegally occupied is given to them for free. 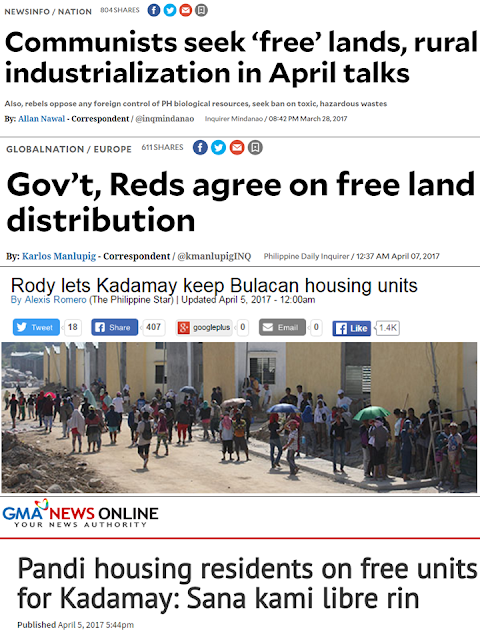