Open pit mining (OPM) is not as scary and draconian as many activists would paint it to be. Thus the ban on OPM by the CA-rejected ex-DENR secretary Gina Lopez has little or zero technical basis, only emotional outburst.

The Mining Industry Coordinating Council (MICC), the multi-stakeholder body on the sector has finally decided that the ban on OPM should be abandoned and new DENR Secretary Roy Cimatu has said that he will soon issue a new department order for this.

OPM is done and practiced in many countries including developed ones like the US, Australia, Germany, Sweden and Canada. Mining firms and their stockholders get good income, governments get huge tax revenues, many workers get long-term high-paying jobs, and consumers worldwide enjoy continued supply of electricity, gadgets, appliances, cars, steel bars and numerous other products of mining. (See table) 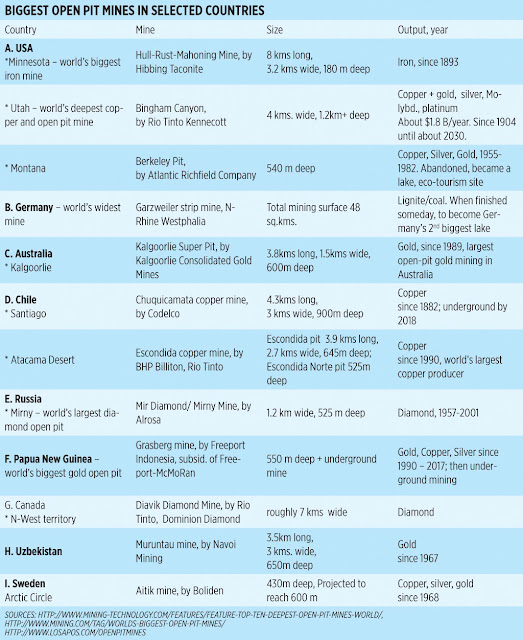 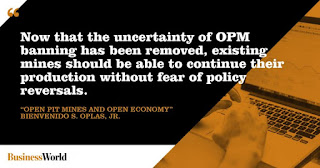 Now that the uncertainty of OPM banning has been removed, existing mines should be able to continue their production without fear of policy reversals. The image of the country as having fickle, atras-abante investment policies should be somehow corrected.

New, big prospective mining projects in the Philippines will hopefully see the green light for their operations. Two of those big potential projects are (1) the $2-billion MVP-led Silangan gold mine in Surigao del Norte, and (2) the $5.9-billion Tampakan gold-copper project in South Cotabato. The latter is actually the Philippines’ single biggest foreign investment project and is expected to bring huge income for the locals and the government, national and local.

Many local anti-mining groups vehemently oppose the Tampakan project citing thousands of hectares of land that will soon be wasted. That is an outright exaggeration. The copper-gold ore extraction in just one area is projected to be about 2.5 kms. wide, 3 kms. long and about 0.8 km deep, after 17 years of operation. This is significantly smaller than the Hibbing and Bingham Canyon in the US, among other big OPMs in the world.

Government should simply set the parameters and criteria for business to follow based on existing laws, like the Mining Act of 1995. Once government has given its permit and approval for a mining project, it should simply monitor the players that they comply with the laws and penalize violators, not change rules midway and in the process, violate the laws that it is bound to follow and implement in the first place.