During the ASEAN Summit + Related Summits in Manila, trade and the further deepening of economic integration was among the major topics. There were new initiatives as well as updates to existing negotiations at multilateral and bilateral free trade agreements (FTAs).

Here are some of those old and new FTAs as reported in BusinessWorld from Nov. 13-16:

4. “US agrees to explore FTA with Philippines” — to be called the US-Philippines Trade and Investment Framework Agreement (TIFA).

Free trade is good, regardless of what those against it would say because it always results in “net gains.”

There are always gains/winners and pains/losers the same way that there are gains and pains under protectionism. When people withdraw their savings for several months in exchange for a new car or dream vacation, they derive net gains from trade of savings vs. vacation.

ASEAN is known for its fast pace of tariff liberalization towards zero compared to many other economic blocs in the world. That’s the good news.

The bad news is the big increase in non-tariff barriers (NTBs) or non-tariff measures (NTMs). These are restrictions and barriers other than tariffs and taxes that make imports or exports of products more difficult, more complicated and hence, more costly (see table). 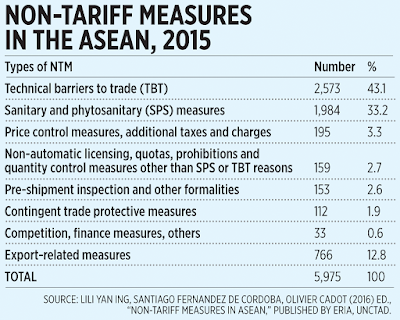 The authors also noted that “As the average tariff rates of ASEAN countries decreased from 8.9% in 2000 to 4.5% in 2015, the number of NTMs had increased from 1,634 measures to 5,975 measures over the same period. The increase of NTMs was notable not only in ASEAN but also around the world, particularly, between 2008 and 2011.”

The most common NTMs in Thailand and Myanmar was sanitary and Phytosanitary (SPS) measures while for the other eight ASEAN countries, technical barriers to trade (TBT) was most common.

So which way to achieve regional if not global free trade: (a) Multilateral via World Trade Organization (WTO), APEC, TPP, RCEP, AEC, others ; or (b) bilateral like US-Philippines TIFA, Japan-Philippines Economic Partnership Agreement (JPEPA)?

The advantage of multilateral liberalization is that all economies in the world or at least in the region are committed to bring down their tariffs and NTMs. The disadvantage is that under WTO, real liberalization remains far off even after 22 years (1995 to present) of numerous negotiations.

The setback of regional FTAs is that while member-countries can have near-zero tariff and reduced NTMs, other countries outside the FTA are slapped with high tariffs and/or multiple NTMs.

The advantage of bilateral liberalization is that differences and disputes can be ironed out easier and faster so that FTA can materialize soon. The disadvantage is that a country will need to dispatch plenty of trade negotiation teams to deal with many countries and hence, it can be costly and messy.

A third way is via unilateral liberalization.

Just bring down the tariffs and NTMs, open up the borders with little or no conditions. The main advantage of this move is that it can be done quickly with very little trade negotiation teams and hence, non-costly to taxpayers. However, the disadvantage is that it is “too scary, too radical” for many people as it might result in massive labor displacements.

There are a few countries that boldly took unilateral liberalization and so far, almost all of them have attained economic prosperity in just a few decades such as Hong Kong, Singapore, Dubai/UAE, Chile.

With continued modernization in the information and communications technology worldwide, it is much easier, not harder, to liberalize trade in services.

Asian economies, the Philippines in particular, should consider a unilateral liberalization policy. This would involve fewer trade bureaucracies, taxes and subsidies, and more competition from more suppliers and manufacturers from countries around the world. Local consumers will benefit from more choices and more options while shelling out less taxes and fees.