Is there a connection between tourism and the travel time to and from the international airport and the city proper?

I asked myself this question while I was reading Eva Air’s inflight magazine en route to Houston, Texas.

I spent a total of 17 hours traveling — two hours from Manila to Taiwan, a layover of one hour, and another 14 hours from Taiwan to Houston.

The good news is that all three airports mentioned have free Wi-Fi, especially in Taiwan, which offers fast Internet connections without requiring registrations. The bad news is that free Wi-Fi does not reach some gates at the NAIA.

I paid a visit to Houston to attend the “America First Energy Conference,” set for Nov. 9 at JW Marriott Houston, sponsored by the Heartland Institute, which also provided me a travel scholarship.

The airline’s En Voyage inflight magazine has one table that shows the list of the global airports they serve, distance from airport to downtown, the estimated travel time by train, bus and car/taxi (C), and cost in local currencies. I reconstructed the table and chose only major cities in East Asia, computed the average speed by car/taxi travel, then added data on each country’s international tourist arrivals and tourism receipts in 2016 (see table). 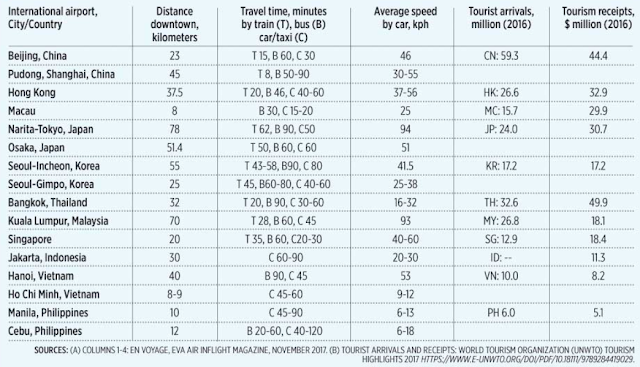 From the above numbers, these preliminary analysis would show:

1. Economies that have quick and convenient transport systems between their airports and city centers have higher tourism arrivals, even if their airports are far away from the cities. These examples include: China, Hong Kong, Japan, Malaysia, Thailand, South Korea, and Singapore.

2. Airports near their city centers have fewer visitors, if transport systems between locations are slow. These examples include: Vietnam (especially Ho Chi Minh airport) and Philippines, both NAIA/Manila and Mactan-Cebu airports.

There are many factors of course why some countries have very high tourist arrivals while others have fewer visitors. These factors are convenience of the airport itself, overall peace and order situation of the country, dominance of the rule of law, proximity of that city/country to other important tourism areas in other cities and countries.

If one lands in Bangkok, one can go to Cambodia, Laos, and Vietnam by land, without the need to take other flights.

Preliminary data show that yes, there seems to have a positive connection or correlation between fast airport transfer and tourism arrivals.

The data on Manila airport is a bit outdated because (1) there are now convenient and fast bus transportaion from NAIA/Manila airport to city centers of Makati City, Pasay City, and Manila and vice-versa, and (b) newly opened NAIA Expressway (PPP project by San Miguel) has significantly cut the travel time by car from the airport’s three terminals to city centers.

Some implications for the Philippines and its infrastructure and tourism policies.

One, NAIAEx tollway is doing good and should contribute to attracting more visitors into the country; thus, further extension of this tollway to BGC and other areas as planned by the project proponents and O&M operators should be facilitated by the government and not subjected to various cumbersome and costly regulations and permitting procedures.

Two, moving the Philippine international airport to a farther but bigger space (Clark in Pampanga, or Sangley Point in Cavite, or currently rice lands in Bulacan, etc.) complemented by fast train and/or buses to city centers will be a win-win situation.

BWorld 163, US energy policies and implications in Asia and Philippines, November 19, 2017
BWorld 164, PES conference amidst reduced risk and uncertainty, November 21, 2017
Posted by Bienvenido Oplas Jr at 1:01 AM

Email ThisBlogThis!Share to TwitterShare to FacebookShare to Pinterest
Labels: tourism