* This is my article in BusinessWorld last November 6, 2017.

The Philippine Economic Society (PES) annual conference is probably the most cerebral event in the field of economics and business in the country. The reason is that in the afternoon, there are eight simultaneous panel discussions on eight different topics within 1 ½ hours, each panel with 3-4 presenters giving technical papers. A coffee break then another 7-8 simultaneous panel discussions, a total of 15-16 different topics with a total of about 50 speakers and panelists, in just one afternoon.

The morning session is devoted to big personalities in government (Cabinet Secretaries, Congress leaders), multilaterals, and sometimes corporate leaders. Except on few cases, I don’t give these speakers much weight because their presentations are generally presented and discussed somewhere else and in media.

This year’s theme is “Growing Amidst Risk and Uncertainty.” I have developed skepticism to subjects with generally pessimistic or alarmist titles so I checked certain numbers to see if indeed there are more economic and social risks and uncertainties now and the near future, both global and national, compared to the past few years.

My skepticism is justified because I found out that there are less risks and uncertainties, not more, now and at least next year compared to the recent past. In particular:

In the ASEAN-6, the same pattern of higher growth this year and the next compared to the past four years except in Singapore.

(2) In consumer prices, projections for 2017 are higher than the last four years for the industrialized west but the uptick is not scary nor alarming. For Asia’s big economies, either there is projected decline or the rise will be mild.

(3) It is in fiscal irresponsibility, in the spend-spend-spend culture of many governments around the world, where long-term risks can materialize because of their persistent budget deficit (revenues lower than expenditures). Still, it is good to see that some welfare states like Germany and S. Korea are posting fiscal surplus this year. (see table) 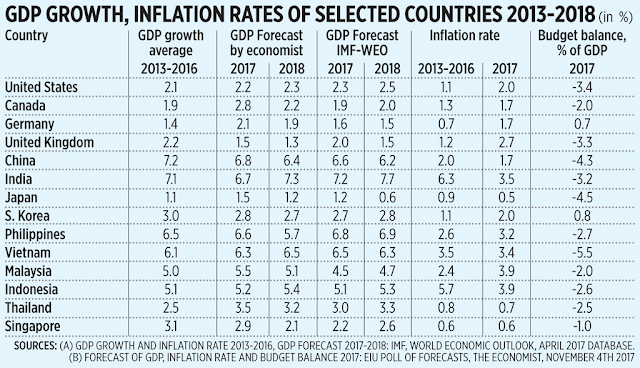 For the Philippines, note that The Economist/EIU pool of forecasters project a crack in growth momentum next year. The past Aquino administration has managed to post really strong growth compared to many countries in the planet, growth momentum until this year but expected to somehow crack starting 2018.

Sadly, I cannot attend the PES meeting this year because I am going to the US for another conference this week and hence, first time in many years that I will miss this big event. If I could attend, of the 15 different topics in the afternoon, I would attend the Energy Policy Development Program (EPDP) panel on “Power Economics: Prices, Generation and Use” or Trade topic in session A. In session B, I would attend the Friedrich Naumann Foundation for Freedom (FNF) panel on “Climate Change and the Economics of Natural Disaster” or Ateneo School of Government (ASoG)’s panel on infrastructure.

I have written a number of papers in this column on the merits of cheaper, stable energy from conventional sources and the lousiness of unstable, intermittent, expensive renewables that depend on subsidies and priority dispatch to make them “viable.” In Germany, there is a growing momentum of policy reversal in climate and energy policies because the German liberals Free Democratic Party (FDP) and politically wild Alternatives for Germany (AfD) have surged high in the recent Bundestag/Parliament elections last September and these two parties are very explicit in questioning continued renewables cronyism and endorsing cheaper, stable energy from coal.

To summarize: (a) There are less risks and uncertainties now and the near future compared to recent years; (b) Endless fiscal irresponsibility by governments will create long-term risks with rising public debt; (c) Dutertenomics of tax-tax-tax aside from kill-kill-kill in its drugs war may crack starting next year; and (d) Climate and renewables alarmism will see slow policy reversals in more countries soon.
---------------