Energy 103, The proposed Jamaica coalition in Germany -- before the collapse

Until middle of this month, there was still hope of a possible “Jamaica coalition” in Germany – Black flag by CDU-CSU, Yellow by FDP and Green by the Greens. I posted these thoughts and news liniks from November 18-20, 2017 in my fb wall, reposting them here.
---------------

Before, Merkel and CDU/CSU were chummy-chummy with Obama in the anti-coal, "save the planet" drama. Then pro-coal, climate realist parties AfD and FDP surged high in the Bundestag elections last Sept, CDU and SDP suffered big time. Now Merkel perhaps realizes that Trump is correct in allowing more coal power for highly-industrialized economies like Germany so Merkel won't give in to the Greens' blackmail of closing all coal plants just to have a coalition govt with them. The danger -- a collapse in negotiation would mean new elections.

"The Greens reject a yearly 200,000 cap on asylum seekers, which is one of the CSU's main demands....
Merkel has proposed to reduce the capacity of coal stations, by 7 gigawatts (GW) by 2020, instead of 5 GW as proposed earlier by the CDU/CSU and FDP, but the Greens insist on a 10 GW reduction.
The FDP and the Greens are also at opposing ends over the so-called solidarity tax, a 5.5 percent tax on incomes, capitals and companies. The end of the tax is a core FDP demand, which the Greens reject."
-- from the EU observer article, Nov. 17, 2017.

Meanwhile, this is fake news from The Guardian “German Greens drop car and coal policies in coalition talks with Merkel”, Nov. 8, 2017.

“It is clear to me that we will not be able to enforce a ban on internal combustion engines by 2030,” the Greens’ co-leader Cem Özdemir told Stuttgarter Zeitung.
The Greens are also prepared to modify their demand that the 20 most polluting coal-fired power plants in Germany should be shut by 2020."
https://www.theguardian.com/world/2017/nov/07/greens-scale-back-policy-demands-german-coalition-talks

The Greens are outright watermelons, green outside, red inside.

Many watermelons and frequent climate junketeers and jetsetters are angry that Trump is not giving them more money for the expensive, thousands participants annual UN FCCC meeting, this year held in Bonn, Germany. Now the watermelons are extra angry that Merkel won't give in to their demands that Germany should close down many of its coal power plants.

"Germany's Merkel dodges coal deadline at climate talks", Nov. 15, 2017.
"Germany generates about 40 percent of its electricity from coal, including the light brown variety called lignite that's considered to be among the most heavily polluting fossil fuels.

"Coal, especially lignite, must contribute a significant part to achieving these goals," Merkel said. "But what exactly that will be is something we will discuss very precisely in the coming days."
http://www.kansascity.com/.../article184694013.html...

The watermelons are a big bunch of hypocrites. They lambast coal yet super-enjoy Germany's industrialization and its 24/7 electricity, 40% of which is from coal power. They also lambast other fossil fuel like oil yet they jetset by the thousands from many countries and cities, their airplanes and cars using oil, not water or solar.

Macron is less hypocrite when he lambasts coal because France is largely dependent on nuke power that produces about 75% of its total electricity supply. Next to Germany in having big coal power supply is Poland, which will host the UN FCCC 2018 meeting.

"Poland ready for SHOWDOWN with EU over climate change as Trump sends 74,000 tonnes of coal", Nov. 16, 2017.
"Prime Minister Beata Szydło has warned MEPs she will "throw it back at them" if they criticise her nation's carbon consumption at next month's EU summit.
And that could set the scene for more stand-offs next year, when Poland hosts the next round of UN climate talks....
The ruling Law and Justice party are unapologetically pro-mining, a belief shared by US President Donald Trump, who visited the country in the summer and said: "Whenever you need energy, just give us a call."
https://www.express.co.uk/.../poland-donald-trump-coal...

"Mrs. Merkel’s failure comes despite astronomical costs. By one estimate, businesses and households paid an extra €125 billion in increased electricity bills between 2000 and 2015 to subsidize renewables, on top of billions more in other handouts. Germans join Danes in paying the highest household electricity rates in Europe, and German companies pay near the top among industrial users. This is a big reason Mrs. Merkel underperformed in September’s election.

Berlin has heavily subsidized renewable energy since 2000, primarily via feed-in tariffs requiring utilities to buy electricity from renewable generators at above-market rates. Mrs. Merkel put that effort into overdrive in 2010 when she introduced the Energiewende, or energy revolution." (Nov. 17, 2017) https://www.wsj.com/articles/germanys-green-energy-revoltgermanys-green-energy-revolt-1510848988 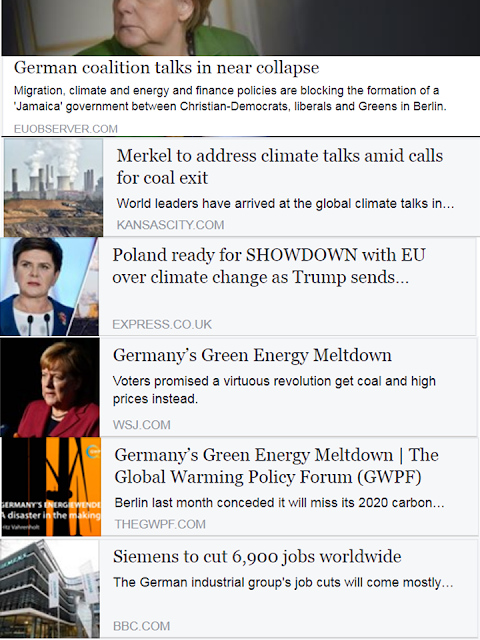 "At the 17-minute mark, Bernd Benser of GridLab-Berlin tells viewers that while grid operator Tennet had to intervene only 3 times in 2002 to avert grid instability, last year he says the number was “over 1000” times — or “three times daily”.

These intervention actions, known as redispatching, cost the consumer about a billion euros last year alone, says Benser. The SAT 1 voice-over warns that more power transmission lines are urgently needed if the Energiewende is to avoid “becoming a sinking ship“. (Nov. 11, 2017) http://notrickszone.com/.../german-media-report-power.../...

"Chief financial officer Markus Krebber said such a unilateral move by Germany, which had just contributed to making a pan-European CO2 trading mechanisms much stricter, would harm the economy and undermine the security of supply.

“Focusing on climate protection goals alone is not enough and will lead to fatal misallocations,” (Nov. 14, 2017), https://www.reuters.com/.../quick-german-coal-exit-would... 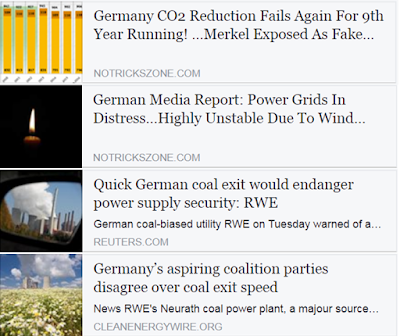