* This is my article in BusinessWorld today.

There is a populist and persistent belief that free trade means weakening, if not, bringing about the death of local manufacturing industries because they will not be able to withstand competition from more advanced economies abroad.

This belief has been repudiated many times in countries including the Philippines. And there is a new paper that repudiates this belief again.

Former NEDA Secretary Dr. Cielito Habito discussed a new paper at the Department of Trade and Industry (DTI) pre-summit roundtable, based on their research at the USAID-funded Trade-Related Assistance for Development (TRADE) Project.

The roundtable was part of the preparations of the DTI and the Board of Investments (BoI) in an important event they are jointly organizing, the “Manufacturing Summit 2016: Trabaho at Negosyo” this coming Nov. 28-29, 2016 at the Makati Shangri-La Hotel.

Besides plenary sessions, breakout sessions to be held will cover seven topics, one of which is International Trade Policy and Free Trade Agreements and Dr. Habito’s discussion was in preparation for this session. I was among those invited by the DTI for the pre-summit roundtable, thanks to Assistant Sec. Rafaelita Aldaba.

In January 2010, the ASEAN Free Trade Agreement (AFTA) became operational. The import tariffs on nearly all products traded across the ASEAN-6 (Brunei, Indonesia, Malaysia, Philippines, Thailand, and Singapore) dropped to 0, some at 5% maximum. What happened to Philippine manufacturing by 2010 onwards? Dr. Habito showed this data (see Table 1).

Ciel also showed slides where Philippine exports have moved up the value chain.

One may also credit the past Aquino administration for keeping with trade liberalization agenda compared to its predecessor Gloria Arroyo administration.

Freer trade benefitted not only the Philippine economy but also almost all other ASEAN countries (see Table 2). 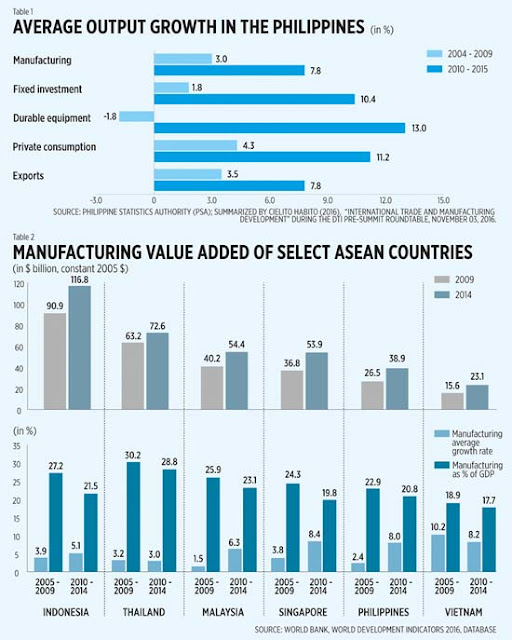 The above numbers tell us the following.

One, the size of manufacturing output of the six countries have expanded significantly in just five years. The Philippines’ has grown from $26.5B in 2009 to $38.9B in 2014.

Some policy measures that the DTI, other departments, and Congress should consider to further improve the country’s manufacturing and trade capacity would be the following:

2. Some factors that deter more investments in manufacturing in the country are outside the scope of DTI, like expensive and unstable electricity supply, slow Internet, poor infrastructure. More competition in these sectors should be encouraged.

4. Over the long term, we should consider adopting unilateral trade liberalization, one-way free trade policy, both in tariff and non-tariff measures (NTMs), and ultimately in services too. Hong Kong and Singapore are good examples of unilateral liberalization regimes, their exports of goods and services are much larger than most countries in the world despite their small population.

5. NTMs as indirect barriers to trade should be relaxed through time and ultimately abolished. The main purpose of trade policy should be consumers protection and empowerment, to allow the local consumers to have more choices in buying and selling, to have more access to more markets and economies abroad.

Bienvenido S. Oplas, Jr. is the head of Minimal Government Thinkers and a Fellow of SEANET. Both institutes are members of the Economic Freedom Network (EFN) Asia.
----------

eToro is the ultimate forex broker for new and established traders.