The ADB released its "Key Indicators for Asia and the Pacific 2016" report nearly two weeks ago. I found these data interesting. These tables are cropped, I removed other countries and years to focus on these important economies in the region.


This is a good summary why the PH and TH, CN, JP and NZ, were among the best performing economies in stock market until last year.

Another group of economies have maintained their high levels of stocks capitalization but in terms of growth and % share of GDP, they performed badly: SK, TW, ID, MY, SG and AU.

In terms of growth rates, overall there was fast recovery in 2010 for many economies after the global financial turmoil of 2008-09, then they tanked somehow. The PH and TH stocks' double-digit growth however, were sustained until 2013. 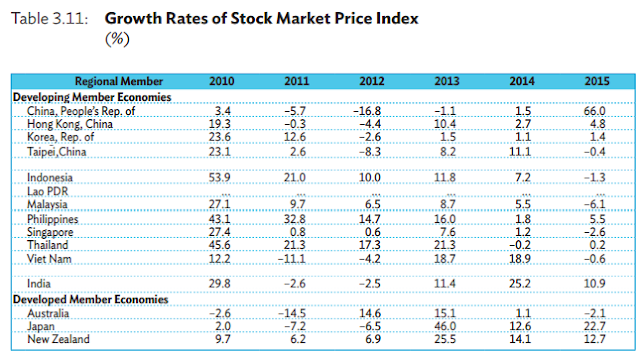 These data show that capital liberalization pays off. Even in period of global financial squeezes, it is not wise for governments and central bankers to resort to capital controls because this will further squeeze and scare those investments that are still in the economy or planning to enter the economy. Capital dips and recoveries, investments up and down, are 100% part of the DNA of capital. Allow and protect, respect them. Soon they will come and stay for the long haul.