BWorld 90, Who should set the energy mix, government or consumers?

This question seems to have a “default” answer: the government and it is time to revisit the premise of government being the central planning body that sets the Philippines’ energy mix.

The Energy Policy Development Program (EPDP) composed of mostly UP School of Economics (UPSE) faculty members as fellows and researchers produced their most recent paper, “Filipino 2040 Energy: Power Security and Competitiveness.” The 52-page long paper projects two scenarios for the Philippines until 2040, the strong/fast growth and slow/mediocre growth, and the projected energy demand and prices based on four policy options. Here are the projected cost of electricity by 2040 based on current technology and two Sensitivity Analysis (SA) that project the cost of variable renewable energy (VRE) on two scenarios. (see Table 1) 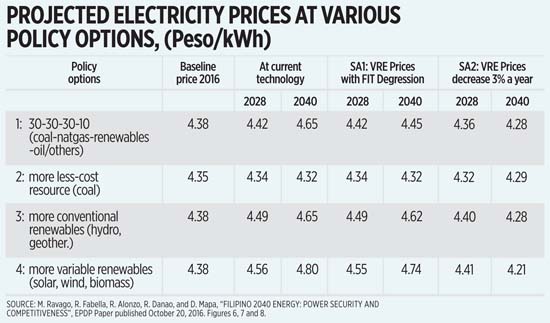 “For example, a 16 GW wind turbine in Scotland requires a grid investment of £4 billion... In Britain, a 34% share of renewables in their generation and transmission imposes a likely cost of £6.8 billion a year, or an extra 38% increase.”

This EPDP paper was presented by lead author, Dr. Majah Ravago during the Stratbase-Albert del Rosario (ADRi) and Foundation for Economic Freedom (FEF) forum on “Affordable Electricity: a Requisite for Competitiveness” held at Oakwood in Mandaluyong City last Oct. 26.

As one of the two reactors during the event, I expressed my disagreement with some of the numbers presented, as indicated on the table.

Even under current technology, the price gap between policy #2 (the current energy mix) and policy #4 (being pushed under RA 9513 or Renewable Energy Act of 2008) by 2040 will be small.

Some areas lost power for five hours, others ten while others for one week or more.

While Australia is 69% dependent on coal, especially the state of Victoria, the state of South Australia is heavily dependent on wind power. When the wind does not blow, wind turbines’ output is zero. When the wind blows too much like the big storm that day, many wind operators shut down and lock their wind turbines to prevent damage, and wind output was also zero, triggering a series of power trips that resulted in state-wide blackouts.

Below are actual electricity production and not just installed electric power capacity for selected economies in Asia Pacific in 2012.

The ADB’s Key Indicators 2016 report has yet to be released as of this writing. Note the wide disparity in energy mix in favor of coal for many of them (see Table 2). Those that are more dependent on natural gas are Thailand, Malaysia and Singapore (84.3%). 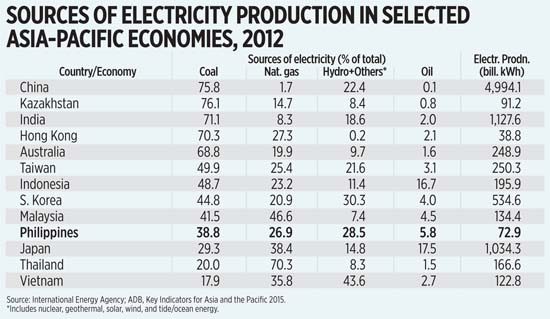 Note that all those countries that are more coal dependent than the Philippines have lower electricity prices than us except Australia because of the latter’s high grid or transmission charges, more than twice that of the Philippines.

Thus, if more coal reliance would result in cheaper, more stable, electricity supplies, why should the Philippine government -- through the Department of Energy (DoE), Energy Regulatory Commission, and even Congress -- impose regulations that will force us to have less coal power and instead, have more intermittent, unstable, expensive renewables?

So, who should set the optimal and consumers-oriented energy mix, the state or the public? The government or the consumers?

Policy option #2 of EPDP should be pursued by the government. The DoE and Congress should step back and respect the consumers’ right to cheaper and stable electricity.