Several issues preoccupy President Rodrigo Duterte’s mind and mouth: the violent anti-drug campaign and murders, his anti-US, anti-EU, and anti-UN expletives and polemics (but later reversing his earlier attacks against these countries and/or multilateral bodies).

After his anti-Obama, anti-US tantrums before and during the ASEAN and related summit meetings, he repeated the same vitriol in his China visit last week, citing his “separation from the US” and that the Philippines is united with China and Russia against the world. As expected, he took back these assertions almost immediately, clarifying that the country cannot afford to be separated from the US the minute he arrived in Manila.

Spouting off these incendiary remarks then taking them back -- characterized as “sugod-atras” in Filipino -- should not be taken literally as advised by the President’s cabinet officials.

However, these unnecessary assertions have real, negative impact on business confidence in the country, especially for massive investment plans and pledges that remain on the “wait and see” mode since the campaign period (February 2016) until today.

Will these outbursts by the President ultimately derail the economic momentum of the Philippines as started by the previous Aquino administration?

The Economist magazine regularly pools some of the world’s biggest investment banks and ratings companies about their global economic forecast and GDP growth projections. The numbers are shown on the table.

This piece made these country groupings in re-constructing the table. Group A are traditional, developed economy allies of the Philippines; B are President Duterte’s “pivot new friends”; C are the major Asian friends and trade partners; and D are miscellaneous. Venezuela is included in D to show how socialism and heavy statism can lead to economic and business decline (see table). 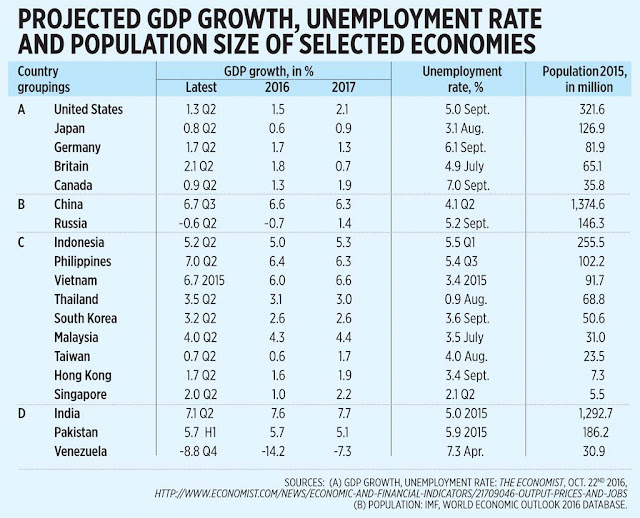 These numbers show us the following:

One, group A remains to have sclerotic growth, they seem to be very lucky to grow 2% or higher. Unemployment rate is high, 5% and up, except Japan. Not shown on this table are the four EU countries which have incurred double-digit unemployment rates in July or August 2016: France 10.5%, Italy 11.4%, Spain 19.5%, and Greece 23.2%.

These figures show that the developed countries cannot be expected to provide more impetus to lead and drive faster global growth. Their capacity to provide more foreign aid, more loans and grants, is also compromised.

Group B has mixed results. China can be expected to lead regional growth and help pull upwards global demand, but not Russia. The latter remains limping due to low global oil prices, petroleum being one of its major export products, among the important factors.

An important ingredient for faster growth is high and young population. Notice above that countries with 90+ million people -- Vietnam, Philippines, Indonesia, Pakistan, India and China -- are growing fast. The US, Japan, and Russia should belong to this category but they are growing slow, partly because they have an old and aging population.

The answer seems to be no for two important reasons.

One, growth momentum is retained as various macroeconomic and infrastructure reforms laid by the previous administration are bearing fruit.

Two, our high and young population of 103 million people as of 2016 has become a potent force to provide the necessary market demand and labor force supply for more investments and entrepreneurial advancement.

So, despite the President’s incendiary remarks plus thousands of murders in the anti-drugs campaign that can potentially disappoint if not threaten big foreign investments planning to come to the Philippines, growth momentum is well in place.

Moreover, if this economic momentum is coupled with presidential sobriety and an anti-drugs campaign that is guided by due process, the country’s growth rate of 7%, or perhaps even higher, is very much possible.