Planet Earth is estimated by geologists and other scientists to be 4.6 billion years old. In that period, the world has experienced a series of warming-cooling-warming-cooling cycles. So global warming and climate change (CC) have been there as natural (i.e., nature-made) and cyclical events. See dozens of paleo-climate data and charts that date back to thousands, millions and billions of years ago here: https://wattsupwiththat.com/paleoclimate/.

Yet for decades now, we have been bombarded by the United Nations and other institutions and individuals who deny nature-made climate change and climate cycle, deny that global cooling can take place after a global warming phase. Owing to such denials, anthropogenic or “man-made” climate change can only be fought via man-made and UN-directed solutions like large-scale and endless subsidies to intermittent renewable sources.

Such is the dominant global belief and being formalized during the annual UN Framework Convention on Climate Change (UNFCCC), like the Conference of Parties (COP) 22 meeting in Marrakech, Morocco from Nov. 7 to 18 this year.

It is another confused document from the UN.

For instance in Figure 14, p.64, the “Key climate hazards identified in the adaptation component of the communicated intended nationally determined contributions” are the following, in order of “hazards.”

In short, the climate “hazards” for the planet according to the UN are more floods, less floods, and no flood; more rains, less rains and no rain; more storms, less storms and no storm. So regardless of the weather and climate, we should send more money to the UN and various government climate bureaucracies, give them more power, more global climate travels and meetings. And they will demonize fossil fuels like coal and oil to “save the planet.”

Such scenarios and proposals are very detached from the realities and needs of many countries, developed and developing alike.

Here are the data from the Asian Development Bank (ADB) released only two weeks ago (see table). 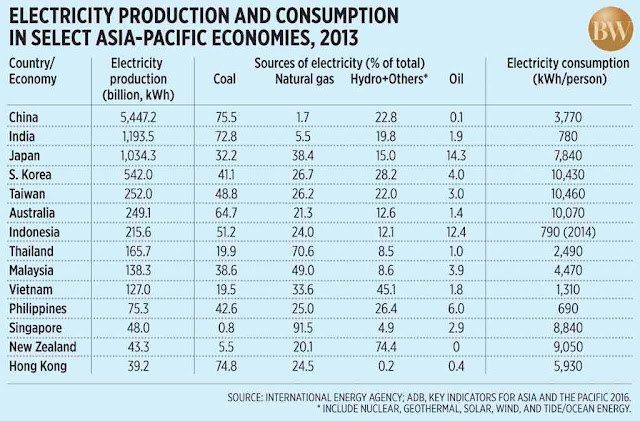 Almost all of the big and developed economies in the region have high reliance on coal and/or natural gas, among the most prominent fossil fuels in the planet. The Philippines in particular has low national electricity production compared to many of its neighbors in north and south east Asia, only 75 billion kWh in 2013. The country also has a very low per capita electricity production of only 690 kWh/person.

Over the past two weeks, I have attended several conferences and meetings and the subject of “expensive electricity” and “insufficient supply of power” would crop up naturally even if the events are not specifically focused on energy.

These events include the DTI’s pre-summit consultation on FTAs and manufacturing industries last Nov. 3, pre-summit consultation on innovation and competitive industries last Nov. 4. One participant said that while garments are labor-intensive, textiles are energy-intensive and they can feel the pinch of high electricity prices.

Meanwhile, during the Philippine Economic Society (PES) annual conference at Novotel Cubao last Nov. 8, the two sessions on energy economics and competition policy have also touched on these subjects including competition in power generation companies and monopolies in power transmission and distribution.

In the Agribusiness commercial legal and institutional reform (AgCLIR) roundtable at Makati Shangri-La last Nov. 11, many agri-business enterprises in the country brought up the matter of high electricity costs.

Last but not the least, during the Asian Legal Business (ALB) -- Thomson Reuters’s Competition Forum at Dusit Thani in Makati City last Nov. 15, one of the speakers, Dr. Raul Fabella of UPSE mentioned pricing under monopoly and duopoly or oligopoly, like in power distribution and generation.

The over-riding concern for the Philippines and other developing economies in Asia and the rest of the planet is how to hasten and sustain economic growth so that job creation and poverty alleviation can also be sustained. Having cheap and stable electricity is a major part in realizing this goal.

Forcing expensive and unstable energy sources to “fight climate change” as pushed by the UN and participating governments is contradictory to the above goal. After all, climate change from warming to cooling in natural cycles did happen in the past and continues to happen today.

Governments therefore, should be more realistic and not alarmist in pursuing that over-riding goal. Less ecological central planning, less energy rationing, less climate bureaucratism would be consistent with poverty alleviation.

Bienvenido S. Oplas, Jr. is the president of Minimal Government Thinkers and a Fellow of SEANET and Stratbase-ADRI.