Posting with permission Dr. Josef "Jop" Yap's take on the recent US elections. The images are my addition, not part of Jop's paper. My brief comments after his article.
-----------


The Russians Did Influence the Outcome of the 2016 US Elections

Many are stunned and dismayed by the victory of Donald J. Trump as President of the United States. He was a severely flawed candidate, the Republican Party was splintered, and he was behind in the polls.

However, Trump actually obtained less votes than Mitt Romney did in 2012 and is barely ahead of the 2008 total of John McCain. In other words Trump did not win the election; it is more accurate to say that Hillary Clinton lost the election. Another way of putting it is Trump did not break through the Clinton firewall of electoral votes, the latter crumbled under its own weight.

Comparing her performance with that of Barack Obama, there was a pool of anywhere between 5-9 million voters that Clinton was not able to motivate to go to the polls. As a matter of fact, the voter turnout in 2016 was the lowest in 20 years. Based on the analysis of FiveThirtyEight and my own rough calculations, if only 1 million of these potential voters had cast their vote for Clinton, she would have handily won in the Electoral College.

The question is what prompted the 5-9 million to not vote? A significant number of the non-voters are likely members of the Bernie or Bust group. This can easily be verified by an appropriate survey. For instance a national exit poll suggests more young adults in 2016 than in 2012 “supported a third-party candidate, did not vote for a presidential candidate, or specifically chose not to answer this poll question,” according to the Center for Information and Research on Civic Learning and Engagement (CIRCLE).

It is evident that supporters of Bernie Sanders were miffed by the contents of emails related to the 2016 Democratic National Committee leak.  A collection of DNC emails leaked to and subsequently published by WikiLeaks on July 22, 2016 prompted the resignation of DNC chair Debbie Wasserman Schultz before the Democratic National Convention. There was palpable tension during the convention and this adversely affected party unity. Subsequently, cybersecurity firms and American intelligence officials stated "high confidence" that Russian intelligence services were responsible for the leak.

There are other reasons that discouraged potential Clinton supporters from voting, e.g. a weak message, the private email server controversy, and voter suppression. However, Americans, including Trump supporters, should be very concerned that the Russian intelligence played a crucial role in the outcome of the election. At the very least this gives some credibility to Clinton’s claim that Trump is a puppet of Vladimir Putin.
- - - - - - -

I googled "Trump and Russia", I chose these six stories from page 1 or top 10 news of google on the subject. Why these six, well I believe they are among the world's biggest media outlets. 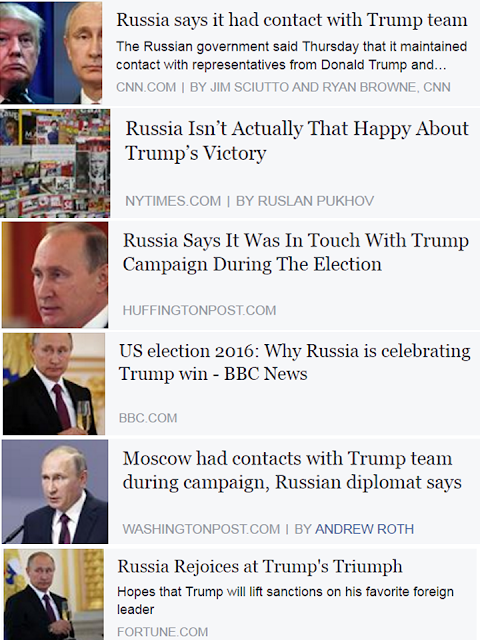 I told Jop that while I subscribe to his suggestion that the low voter turn out especially from the Democrat side was a big factor for the HRC loss, I disagree with his conclusion that Russia and Putin have a big hand in Trump's victory. Especially this sentence, "this gives some credibility to Clinton’s claim that Trump is a puppet of Vladimir Putin."

I believe that Trump's climate and energy policies -- more fracking, more shale gas and oil, more clean coal, opening of Keystone gas pipeline, etc. -- these are sure fire measures to flood the US and global market of more oil, hence cheaper oil, and hence more economic misery for Putin and Russia. HRC would be a good ally for Putin because the lady is for more expensive energy via continued renewables cronyism, more energy subsidies, unfriendly to fracking, etc.

I carefully chose to use "crucial role" in describing the role of Russian intelligence. Indeed there were several factors that disillusioned the 5-9 million (Democrat voters):

1. Weak message of the Clinton campaign;
2. Perception of dishonesty (controversy surrounding private email server)
3. Voter suppression
4. Bernie or bust supporters (who were clearly miffed by the contents of the leaked DNC emails)

Let us assign 2 million votes to each of these factors, which is not a strong assumption. The Russian influence is reflected in item [4]. Yes it is not big but it is crucial in the sense that only a million votes would have tipped the election in Clinton's favor.

Hmmm, Jop got a point there. It is possible that Putin is unhappy with Trump's cheaper energy policies but happy with his non- or less-combative foreign policies towards Russia, the pains from the former are lower than the gains from the latter.

I do not have enough information to confirm or question this hypothesis but for now, it sounds plausible.
-----------