The ASEAN Economic Community (AEC) will materialize by December 31, 2015. Of course there are no business transactions on a new year, so AEC will start on January 1, 2016 or nearly two years from now. The original target of AEC was January 01, 2015 but since some country-members of ASEAN are "not yet ready" in some sectors, a one-year postponement was the compromise move.

Last Thursday, February 13, I attended a forum on "In Sync: An Evaluation of the ASEAN 2015 Integration" at my alma mater, the UP School of Economics (UPSE), organized by my student organization then, the Economics Towards Consciousness (UP ETC). Speakers were Dr. Josef "Jop" Yap, a Professor at the school and past President of the Philippine Institute for Development Studies (PIDS), and Dr. Lei Lei Song, Principal Economist at the Office of Regional Economic Integration (OREI), Asian Development Bank (ADB).

Below are three of the many slides presented by Jop. 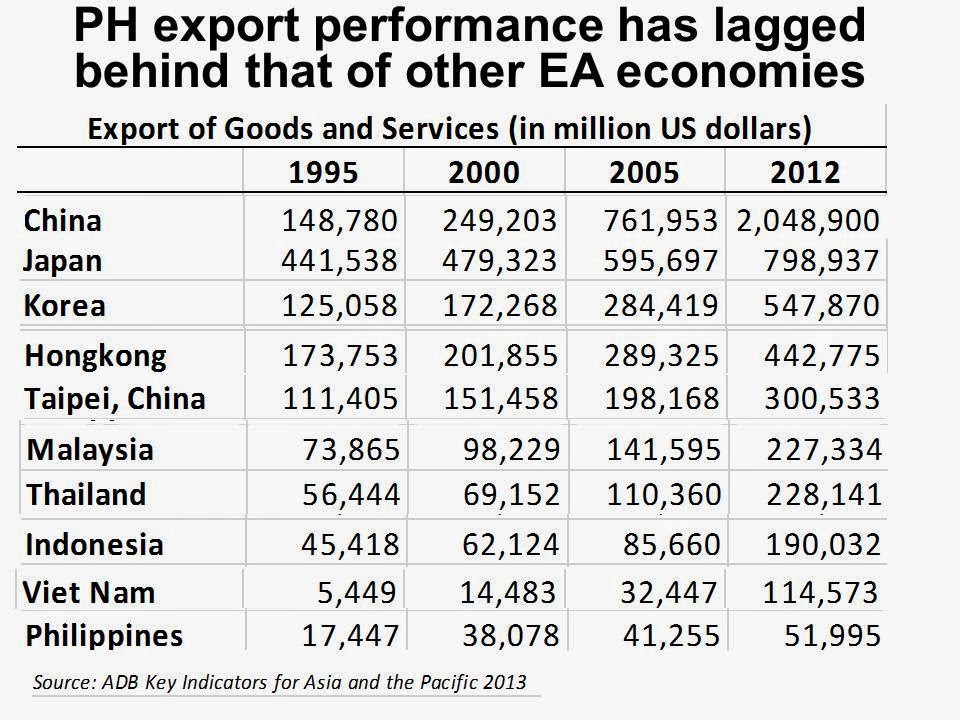 This table affirms what Jop has been trying correcting one urban legend, that after WW2, the 50s and 60s, Philippines was "2nd only to Japan" economically, referring to per capita GDP. That is wrong. At least four neighboring countries have larger per capita GDP than the Philippines -- HK, Singapore, S. Korea, Malaysia. 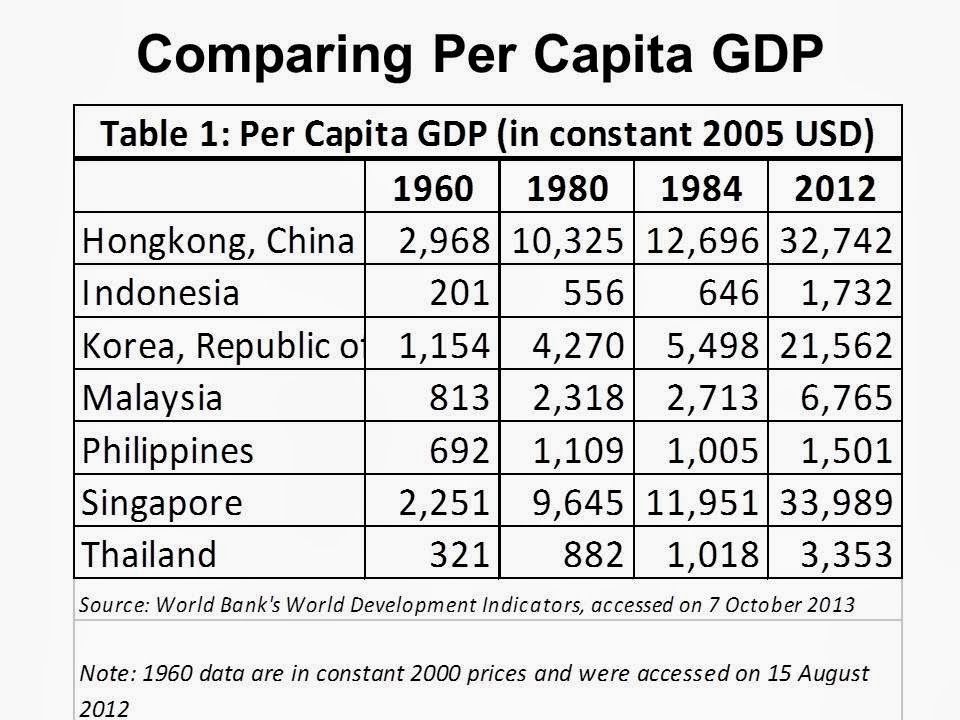 Another table showing that the Philippines is not able to optimize its integration with global business and capital. Even socialist Vietnam has more than double foreign direct investment (FDI) that we got in 2012. 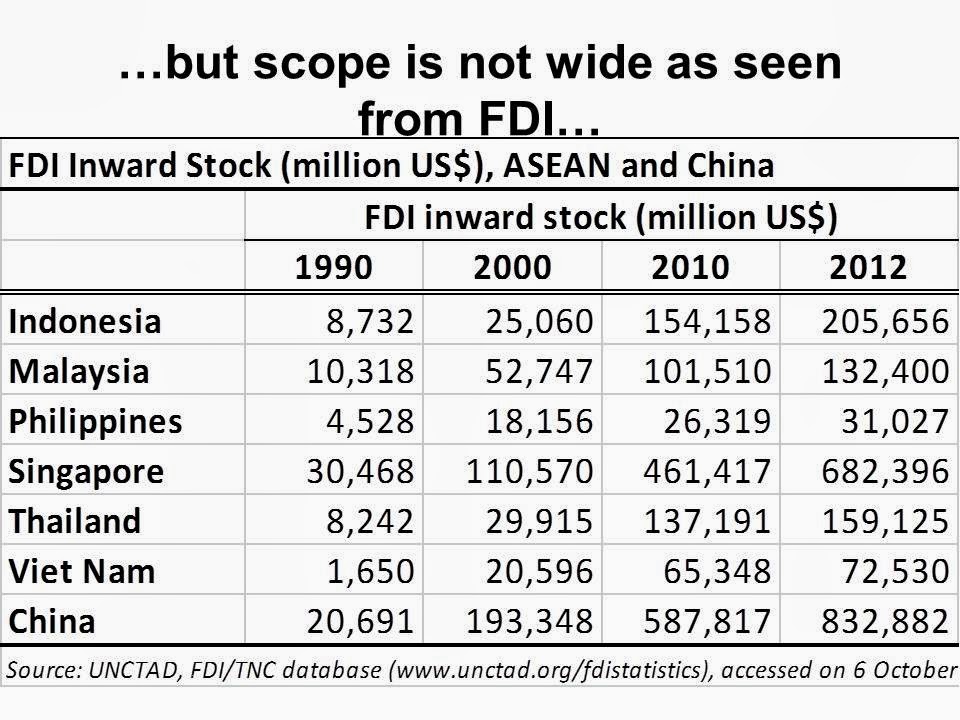 The AEC will have a combined consumer base of around 670 million people, twice the US population. The common market (but no common currency like the EU, thanks) will be composed of three major components:
* ATIGA – ASEAN Trade in Goods Agreement
* AFAS – ASEAN Framework Agreement on Services
* ACIA – ASEAN Comprehensive Investment Agreement

Some key policy measures to be prioritized by 2015 are:

Then after 2015, the priority measures will be:

Before the forum started, photo with Jop and his wife, Dr. Ermi Figueroa-Yap. Ermi was my roommate along with Dr. Butch Lanzona of Ateneo Economics Department, in one room at the school when I was the research assistant of Dr. Florian Alburo in the mid-80s. Jop was finishing his PhD Econ at that time, I think. 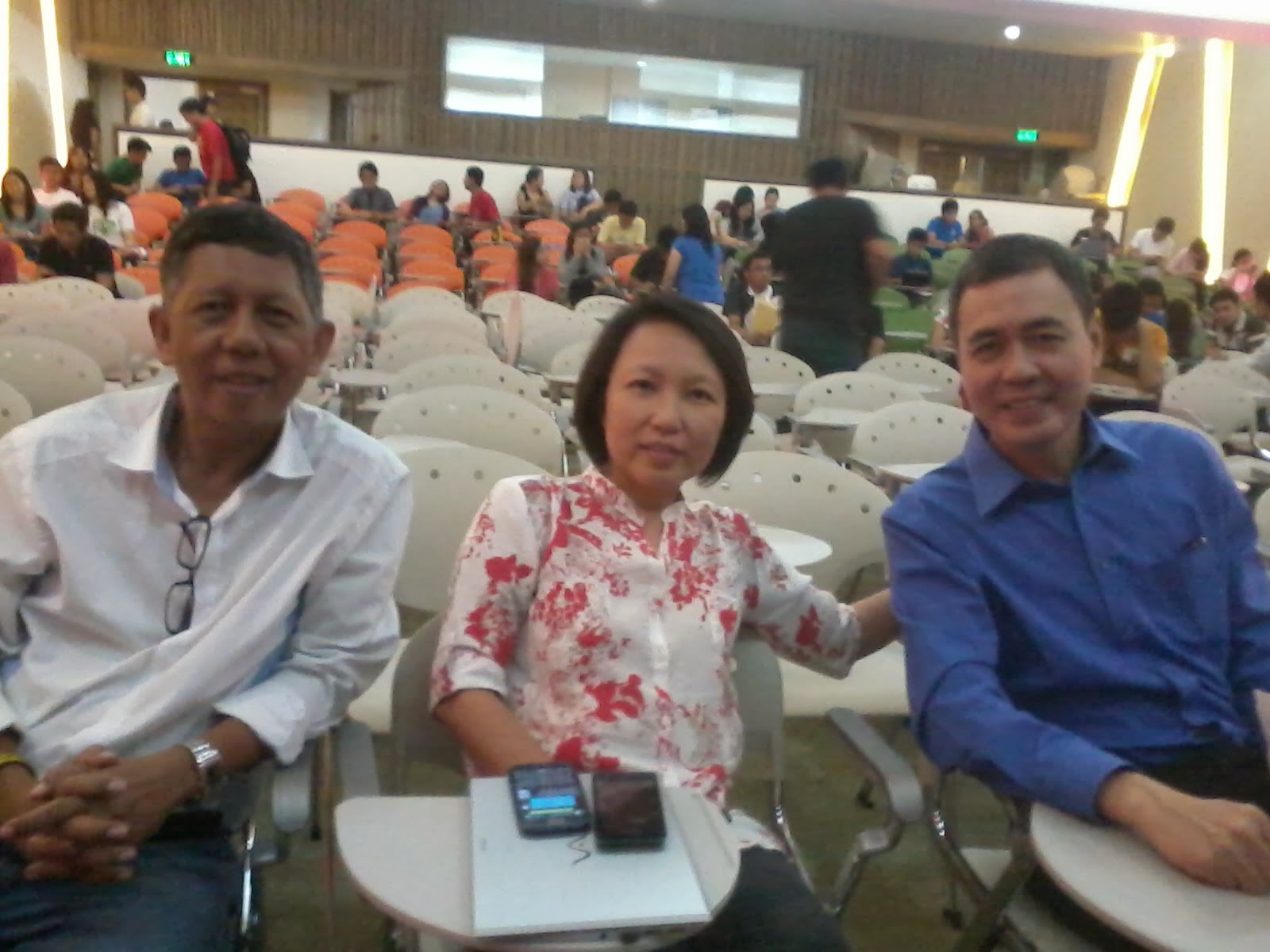 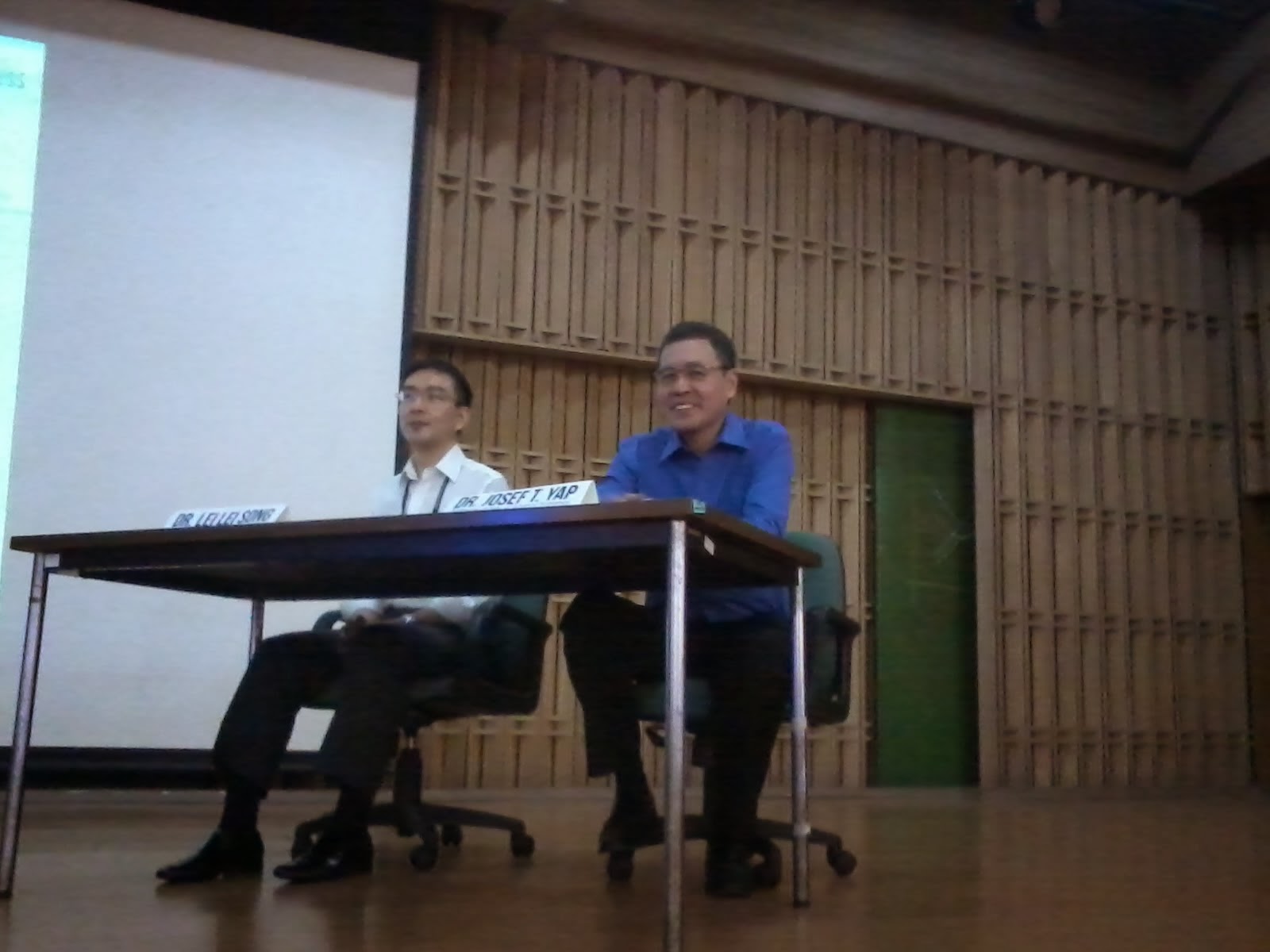 Some of the early birds at the forum. 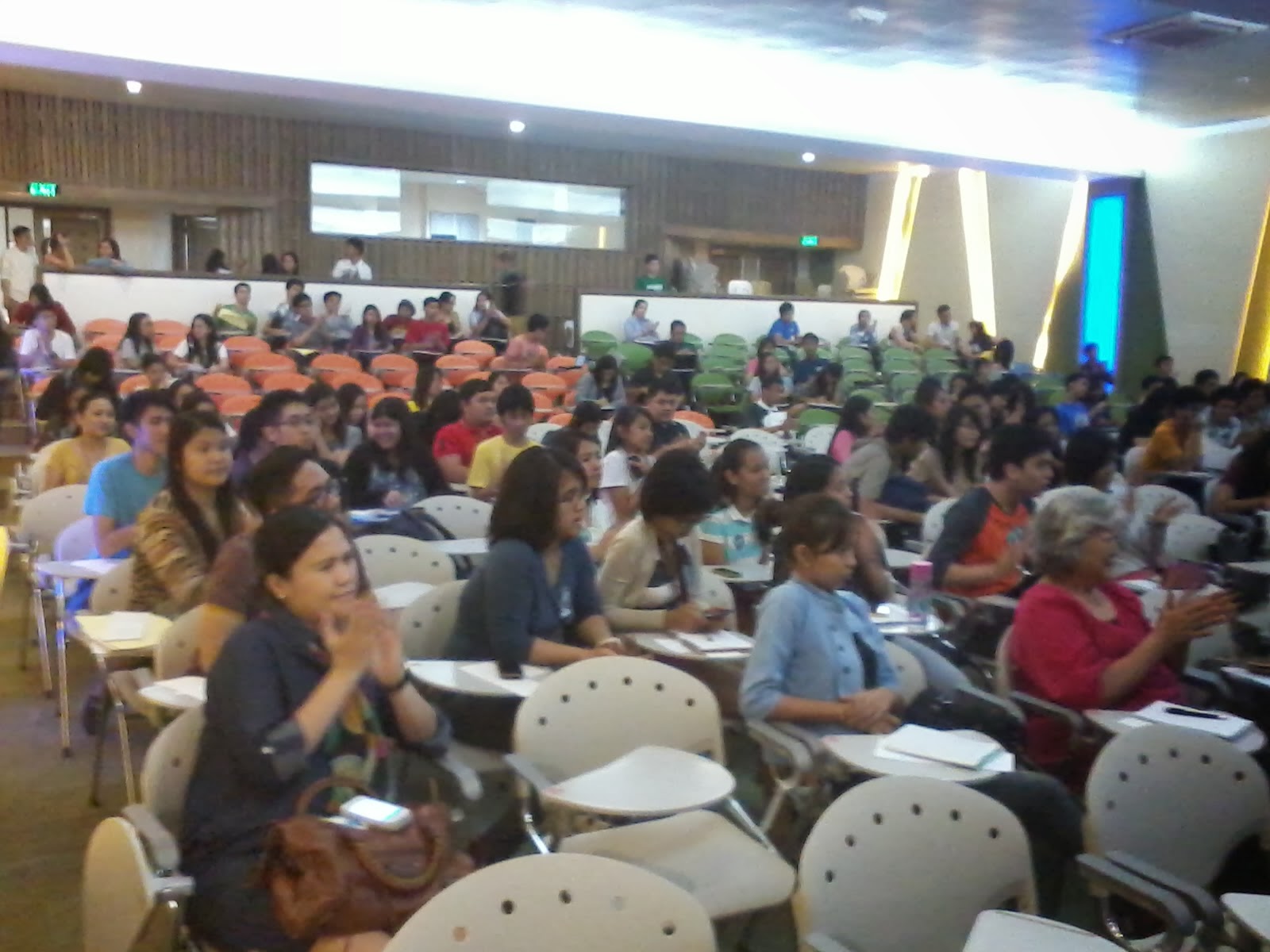 Some say No, that international trade should be kept out of government hands. This looks sensible because in reality, neither governments nor countries trade with each other. People do, and when people engage in trade and voluntary exchange, the requirements and specifications are simple and unique to their specific needs. When governments come in, some less relevant factors are brought into the equation.

But I recognize that a "zero government in trade" (anarchist position) is impossible, next year or next 20 years or beyond. Having FTAs and EPAs are the second-best choice that free marketers can support.
-----------