Some big infrastructure projects in Metro Manila will start tomorrow, especially the extension of the skyway  that will connect the South Luzon Expressway (SLEX) to North Luzon Expressway (NLEX). Our house is not far from this project, so somehow we will be affected by the heavy traffic, but am not complaining. 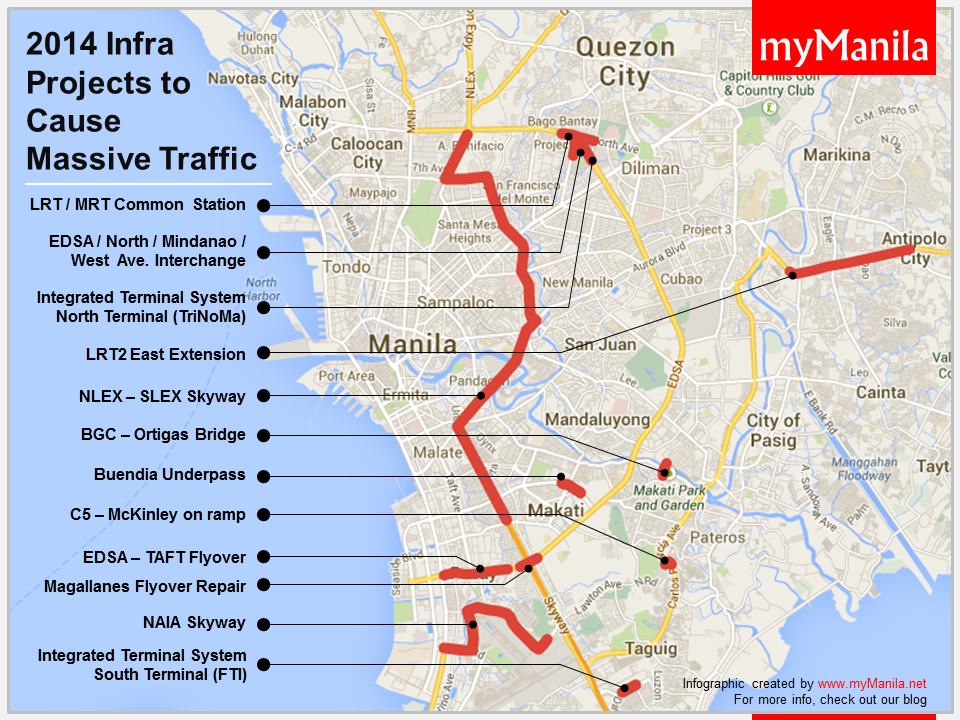 That map is from http://www.mymanila.net/. Copied from MMDA I think. Here are the details of those projects. I re-arranged the list starting with Makati, where I live :-)


These infra projects are important. They should have been started yesterday, not today. The traffic congestion will worsen. I remember when the Ortigas interchange was being constructed, about two  decades ago. Lots of whining, complaints from the public, some even suggested not to pursue it because of the heavy traffic that was created, up to 4 or 6 lanes were affected. We have benefited, greatly, from that infra since then. The huge infra projects starting tomorrow will definitely reduce our productivity somehow, with more time spent on the road than in the offices or factories or schools, but the increase in productivity by 2016 or 2017, when they are done, will be tremendous. Tiis lang tayo sa ngayon.

I also support the plan to collapse school sked to only four days a week, at least in Metro Manila. With a resident population of about 12 million, becomes 13-14 million on weekdays as some people who live in nearby provinces (Bulacan, Rizal, Laguna, Cavite) would troop to the metropolis to work or study or for entertainment, there is no other sustainable choice for public infra but go vertical: more skyways, more tunnels, more interchange, more elevated U-turns. Traffic is an engineering problem with engineering solutions.

One implication here is that the Metropolitan Manila Development Authority (MMDA) and the Department of Public Works and Highways (DPWH) should shrink their manpower, or at least stop further hiring. Any rise in their budget should be used only for actual infra projects, things which do not need 13th month pay, sick leave and vacation leave with pay, holiday leaves, even threat of labor strikes, to continue functioning.

What about the people currently working in those government agencies, or other people aspiring to work with them? Faster mobility of people and goods would mean more business activities, more job creation and expansion in many private enterprises.

Good thing about the skyway is that it is privately-funded and hence, will not require more tax money to be constructed. When the project is done, maintenance will also not come from taxes but from tollway revenues. Government can actually shrink in certain infra projects. Government will refocus its resources, to protect contracts between and among people and enterprises, enforce the rule of law.
-----------

Thanks for sharing our infographic!

Our sources actually do not include the MMDA but instead the PPE site and DPWH.

As of Feb 14, the MMDA launched their own project tracker here: