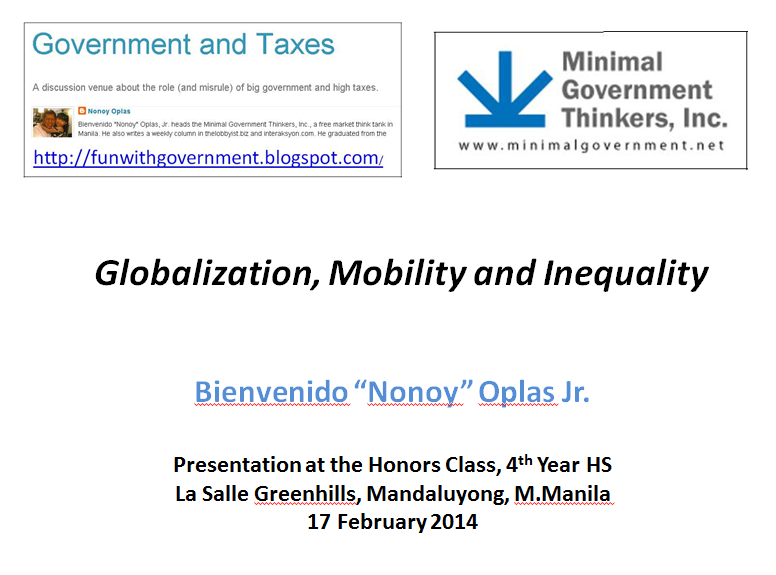 Some 40+ students attended. They have regular guest speakers for their high school economics class. 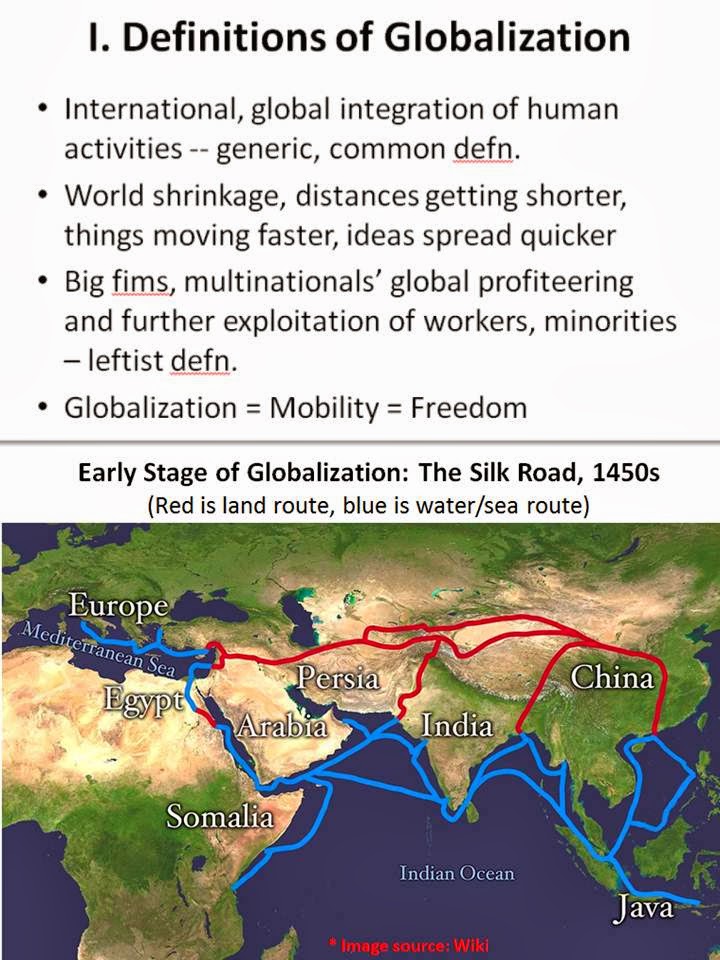 My outline was simple:
I. Definition, Theory of Globalization,
II. Goods and Services Mobility
III. Inequality, and
IV. Concluding Notes.

I started with some definitions of globalization, from the generic to leftist to my own. That globalization and exploration of other lands outside one's birth place seems to be part of human nature, but the more pronounced area was the "silk road". 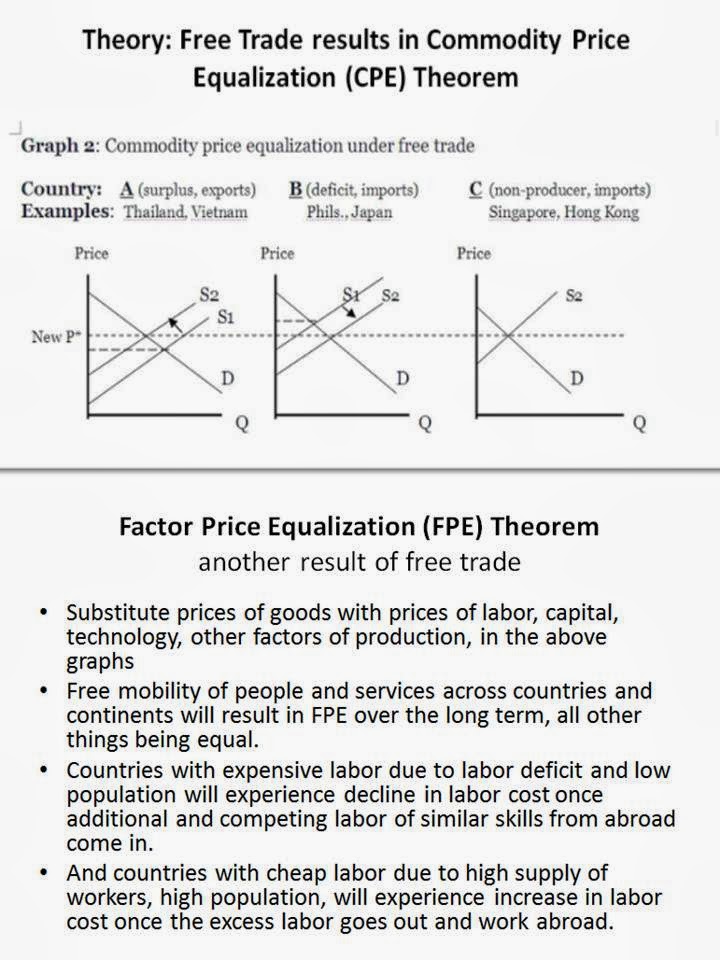 Part II is about some data on international trade and Philippines exports data. This table on East Asian exports is from Dr. Josef "Jop" Yap of UPSE, in his presentation last week about the ASEAN Economic Integration. See Free Trade 33: ASEAN Economic Community 2016. 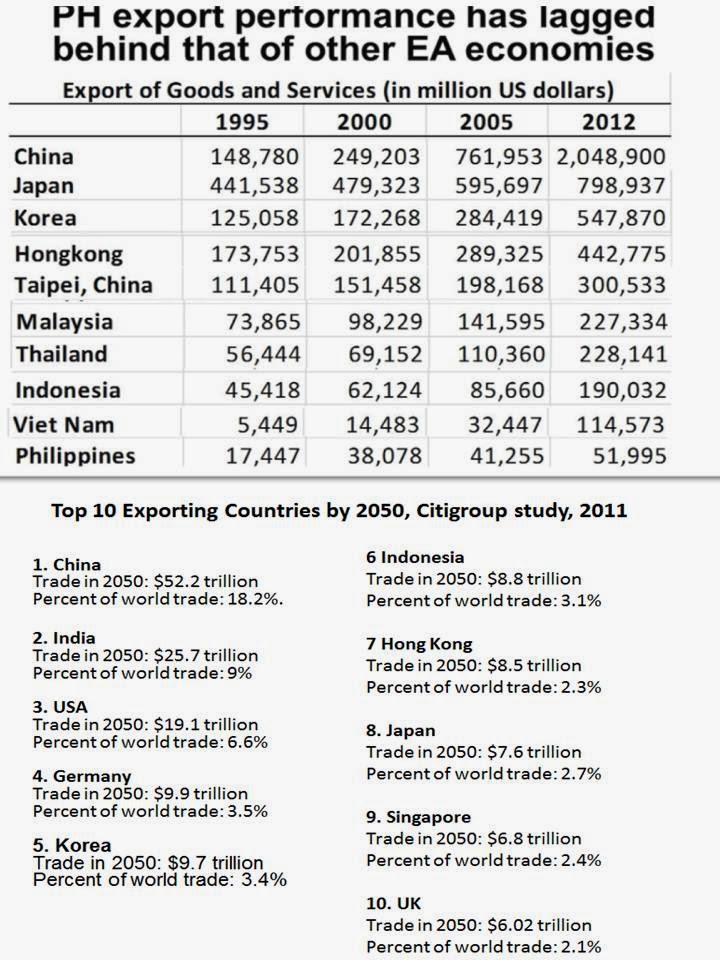 On trade and rice smuggling, I said that to a certain extent, rice smuggling is good because it approximates cheap, free trade price, compared to a full protectionist price. But since it is against the law, that makes smuggling wrong. The solution is to change the law on rice protectionism, to remove tariff and non-tariff barriers in rice imports. 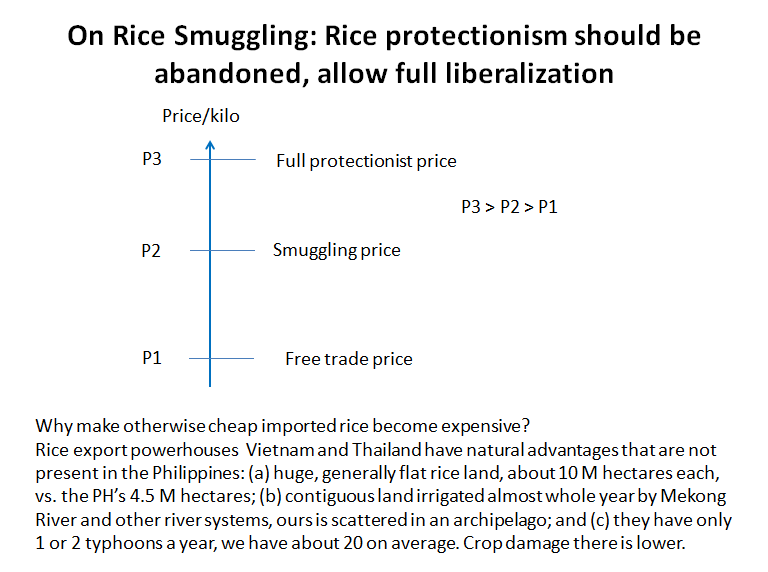 Part III is about Inequality. I said that the anti-globalization groups highlight the rising inequality among people and among countries with more trade and investment openness. Somehow they are correct because globalization and free trade will result in more efficiency + more inequality.

About 20-30 years ago, the Filipino poor and even the middle class could not afford a landline, much less a cell phone,  the rich can own several units of thick, heavy/bulky mobile phones, several cars. Now the Filipino poor, from ordinary jeepney drivers to farmers have cell phones, more sophisticated kids can even have smart phones, gift from some relatives or godparents. The super rich use hi tech mobile phones, can own several private choppers or jets.

I added that inequality is here to stay because there is no limit to what very efficient, very intelligent, very hard working people can do and achieve. Thus, the upper range of individual or family income will keep rising, indefinitely, and that all efforts worldwide to control or limit inequality in the past are failures, and will be so in the future. 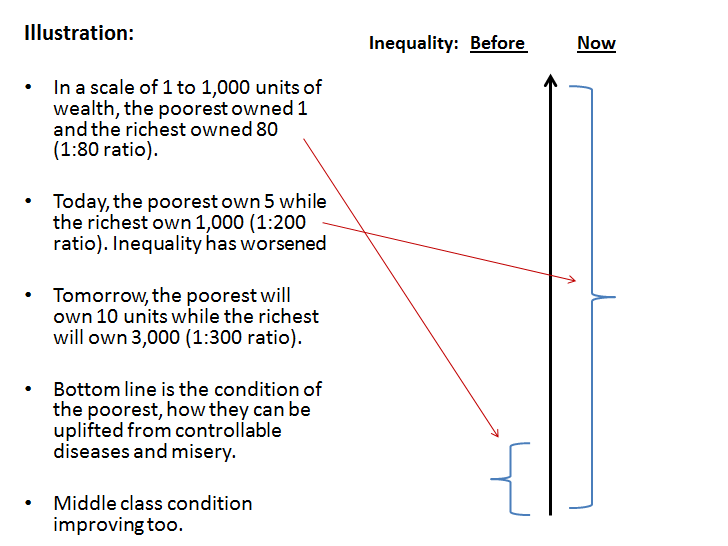 What the anti-globalization groups do not show or recognize is that human welfare overall is actually improving with more globalization and openness to mobility of people and goods. Case of healthcare. 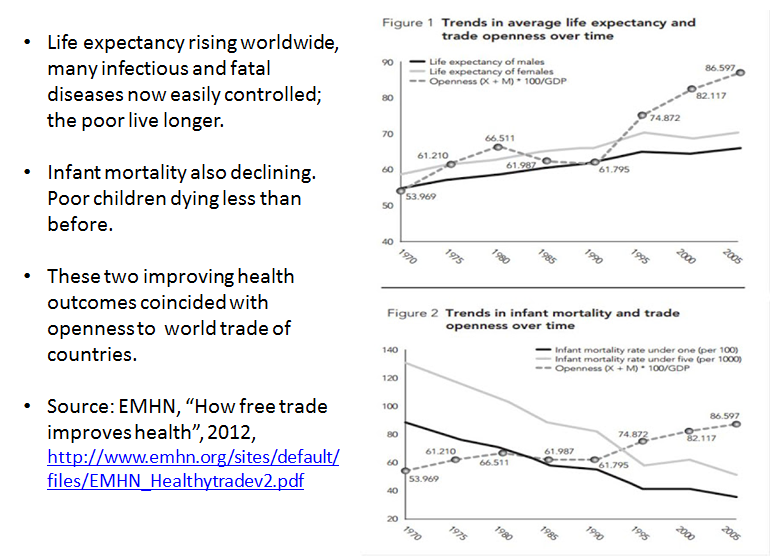 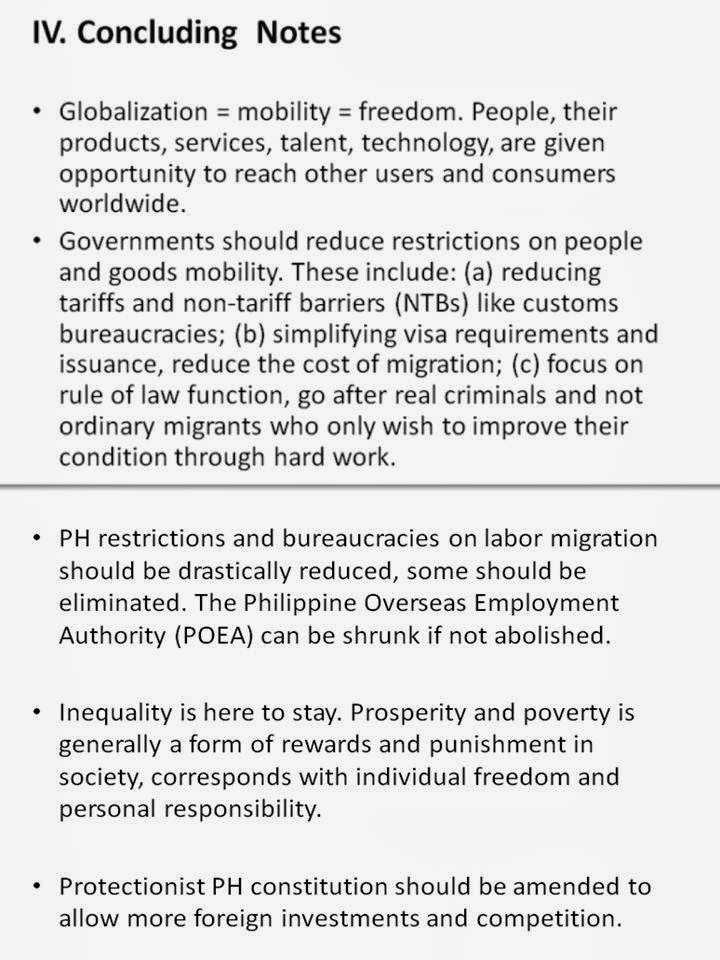 During the open forum, among the questions raised by the students were:


1. With more globalization, isn't the Filipino identity be covered or erased through time?
2. How to control rice smuggling, reduce inequality?
3. Mobility and globalization often results in brain drain of poorer countries, how to control this?
4. How to strengthen competitiveness of people in poorer countries under intense global competition of workers and enterprises?

On #1, I said No. On the contrary, globalization allows the Filipino identity to be highlighted or more known worldwide. Examples are Filipinos who excel like Michael Martinez at the Winter Olympics, the Filipina caregiver in Israel who won the "Israel Got Talent" competition and beat all the local competitors, Manny Pacquiao, etc.

#2, answered above. #3, I argued that "brain drain" is true but it is only a temporary problem. When young Filipino doctors, nurses, etc. go abroad to work, many of them will come back as skilled physicians and other professionals, or they come back not as doctors or engineers but as entrepreneurs with plenty of savings and put up their own clinics and hospitals and hire more professionals and workers. That is "brain gain", so that overall result, the net result is more beneficial to us.

#4, Education, formal and informal, schooling or via short-term trainings and web research, will make people become more skilled and hence, more competitive. Removing barriers to more competition, like the Constitutional provisions limiting or banning foreign investments in many sectors of the economy, will also help.

The certificate, thanks. It is accompanied by a Red Ribbon cake. 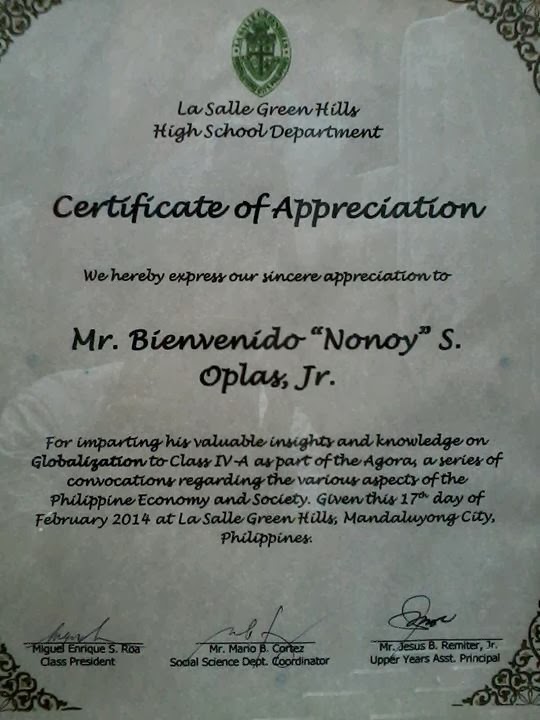 Thanks Mike Roa and your classmates. I hope that you learned new things from my talk yesterday. Please send me photos too, cheers.