There have been a number of political noise about the corporatization and modernization of the Philippine Orthopedic Center (POC). Many groups are opposing its “privatization” with lots of street rallies and the petitioners going to the Supreme Court opposing the said “privatization.” 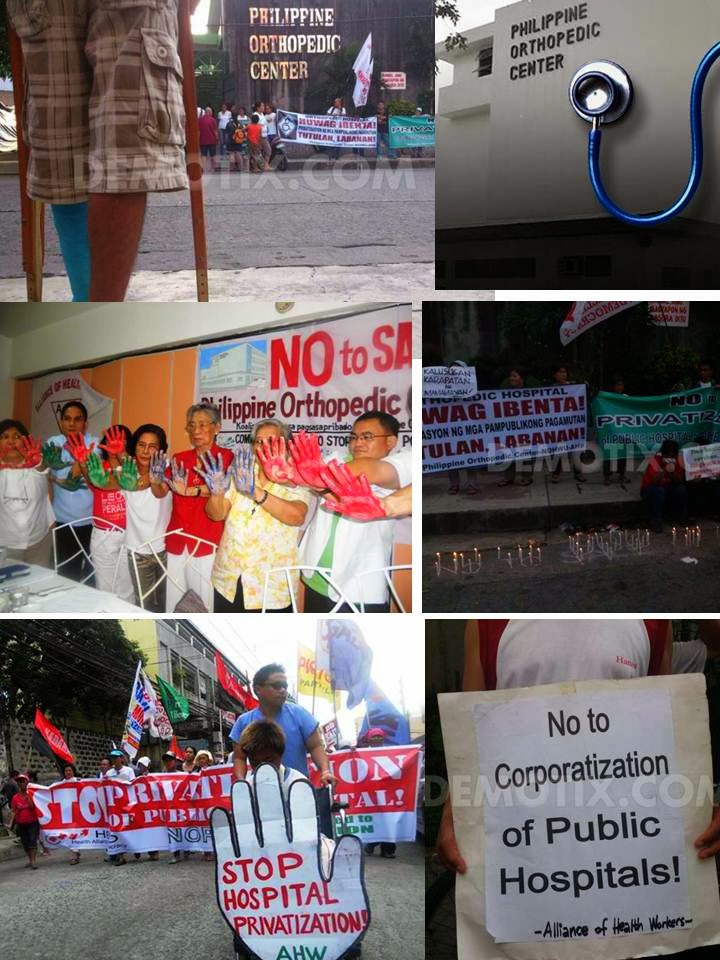 This is a typical disease of confusing and equating corporatization as privatization. The former means the government will just create a board relatively (but not fully) independent of Malacanang and Congress, with private sector presence in the board as they will inject their own money. The DOH Secretary or his/her representatives will still be on the board.

Here is one news report, more objective and non-emotional.

The Orthopedic Center PPP,,, involves the construction as well as operations and maintenance (O&M) of a new 700-bed-capacity tertiary orthopedic hospital in the National Kidney and Transplant Institute compound in Quezon City.

It is a 25-year contract with construction is expected to take two and a half years, and the remaining 22.5 years allotted for O&M.

POC will move out of its Banawe location to the Kidney Center, still in Quezon City. In exchange, the government and DOH will:
(a) get new, modern hospital at no cost to taxpayers,
(b) bigger hospital with 700 beds (vs current ____ beds),
(c) poor and sponsored PhilHealth members will get 420 beds under no balance billing (NBB) while 70 beds for indigents, non-PHIC members, and
(d) after 25 years, DOH will own this hospital and may choose zero private sector participation, back to nationalization/centralization.

The POC private sector partner will make money from (a) the land to be vacated by the current POC in Banawe, and (b) operating the POC for 22.5 years, particularly on the remaining 200 beds that are not for (i) PHIC NBB and (ii) indigents, full charity patients.

This is not a bad deal, unless there are other hidden arrangements. As a taxpayer, this is favorable to me. DOH will have a new hospital at no extra cost to me. If the bidder will put up a residential condo in the current POC in Banawe, that means additional housing units, less squatters or less rentiers in non-high rise houses. When more demand is met by more supply (of houses, etc.), then the price of that commodity will stabilize.

1. The Philippine Children’s Medical Center (PCMC, aka "Children's Hospital"), currently a government corporation,  to be corporatized modernized too, its current two-storey structures be demolished and a new, high rise hospital be constructed, to accommodate more children patients, at no substantial cost to taxpayers.

2. AFP headquarter with golf course to get out of its prime location in QC, they sell or privatize the land, AFP gets the money and move elsewhere cheaper with lots of extra money for AFP modernization, at no extra cost to taxpayers. Win-win condition.
---------

Nine firms have so far expressed interest in bidding for the multi-billion-peso project to build and operate the new Philippine Orthopedic Center under the government’s flagship infrastructure program.

“Nine firms have expressed interest in bidding for the project during the pre-bid conference last Friday,” Health Undersecretary Teodoro Herbosa said in a phone interview Monday, referring to the P5.6-billion project to modernize the country's orthopedic center.

According to Herbosa, who heads the Department of Health's PPP initiatives, the firms are:
·         Metro Pacific Investments Corp.;
·         Megawide Engineering Excellence and the Strategic Alliance Holding Inc.;
·         Siemens, Inc. Healthcare Sector;
·         GE Health Care General Electric Phil. Inc.;
·         Sta. Clara International Corp.;
·         Mount Grace Hospital Ventures;
·         Philips Electronic and Lighting Inc.; and
·         Data Trail Corp.
The Health official noted that prospective bidders have until February 25 to buy bid documents. The deadline for submission is on March 21 and awarding will be be held after the election in May.

“We want the groundbreaking of the project in December,” Herbosa said.

The Orthopedic Center PPP – approved by President Benigno S.C. Aquino on Sept. 8 – involves the construction as well as operations and maintenance (O&M) of a new 700-bed-capacity tertiary orthopedic hospital in the National Kidney and Transplant Institute compound in Quezon City.

It is a 25-year contract with construction is expected to take two and a half years, and the remaining 22.5 years allotted for O&M.

Herbosa, meanwhile, clarified that the PPP initiative “does not aim to privatize” hospitals  rather a scheme tapping the private sector to help government hospitals provide quality health care they were mandated to

“Under the provisions of the bid documents, the winning bidder is required to reserve 420 beds exclusively for [state-insurer's] PhilHealth-sponsored patients under the ‘no balance billing’ scheme and 70 beds for indigent patients,” a statement released Monday read.

“Most of the poor go to government-run health facilities in their time of need and they deserve no less than the best care from these public facilities,” Herbosa was quoted as saying in the statement.

The Orthopedic Center PPP is one of eight PPP projects are in advanced stages of bidding. Only two PPP projects have so far been awarded since the program was unveiled in November 2010.

The PSIP Phase 1 – which involves the design, finance and construction of about 9,300 classrooms in four regions in Luzon – is the second PPP project to be awarded by the Aquino administration.

Gov’t agencies ordered to comment on petition vs hospital privatization

THE SUPREME COURT (SC) has ordered government agencies to comment on a lawsuit questioning the impending privatization of the Philippine Orthopedic Center (POC).

SC Spokesperson Theodore O. Te said in a text message that the respondents were given 10 days to comment on the petition for review filed by health workers and party-list lawmakers last Feb. 3.

In a 62-page petition for review and prohibition, 26 individuals -- composed of health workers, POC patients and employees, activists, and party-list legislators -- sought to nullify the award given to the consortium of Megawide Construction Corp. and World Citi Medical Center.

The consortium was likewise ordered to comment on the petition.

The petitioners said the government committed grave abuse of discretion when they relinquished health care -- a basic social service -- to a private entity when they allowed the privatization of POC. “The privatization of the Philippine Orthopedic Center will result in the denial of medical services to thousands of Filipinos thereby violating international covenants and constitutional provisions recognizing the right to health,” the petition stated.

“The state is duty-bound with ensuring the people’s right to health. To abdicate, surrender or relinquish such basic duty and responsibility and pass it on to private entities in any guise or form is clearly a grave abuse of discretion,” it added. --
--------